You Should Know: Dave English

The manager of membership and development at the Greater Pittsburgh Arts Council talks about hosting the “Unemployment Show,” his degree in puppetry and becoming “Pittsburgh-famous.” 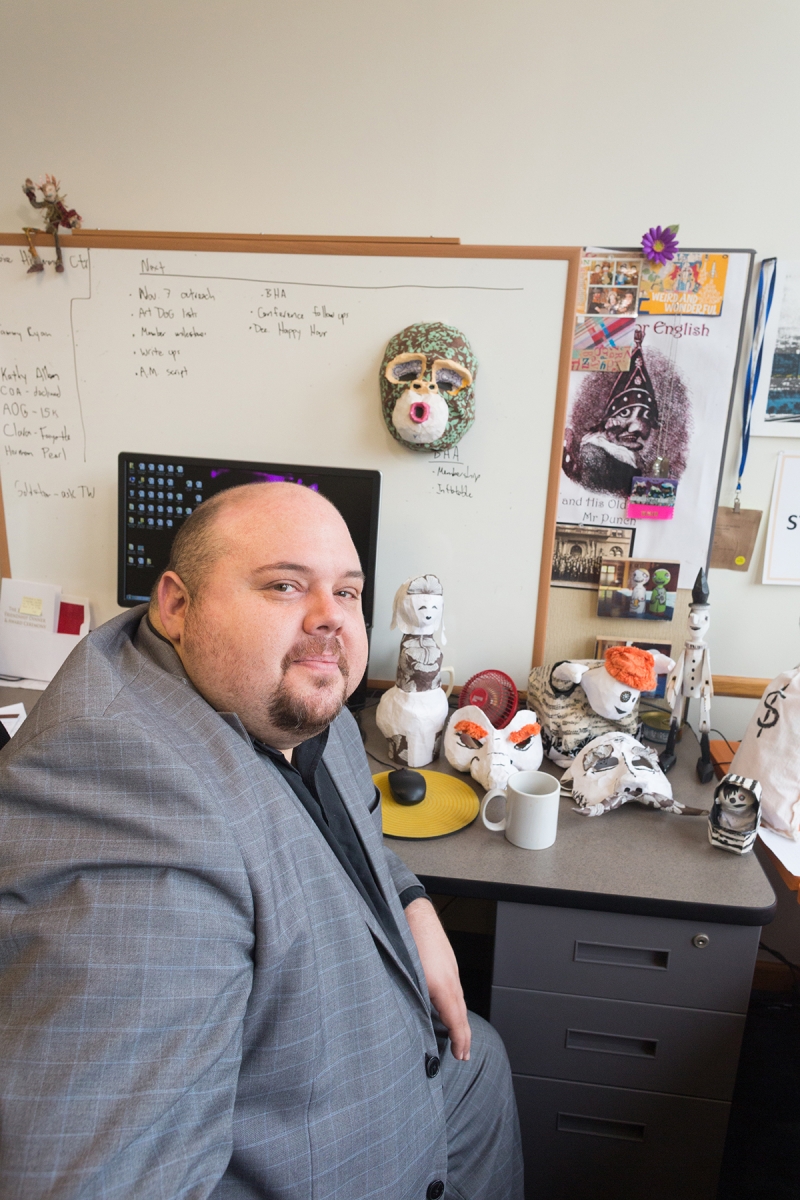 Dave English has worked in more fields than many people. He’s been a substitute teacher. He’s tended bar. He’s worked in sales and at Conflict Kitchen. He drove a casket-delivery truck.

Yes, the artist and comedian says, obtaining a degree in puppetry does not necessarily provide a direct career path.

The 37-year-old Lawrenceville resident jokes he became “Pittsburgh-famous” partially through his stand-up “Unemployment Show” in the late 2000s at the Waffle Shop in East Liberty. That connected him with many people and led to jobs in the art world, including his current role as manager of membership and development at the Greater Pittsburgh Arts Council.

After graduating from West Virginia University, English traveled the country for a few years working at odd jobs before relocating to Prague to teach English. He returned to Pittsburgh to be near his parents and sister, who at the time lived in Oakmont.

“When I was 28 I came to appreciate [Pittsburgh] and realize I had taken it for granted,” he says. “And I found a lot of opportunities in the arts.”

In 2007, English founded the Schmutz Co. with Don Orkoskey, whom he met while working for a credit bureau. The two started helping children create their own stop-motion animations at the Children’s Museum of Pittsburgh, Children’s Hospital of Pittsburgh of UPMC and other children’s and arts organizations around town, and they continue to work on new projects.

How did the “Unemployment Show” come about?
I was truly unemployed, and I said, “I’ll do a stand-up about it and bring in guests and do a Q&A with people I wanted to emulate or work for.” One was an officer at the Sprout Fund who I ended up working for. I also interviewed people who were doing something interesting or were basically unemployable.

You joke that one of your jobs was as a “fake local celebrity” — you’re “Pittsburgh-famous.” How does one become Pittsburgh-famous?
There should be a form you fill out. Pittsburgh’s pretty permissive and accepting, and I think if you’re willing to put yourself out there people just go with it.

How do you know when you’ve made it?
It might be the amount of mail you get or if people ask you for things while you’re out and about: “Help me with this.” “We want a puppet.” “How about a dog fashion show?” “We want a grant for an urban bee-keeping fresco jamboree for geriatric hipsters. You’re the guy.” I’m the guy.

A dog fashion show?
When I was hired at GPAC seven months ago, I was told what we’re really building up to is the Arts Day of Giving [on] Oct. 2. It was a big success. We helped raise almost $1.5 million. We saw more individual gifts than ever before, which means more people gave to the arts and more people care about the arts. I was given a directive to find a way to make it fun, and we came up with an art dog fashion show. Our member organizations and individual artist members were invited to create a costume or fashion piece for a dog that they sponsored and have it participate in a dog fashion show.

What did your parents say when you told them you were going to major in puppetry?
I called my mom, and after a moment of silence she said, “I’m not totally surprised by that.” And I said, “How are you not surprised by that? That’s a ridiculous thing to call someone and say.” And she said, “When you were 3 years old, you were watching ‘The Muppet Show.’” Apparently I said, “I want to be one of those guys,” and she said “You can’t be one of those guys because they’re made of fabric,” and she explained the concept of puppetry to me.

Any specifics?
As an artist, I have about five projects I’ve had up my sleeve that I’ve wanted to do for awhile that I plan to execute in the next few years . . . A project that I’m hoping to pull off next year maybe, as early as the spring, is an installation art project based on the tradition of the western Pennsylvanian cookie table. I’ve wanted to do this idea for a while and, you know, cookies. That’s a project that would combine installation artists and grandmas who make cookies.

This article appears in the December 2014 issue of Pittsburgh Magazine.
Categories: Arts & Entertainment