You Should Know: Clayton Merrell

His public artwork “The Sky Beneath Our Feet” breathes new life into the floor at the Pittsburgh International Airport. 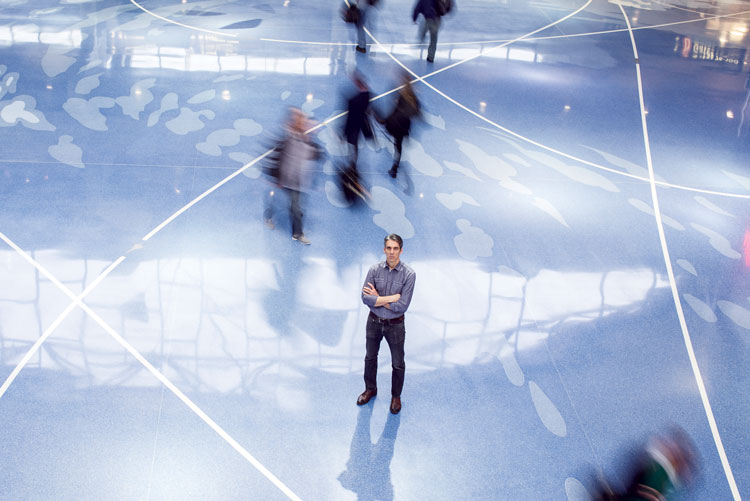 Ever since the Pittsburgh International Airport unveiled Clayton Merrell’s 69,000-square-foot work of public art last fall, travelers at the airport have been able to walk across the sky before they take off into it. When the Greater Pittsburgh Arts Council’s Office of Public Art reached out to Merrell for a proposal to rejuvenate the region’s primary airport, Merrell says he knew the airport’s dull, grey tiles presented the perfect opportunity.

“That atrium is a great space, but it had never really lived up to its potential,” says Merrell, a professor of art at Carnegie Mellon University.

The floor, titled “The Sky Beneath Our Feet,” is simple in concept: It shows a wide expanse of sky, pieces of the Pittsburgh skyline and the occasional airplane. To create the design, Merrell stitched together a digital collage using photographs taken by himself and others, eventually creating what would be translated into the piece of art that now spans the airport floor. The floor itself is made of terrazzo, a composite material composed of chips of marble, glass and other materials. From start to finish, taking out the old floor and putting in the new took about two years. 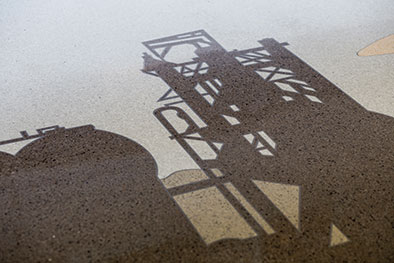 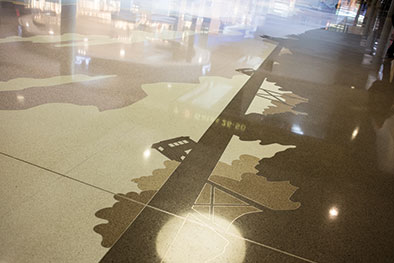 Merrell, who grew up in Murrysville, earned his undergraduate degree at Brigham Young University and his Master of Fine Arts degree from Yale University. After he graduated from Yale, Merrell lived in several states and Mexico before coming back to Pittsburgh 16 years ago to teach at CMU. This is his largest work; Merrell’s usual medium is paint, with which he creates large paintings that explore natural landscapes and how they are affected by human actions.

Merrell says he hopes his work will have a lasting impact on the airport, which long had been marked by the click-clack of feet on its tiles. “When I went into this project the thing that was most important to me, the measure of success I set for myself, was that it would change the feeling of being in the airport,” Merrell says. “It’s been really great for me that it seems to have done that, that it feels completely different out there, and I think people are connecting with the new feel the space has.” 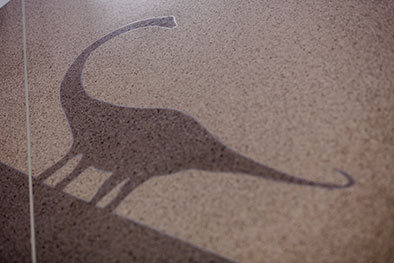 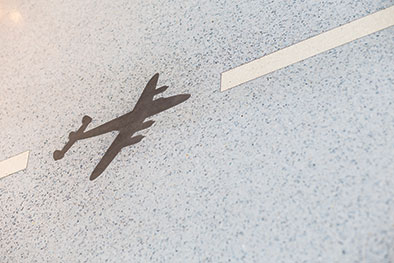 What was the process of designing the floor?  It was a lot of fun. They asked me for a preliminary design, and when I made the preliminary design they invited [him and other artists who had submitted designs] to come out and spend some time in the airport, just drawing and thinking. So I went out there into that big space, the big atrium space, and it immediately jumped to my mind, that image … After that, it was a lot of designing, because I started with a big digital collage with photos that I took or images that other people took that were all traced and digitally combined. From there, it was a process of infinite refinement, from photos to the kind of images that could be rendered in terrazzo.

There’s a skyline in the floor, a plane and a paper airplane. What made you decide to include images such as a paper airplane?  I needed something people could engage with at the micro level as they’re walking around, so I came up with this notion of these pathways that would connect different places in the airport itself and the architecture, and then pathways that would echo the ideas of travel, of going from one point to another. So those lines became a kind of visual element that was laid on top of the sky.

That still wasn’t quite enough, though, wasn’t interesting enough … I made a list of things that fly and started from there. There’s a paper airplane, a blimp, a helicopter, a bunch of other things. There’s the Wright Flyer, the first airplane. There are actually 12 of them, so there’s a lot to discover. If someone’s got some time and they’re stuck in the airport, it gives them something to do.

Would you do something on this scale again?  I actually think I probably will. If you had asked me a year ago, I would’ve said, ‘Not for a while; I’m not really interested in doing another one,’ because it was so time-consuming. But now that it’s been a little while and I can look back on it fondly a little bit, then I think, yeah, I will be looking for things like this again.

This article appears in the March 2016 issue of Pittsburgh Magazine.
Categories: Community Feature