You Should Know: Alan Jones

Alan Jones has dedicated the last 25 years to helping clients at the Pittsburgh AIDS Task Force. 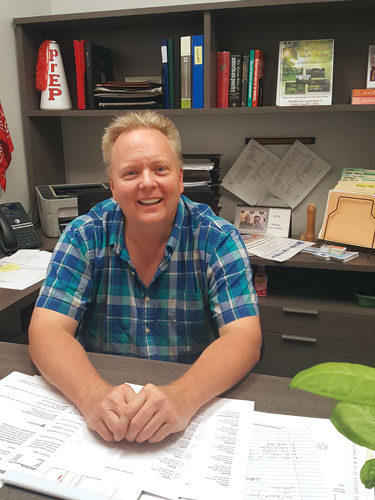 When reports of AIDS began filling news headlines in the early 1980s, Alan Jones told his friends he didn’t think it was anything to worry about. That began to change after an evening on a nightclub dance floor, where he was informed a neighbor had died after contracting the disease.

“I was like, ‘Oh my God.’ This wasn’t just something you were seeing on the news,” says Jones, 59. “Then one of my best friends from my college days had AIDS. It was a real thing that was happening.”

Jones — who had worked at state hospitals for 10 years — began volunteering in 1990 with the Pittsburgh AIDS Task Force in East Liberty. He worked with the speaker’s bureau to go into public settings to promote education about HIV and AIDS before being hired in 1991 as a caseworker. He now has been with the PATF, which offers free services and testing for certain STDs, for 25 years. This year, the nonprofit organization plans to open a clinic offering treatment for STDs.

Within weeks of joining the organization full time, Jones had a caseload of 102 clients.

“Usually a full caseload for a social worker is considered 25 to 40, tops. Not only did I have 102, but they all had AIDS — and on one level or another were all dying,” he says.

During the early days of Jones’ career, knowledge about HIV and AIDS was limited, and working around naivety and stigma made it challenging to link clients with services. Jones recalls stories of client’s families leaving paper bags with food on doorsteps and other clients being relegated to using separate bathrooms and plates. Some people with the disease were not accepted into nursing homes, and some who had died from the disease were turned away from funeral homes.

“People at that time were still very naive as to what causes HIV, how does it spread,” Jones says. “It’s interesting to me because up until I was 25, 26 years old, no one had even heard of HIV or AIDS. It would be like totally inventing a new disease today.”

Throughout the last 25 years, however, Jones has witnessed progress in terms of support, education and health care.

“It’s very different than it was 25 years ago. That makes me happier,” he says. “I will say my life has been empowered working here.”

What has been the most challenging part of working at the PATF?
One was stigma. I’ll just give an example: I was getting my car worked on, and I asked [the shop] to call me when they figured out how much it might be. When I went to pick up the car later, the guy said to me, “Where do you work?” because the receptionist had answered, “Pittsburgh AIDS Task Force.” You could tell that immediately made him uneasy, and he was only working on my car. I think the stigma is definitely the biggest, and sometimes lack of resources. In the early days, medicines were always very expensive. HIV meds could easily be $2,000 a month.

What has been the most rewarding aspect of your work?
I’ve learned that we all assume we’re going to live forever, and the truth is that life goes as quick as a flickering lamp. I say this to everybody, but I’ve got a real appreciation of life … One of my clients said to me once, “Alan, I’m going to be gone soon, but I’d like to think that you can live for me in some way.”

Do you have a client story that sticks out as the most memorable?
I remember a woman who had never accepted her son being gay … her son was dying of a disease she was ashamed of … Months later, after he died, she called me and thanked me for taking care of him. She said to me, “I learned a horrible lesson. I learned you should always love people for just who they are and be happy with just the way life is.” I could tell she had a lot of remorse.

What has changed for you over the years?
When I first started testing and I had to tell someone they were HIV-positive, it was horrible for me … Now I still feel horrible — and no one wants to hear those words — but I think of two things now. First, it’s good that [people know] because they can protect themselves from reinfection or from infecting other people. Most importantly, they can go into care and have a lifespan ahead of them.