The great Benstonium is at again with this set of faux book covers. 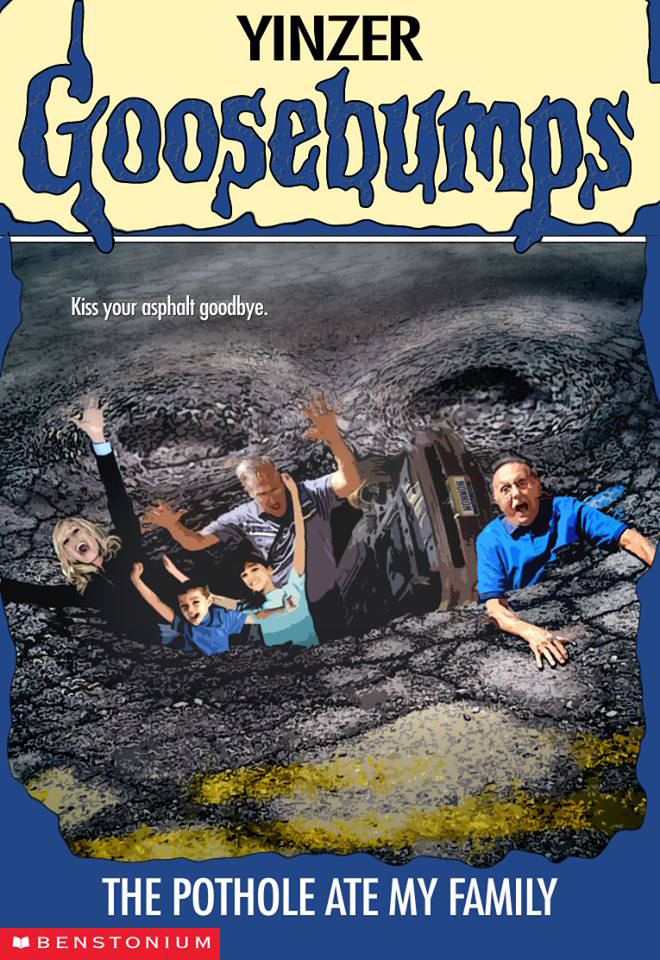 R.L. Stine’s “Goosebumps” books are the Pop Rocks of children’s fiction: Reading the books or eating the candy (can you really “eat” Pop Rocks? Maybe it’s more like surviving) result in short intervals of hold-your-breath expectancy punctuated by unbidden squealing. Whether out of delight or dismay always has been unclear. The great Benstonium.com, a website intent on “turning Pittsburgh upside-down,” has created a reason for Pittsburghers of all ages to revisit the iconic elementary school series with “Yinzer Goosebumps,” a set of covers parodying what would constitute horror fiction in the ’Burgh. Some of our favorites? Against an all-red background, some 11 roadway signs crowd beneath the title “Yinzer Goosebumps: There’s No Way Home!” with a safety-orange burst that reads “Spend hours navigating 483 different scary routes!” Another gem features a ramshackle Primanti Bros. with hollowed-out windows: “Yinzer Goosebumps: Primanti’s Is Closed.” But perhaps the best horror spin on Pittsburgh living is the cover that depicts what looks to be an asphalt black hole in which five people struggle for their lives. The title? “Yinzer Goosebumps: The Pothole Ate My Family.” Sometimes horror hits a little too close to home. Enjoy fall, yinz, because the return of the potholes is upon us . . .if it ever really left.

Few people in the United States might think of writing as a subversive or dangerous act, but in places such as Iran, China or El Salvador, it can lead to prison sentences. Tomorrow City of Asylum/Pittsburgh celebrates 10 years of providing exiled writers a safe place in which to continue their work with a reading from five such authors: Yaghoub Yadali, Israel Centeno, Khet Mar, Horacio Castellanos Moya and Huang Xiang. The reading will take place from 8-9:30 p.m. at the Alphabet City Tent on the North Side’s Sampsonia Way. The free event is open to the public, but you must reserve a spot.

#History: Walking tour of “Cement City” offers a look back into our industrial past

The growing popularity of cities is due in part to the desire to live closer to work and eliminate a lengthy commute. In the early 1900s, large industrial companies had an even better idea: build company housing near the factory. On Sunday, the Donora Historical Society will host a walking tour through “Cement City,” a National Historic District of 100 units built to house the growing population of mill workers.

In 1915, the American Steel and Wire Company anticipated an expansion of the steel mills in Donora and needed to build homes for an influx of more than 1,000 workers. Back then, creating housing close to work wasn’t a question of commute time, but of where to put all the new people. The solution? Concrete.

Oddly enough, this is where Thomas Edison comes in. Most famous for his light bulb, Edison also invented Portland cement, a strong and incredibly durable material that could be easily cast into wall panels. Donora’s “Cement City” homes all had storm and waste sewers, electric lights and were finished with yellow pine trim and stucco. To keep its workers happy, the company created and maintained gardens, tennis courts and playgrounds.