‘X’ Marks the Spot for This Wedding Scavenger Hunt

She thought she was going on a simple scavenger hunt. She never dreamed it would end with a wedding.

When David Dampier and Jami Marken finally got together, they knew their relationship would end in marriage. But it was David who figured out just how to make that moment right for the two of them.

The couple met while studying at Edinboro University of Pennsylvania but life took them separate ways. They remained friends, though, and when David moved to Pittsburgh to be closer to his daughter, Jami decided to move to Pittsburgh too in order to give the relationship with David a fair shot.

“Us moving to Pittsburgh and starting a new life together was us starting over, us starting fresh with a clean slate and finally getting to be in a relationship that we hadn’t had the opportunity for before,” David says. 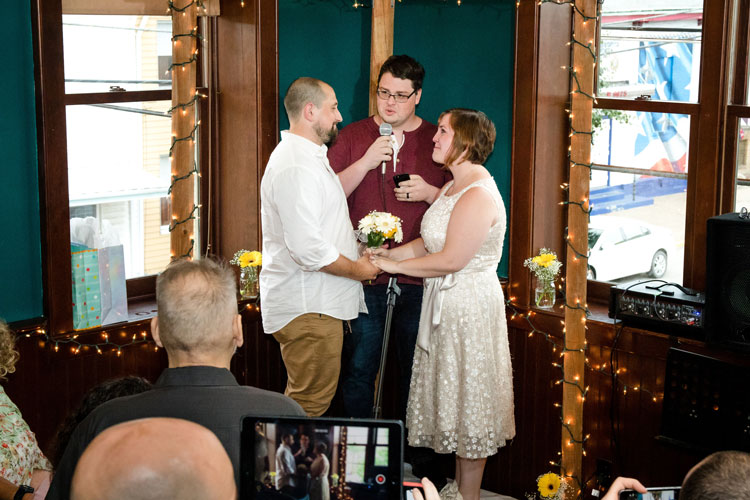 They spent the year nurturing the relationship, but it was easy for them because they were on the same page: They both knew they wanted to get married and build their families, so there was never any wondering or confusion. But the flipside to that was that a proposal wouldn’t be a surprise.

“I didn’t want this to be like, ‘Oh OK, we know we want to, so let’s just get it over with.’ It wasn’t that,” David says. “I wanted to give her some sense of magic … I wanted the opportunity to try to surprise her.”

So he started brainstorming ways that he could give Jami a day of enchantment that she would never see coming, and he landed on a plan that some people have said raised expectations for other grooms-to-be.

He was going to give Jami a surprise wedding. 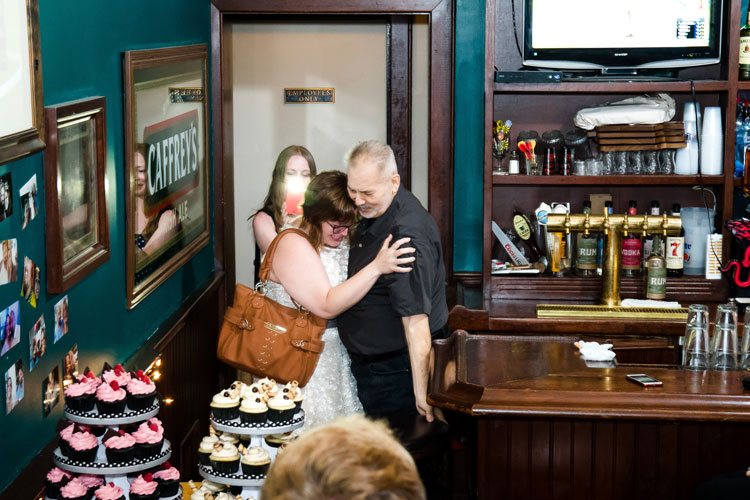 David ran the idea by Jami’s mom, Vivian Marken, and Jamie’s best friend, Barbi Urban. They didn’t need any convincing, though, because the whole idea of a surprise wedding made sense for what the couple wanted.

As David and Jami had already built a life together, he had to be cautious of his arrangements. This meant he couldn’t spend so much money that Jami would notice and he had to make sure everyone knew to keep it a secret from Jami.

Vivian and Barbi took care of the invitations and getting people there, while the decorations, details and day-of distractions were left up to David. After searching for a venue, the couple’s friends helped them secure the upstairs room at Smokin’ Joe’s Saloon in South Side. They would have food, a private room and space to dance — exactly what they needed.

With the location decided, they set the date for August. But when Jami’s dad had a health scare in April, they all realized they need to make some changes to the wedding arrangements.

“It would mean so much to her if he could be there,” David says. “If we had this thing and it was too late, it wouldn’t be the same. So, we pretty much pushed this up to planning it in four weeks and putting it all together. We were basing it all around the fact that, no matter what, no matter who else couldn’t be there, her dad had to be there.”

With the date now set for June, David had to pull all of the various details together and make the wedding happen. He also had to make sure that his bride would be able to make it down the aisle.

“He even emailed my boss, so all of my coworkers knew what was going on,” Jami says. 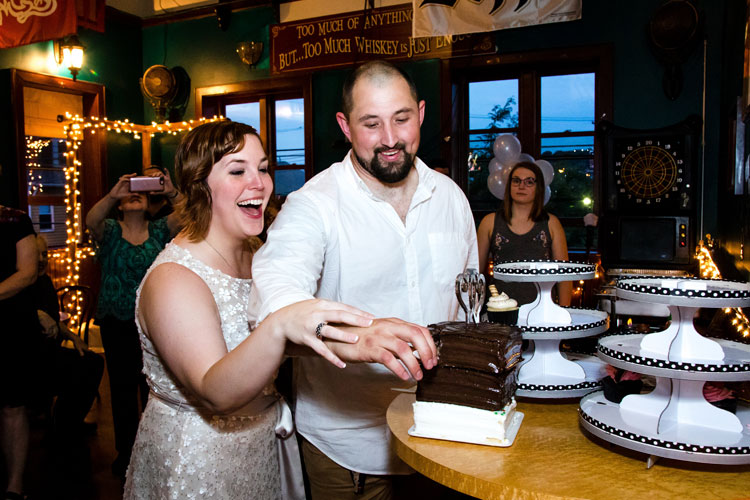 She was still in the dark about the entire thing, and David wanted to keep it that way. He knew this meant he would have to come up with an elaborate ruse to distract her while he was busy setting up the venue and getting all of the guests situated.

His plan for Jami had two parts. On Friday, the night before the wedding, he would set out a book of puzzles for Jami and two of her friends. They needed to solve all of the puzzles in order to complete the second part, which was a Pittsburgh scavenger hunt involving QR codes and clues from an app.

David, a programmer, knew this would be the perfect way to get Jami engaged because these were activities they loved doing together. He wanted the puzzles to be challenging, but not impossible — but Jami was worried about completing them.

“I was freaking out in general because one of my fears was that the puzzles would be too hard, and I would not know where to go or be able to find him,” she says.

Everything worked out, though, and by the end of the hunt, Jami had found the three packages David left for her. The first was her dress — to be picked up under the name “Jami Dampier” as a hint for her name change; the second was a pair of Chuck Taylors; and the last item was a box filled with miscellaneous tools and taped shut to conceal it was carrying the rings. Jami and Barbi got dressed and ready for the surprise that night, but she still wasn’t sure what was happening.

“I didn’t want to say out loud, or even allow my brain to think it, ‘I hope this ends in a wedding,’” Jami says. “I thought, ‘What if I say that, and I’m hoping for that, and then it’s an engagement?’ How could I, after all of this stuff, be disappointed in the end result? I just wanted to be happy with whatever happened.”

The moment she walked into the upstairs room at Smokin’ Joes, everything cleared up. Waiting by the door, her dad. Filling the room, friends she hadn’t seen in years. Standing at the altar, the man who put it all together. 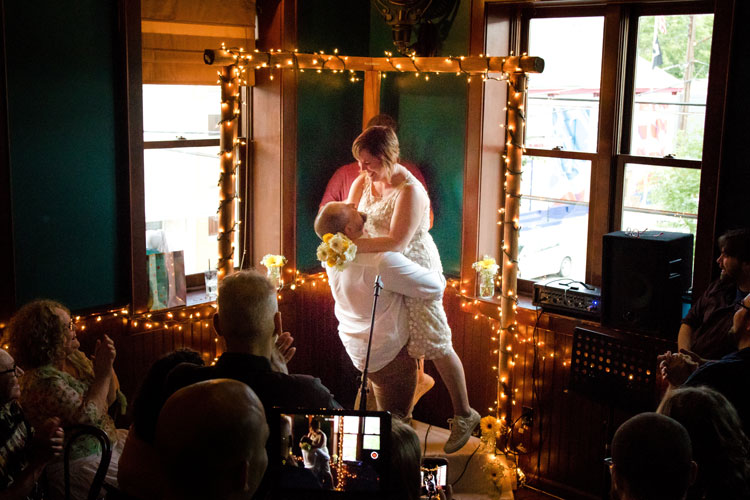 “Whenever we had talked about getting married, we had thought it would be just us, or just us and our parents maybe. So, to have the opportunity to celebrate with friends of mine that I haven’t seen for years, having my mom and dad there, it just meant everything to me,” Jami says. “I didn’t think that was important to me, having friends there and making it a big deal, but it was just so unexpected and awesome. To [have them] come all the way out to Pittsburgh for us, it was just so nice. I never thought I would get to have that.”

It wasn’t conventional, but David wanted to give her a wedding that would make her feel as special as he thinks she is.