The couple will personally fund the charity, named in honor of Pittsburgh native Connor Michalek, through the Children’s Hospital of Pittsburgh Foundation. 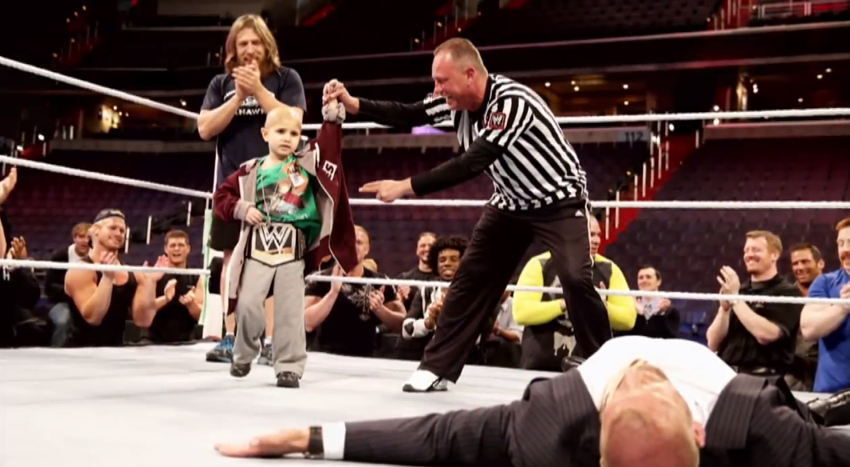 In the wrestling business, heroes never seem to age. We forever remember them as they were in their prime — Hulk Hogan in his yellow tights, Ric Flair in his gator-skin loafers, Jimmy Snuka soaring through the air like a flying squirrel.

Connor Michalek will be remembered forever, too. The 8-year-old Hampton Township native passed away earlier this year from pediatric brain cancer. But more than a cancer patient, he was a wrestling fan. A huge wrestling fan. Thanks to a groundswell of social media support that started in Pittsburgh and spread around the world, the WWE heard about Connor’s heroic fight in 2012 and invited him backstage at Consol Energy Center to meet his favorite wrestler, the underdog Daniel Bryan.

Not content with a mere autograph, Connor showed off his moves backstage, making Bryan tap out with a supremely well-executed submission hold. The WWE stars were the ones who seemed starstruck.

When Connor’s health began to decline earlier this year, the WWE flew him to Wrestlemania 30 in New Orleans, where his hero won the heavyweight championship in the main event. Upon hoisting the belt, Bryan rolled out of the ring and hugged Connor, who was sitting in the front row.

“Connor, you gave me a lot of strength and helped me earn this,” Bryan told him. “Please keep on fighting.”

Today, WWE executives Stephanie McMahon and Paul “Triple H” Levesque announced the formation of “Connor’s Cure,” a charity that they have funded personally through the Children’s Hospital of Pittsburgh Foundation.

Donations will provide funds for pediatric brain and spinal cancer research, as well as medical care for children and their families. You can make a donation here.

When Connor was diagnosed with cancer at age 4, his parents were told he had one year to live. He battled for four long years. Pittsburgh always will remember him as he smiled in the best moment of his life, confetti raining from the sky at Wrestlemania, a hero to his heroes.