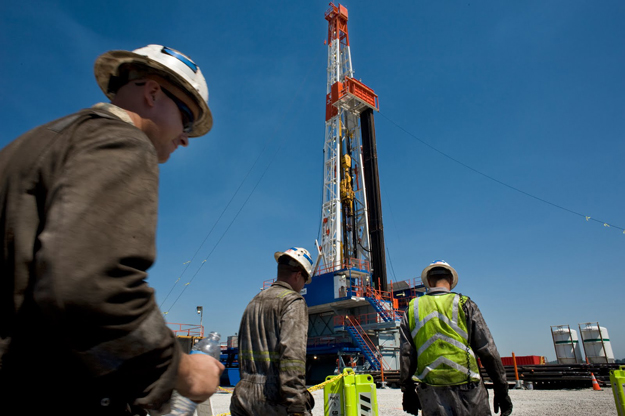 WVU Researcher Designs Monitoring System for Marcellus Wells
Marcellus Shale is one of the largest natural gas formations in the world, capable of supplying the entire country with natural gas for two years. While Pennsylvania has greatest access to the natural gas field, retrieving is not an easy task. The terrain of drilling sites often makes work difficult, and lack of power and phone lines makes it impossible to monitor them with traditional systems. For West Virginia University researcher Dr. Michael McCawley, however, accessing remote gas wells is as easy as checking his computer screen.

In Washington County, where a Marcellus well is about to be drilled, McCawley has already placed three monitoring modules. Thanks to solar power and cellphones, he will be able to use those modules to monitor light, sound, dust and volatile organic compounds given off at the site. “The system is designed to be cheap, portable, off-the-shelf and easy to use in a wide variety of situations. Plug and play,” McCawley explains. Most importantly, because the monitors are independent of power and phone lines, they can be placed between sources of possible pollution and the sites, like schools and hospitals, that could be affected by them.

The project is part of a larger effort at the U.S. Department of Energy’s National Energy Technology Laboratory, which has partnered with five regional universities (including WVU, Pitt and Carnegie Mellon) to fund this kind of research. Ensuring that the development of energy is environmentally sustainable is also one of the major activities of WVU’s Advanced Energy Initiative.
—Lauren Schmeer, PM Editorial Intern

CMU, Penn Engineering Awarded Large Grant for Transportation Research
We’ve all been there: You’re driving down the Parkway and spot someone going 20 miles over the speed limit while texting, drinking coffee and trying to dig something out of the glove box. Moments like that remind us how even something as mundane as our morning commute can be dangerous. Now, thanks to a Department of Transportation grant, Carnegie Mellon University researchers are working to make the road a little safer for everyone.

CMU, in partnership with Penn Engineering, has been awarded a $3.5 million grant to develop innovative traffic and transportation safety systems. The money will be used by the new University Transportation Center (UTC), a joint venture between CMU and Penn.

The center will conduct research on aspects of transportation, ranging from driver safety to traffic flow. Data gathered from these undertakings will be combined with cutting-edge communication and computing technology to produce smarter, safer and, possibly, self-driving vehicles. UTC will also partner with Traffic 21, a multidisciplinary research team that's working to formulate economic and safety transportation advancements.
—Rob McCoy, PM Assistant Editor

Seton Hill to Host Women's Entrepreneurial Symposium
Pittsburgh is home to corporations like American Eagle and U.S. Steel. With such a high degree of corporate presence, it's easy to sometimes overlook local businesses and entrepreneurs. Seton Hill’s E-Magnify, however, is looking to combat the oversight, particularly as it applies to women.

E-Magnify, which seeks to promote women and business ownership, will host "Building Strategies for Growth" on March 9 at the campus performing arts center.

The symposium will include a panel discussion, networking opportunities and a keynote address by Mary Cantando, an accomplished author, speaker and consultant.

This article appears in the February 2012 issue of Great Minds.
Categories: Great Minds