Plus, an award-winning writer talks crime and prison at Chatham and an evolutionary mural goes on display. 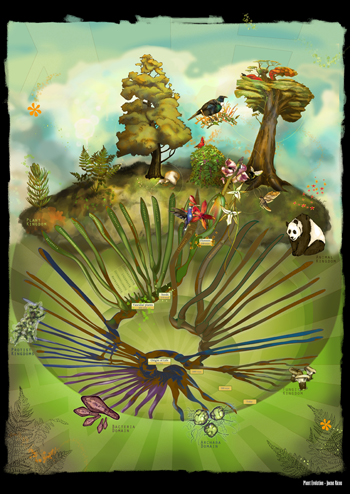 Duquesne University professor teams with artist to create the "Spiral of Life"
“Spiral of Life,” a mural conceived by Dr. John A. Pollock, Duquesne associate professor of biological sciences, and created by artist Joana Ricou. The work, conceived in 2009 as part of Dr. Pollock’s Darwin Celebration, placed sixth overall among entries in the International Science & Engineering Visualization Challenge, a competition co-sponsored by Science magazine and the National Science Foundation.

Reproductions of the work, which Duquesne called “a new symbol for the evolution of life,” are currently on display in some likely locations around town: the Pittsburgh Zoo & PPG Aquarium, the National Aviary and the Carnegie Science Center. Dr. Pollock’s efforts were supported by a Science Education Partnership Award and a Darwin Evolution/Revolution Award from the National Institutes of Health’s National Center for Research Resources, as well as by Duquesne’s Bayer School.

English, Political Science, Organic Chemistry … and Pasta
Is your spring semester lacking a certain flavor? Looking to spice up those hours between your 8 a.m. statistics lecture and that four-hour evening chem lab? West Virginia University is happy to add a little Mediterranean grub to your course load. This fall, the school will introduce a three-credit course it's calling “Mediterranean Food, Culture and Health.” An on-campus component will explore the dietary differences, cultural distinctions and cooking habits of Mediterranean life and cuisine. And if, naturally, your mouth starts to water talking about all those Italian meals, you’ll get a perfect chance to sample the fare at the end of the semester: The course concludes with a 10-day trip to Florence. The class is more than just an excuse to chow down, however.

“Last year, in the newly released 2010 Dietary Guidelines for Americans by the USDA, the Mediterranean diet composition and health impact was referenced in many of the goals set for Americans,” says Melissa Olfert, director of the school’s Graduate Dietetic Internship program and architect of the course. So, Mountaineers, devoting a part of next semester to cravings for Mediterranean delicacies could actually make you healthier! Apply early, though; sadly, there are only 15 seats available for this delicious class.

Award-Winning Writer Talks Crime and Prison at Chatham
As a bright 16-year-old, R. Dwayne Betts found himself on the wrong side of the law. Because of harsh sentencing guidelines in his native Virginia, he spent the next nine years of his life—formative years, until he was in his mid-20s—in some of the harshest prisons in the state. Now, the award-winning author is a tireless advocate for judicial reform and youth justice, and he shares his story and insights with audiences all over the country.

On an upcoming visit to Chatham University, Betts will read from his memoir A Question of Freedom: A Memoir of Learning, Survival, and Coming of Age in Prison, as well as his poetry collection, Shahid Reads His Own Palm. Betts comes to Chatham as part of the Words Without Walls Black Writers Reading Series, a program that will bring five black writers to Chatham for a public reading as well as an appearance in the Allegheny County Jail for inmates enrolled in Chatham’s creative writing program at that facility.

Betts’ free public reading and signing will take place at 8 p.m. on Friday, Dec. 2 in the Welker Room of the James Laughlin Music Hall, on Chatham’s Shadyside Campus. The event is free.

This article appears in the November 2011 issue of Great Minds.
Categories: Great Minds