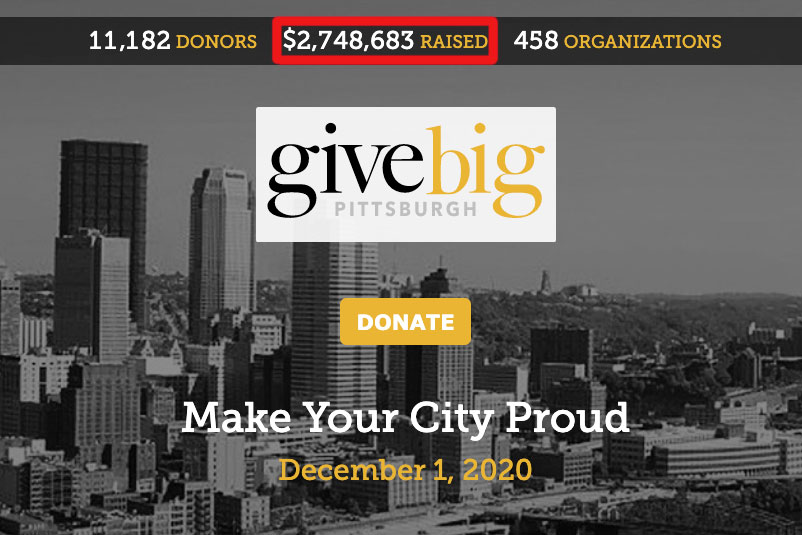 Pittsburghers were certainly in the mood to give on Giving Tuesday, a nationally recognized response to the holiday spending done on Black Friday and Cyber Monday. As of midday Wednesday, Dec. 2, more than $2.7 million had been donated to 458 Pittsburgh-area nonprofits through the Give Big Pittsburgh online portal.

This is the fourth year that Pittsburgh Magazine has partnered with GiveGab to raise money for these organizations and it’s a record-breaker. In 2019, nearly $1.6 million was raised on the first day, this year that total was topped by another $1.1 million.

“When we started Give Big Pittsburgh four years ago, our goal was simply to create a platform that would help nonprofits raise money and prove that Pittsburgh was the country’s most generous city,” says Pittsburgh Magazine Publisher and Vice President Betsy Benson. “Each year, an increasing number of nonprofits and donors participate in Give Big Pittsburgh, making it Pittsburgh’s single most successful giving event.

“Our nonprofits face a crisis the likes of which they have never seen before. And so our community has responded in a way we haven’t seen in the four years of Give Big Pittsburgh. If we needed more evidence that Pittsburgh takes care of its own with a remarkable philanthropic spirit, look no further than yesterday’s $2.7 million in gifts.”

Nearly 500 Pittsburgh-area nonprofits are registered to receive donations. If you missed out on Giving Tuesday, no worries, the Give Big Pittsburgh website will be open until the end of the year to accept donations. You can also track which charities have raised the most money and which have the most donors.

Here are the top 10 both categories as of midday Wednesday.