Pittsburgh Steeler LaMarr Woodley demonstrates humility and class, both on the field and off. 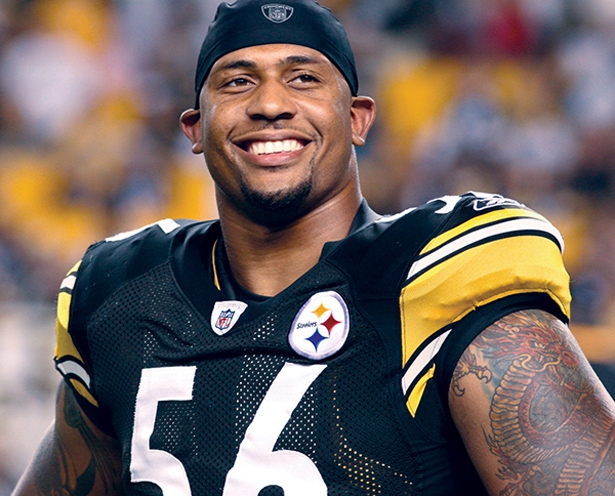 It was midnight, and LaMarr Woodley was preparing for the graveyard shift. Just hours after the Pittsburgh Steelers had suffered a demoralizing, late-November overtime loss to the lowly Kansas City Chiefs, the team plane touched down at Pittsburgh International Airport.

All the players were stunned, shoe-gazing and more than ready to go home and sleep off the gut-punching loss. Everyone except for Woodley, the team’s 25-year-old star linebacker.

Wasting no time, Woodley tossed his suitcase into his SUV and tore up I-80 heading north. He drove for hours, winding around the cusp of Lake Erie until the black horizon turned purple. Finally, at the break of dawn, he reached the blighted manufacturing city of Saginaw, Mich., his hometown.

People were already lining up on the windswept front lawn of the Civitan Rec Center—the free gym where Woodley spent most of his childhood. Their faces lit up when they saw their hero, who was carrying bags of household items for the approaching Thanksgiving holiday. For three hours, Woodley and other volunteers gave out napkins, plates, forks, dish detergent and other essential items to more than 500 families.

“Win or lose, it’s important to put the game aside,” Woodley explains. “I made a commitment to the community that I would be there, so I had to fulfill that promise.”

Twenty-four hours later, he was back in Pittsburgh handing out frozen turkeys at a recreation center in Hazelwood.

On the field, Woodley’s strongest asset is what pundits like to call his “motor.” Or, in non-gridiron speak, his heart. A first-time Pro Bowler in 2009, Woodley racked up 25 sacks in the past two seasons. Only four NFL players have more in that span. Yet the second-round draft pick from the University of Michigan makes less money than the backup goaltender of the Pittsburgh Penguins.

Currently in the final year of his rookie contract, worth $550K this season, Woodley had every right to join in on the NFL’s hottest summer trend—holding out of training camp for a raise. The Tennessee Titans’ stud running back Chris Johnson did it. Even $100 million man Albert Haynesworth was a no-show at the Washington Redskins’ mini-camp because of hurt feelings over trade rumors.

But when the Steelers opened the doors of their South Side training facility for optional team workouts in May, there was Woodley, crushing tackling dummies in the pouring rain when he could have been at home relaxing on a “Dora the Explorer” marathon with his 2-year-old daughter, Gabrielle.

“If I miss workouts and training camp, I not only hurt myself, but I hurt the team,” he says. “I don’t want to fall behind because I’m worried about dollar signs.”

At times, Woodley’s immense strength and anticipation on the field make him look like a man among boys. The same could be said about his humility and class in a league that has been sullied by tawdry Tweets, lavatorial lasciviousness and camera-phone preening. But at the Boys & Girls Club in Wilkinsburg, where Woodley also volunteers, he’s just one of the kids.

“I was there when LaMarr first showed up at the club, and it was like magic,” says Mike Hepler, president and CEO of the Boys & Girls Club of Western Pennsylvania. “He spent at least four hours playing ping-pong, basketball and pool with the kids. Later that day, I went downstairs where everyone was having snacks, and there was LaMarr eating a big bowl of tuna fish like all the other kids.”

But that’s not Hepler’s favorite Woodley story. When Woodley first arrived at the club, he was submerged in a sea of excited kids who were far from awe-struck, Hepler recalls. A little girl came running up to the 265-pound linebacker with her hand raised to the sky. “Mister LaMarr,” she said, “do you have a girlfriend?” Woodley disarmed her with his warm smile, but then it was the boys’ turn to grill him. “Mister LaMarr,” one kid piped up, “how much money do you make?”

Woodley thought about it for a few seconds, then said, “Enough.”

What a refreshing answer.

If there is one man who deserves mega-money from the Steelers, it’s Woodley. After all, he has a knack for paying it back in spades.