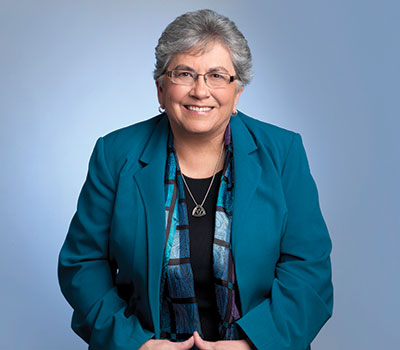 Sister Candace Introcaso thinks of herself as being in the family business. Nearly 40 years ago, she joined the Sisters of Divine Providence, the order that in 1963 founded La Roche College, a private, Catholic college that named Introcaso its seventh president in 2004.

At the time of her appointment, Sister Introcaso was already decades deep into her higher education career. In the late 1980s, she worked at La Roche in grant work and student affairs before leaving to serve two other universities – Heritage College on the Yakama Indian reservation in Toppenish, Wash., as an assistant vice president, and Barry University in Miami, Fla, as vice president. Her next and final stop was La Roche College.

“I get to tell the story of the college and hope that people will find great interest and share our passion in this little gem that we have out in the North Hills,” says Sister Introcaso, who earned her Ph.D. in higher education administration from Claremont Graduate University in California.

Since joining the college 12 years ago, Sister Introcaso solved “significant” financial challenges and helped create “a facility that matches the quality of the programs, faculty and students.” Sister Introcaso also supported the college’s decision to sell 37 acres of underutilized property to a developer. The retail shops and restaurants that have opened there have enhanced campus life, she believes.

Under Sister Introcaso’s leadership, La Roche has doubled the number of graduate programs in the past decade; is launching its first doctoral program in nurse anesthesia practice; is enjoying its new athletic complex; and is planning a major renovation to its science building.

This article appears in the February 2016 issue of Pittsburgh Magazine.
Categories: Women & Business