Why universities + corporate partnerships = jobs in our region. 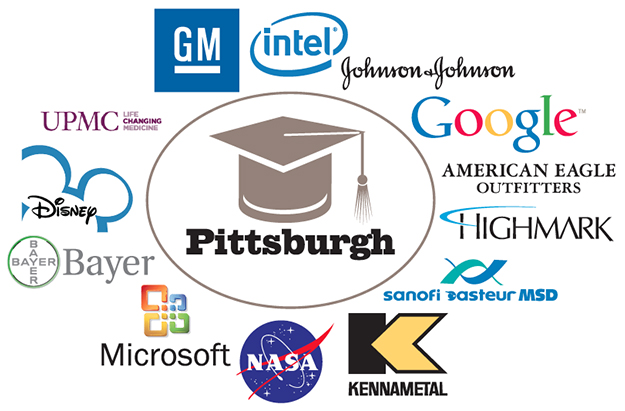 “Pittsburgh is a research powerhouse, with more than $1 billion in funding, mostly from the U.S. government,” Carnegie Mellon University president Jared Cohon observed a short time ago. “And recently, we’ve turned our attention to turning research into job creation. We have a vibrant technology sector with hundreds of companies, some very small. The pace at which we are spinning off companies continues to grow.”

A glance around the city’s East End confirms that federal agencies are lining up to work with local universities. The National Robotics Engineering Center, a unit of CMU’s Robotics Institute, is one of the world’s largest R&D operations in the field. CMU’s Software Engineering Institute is a world leader — and its Entertainment Technology Center is creating the techniques and talent for the region’s gaming and film industries. The McGowan Institute for Regenerative Medicine, a joint project of Pitt and the University of Pittsburgh Medical Center, investigates therapies and materials with major promise in the health care industry worldwide. In State College, Penn State is helping NASA share its vast data trove with the nation’s teachers. In 2011, the program reached over 100,000 students and teachers in STEM disciplines (science, technology, engineering and math).

Now, the world’s largest corporations are following the fed’s lead, joining forces with academics to develop new products and solutions.

Pharmaceutical giant Johnson & Johnson recently announced collaboration with UPMC and the University of Pittsburgh’s Drug Discovery Institute. “I think J&J was surprised to see the depth and breadth [of research activity] at Pitt,” says Institute director Lansing Taylor. “Now that we have rocketed up to No. 6 in funding from the National Institutes of Health, we’ve become a powerhouse.” In July, Pitt announced another high-profile affiliation with Sanofi Pasteur to develop a vaccine strategy that protects against all strains of seasonal influenza, avoiding the need for annual vaccinations.

While Pitt attracts corporate partners in the health sciences, there’s a different group of high-profile logos next door. Among Carnegie Mellon’s long-standing affiliations is a 12-year effort with General Motors. Since 2000, the world’s largest automaker has contributed more than $10 million to establish two Collaborative Research Labs (CRLs) at the university: the Information Technologies CRL and the Autonomous Driving CRL. One result from the CMU/GM team: an experimental vehicle for a driverless car.

CMU’s world-class reputation in computer science, information technologies and software development has drawn global leaders to take up residence. Microprocessing giant Intel arrived in 2001 and now has eight full-time employees working on campus. In 2007, Microsoft made the same commitment, sponsoring CMU’s Center for Computational Thinking. And five years before Google Pittsburgh moved to its own East End location in 2010, it landed a group of top-flight researchers on the CMU campus to work with researchers and students.

The establishment of the Entertainment Technology Center in 1998 made sense for CMU, merging the talents of arts and computer scientists. Now, media companies are experimenting with robotics, human-computer interaction (HCI), speech understanding, computer vision and machine learning. Since 2008, the Disney Research Lab at CMU has turned the signature brand fantasies into reality.

Fourteen Duquesne University students now participate in the Bayer Scholars Program, developed to enhance diversity in the academic setting and scientific workforce. Funded by an eight-year grant from the Bayer USA Foundation, headquartered in Robinson Township, it targets women and minority students, and accepts academically talented and motivated freshman chemistry or environmental chemical science majors. Financial aid, mentoring, and research and internship experiences are a part of the program.

Other regional corporations have significant presences on-campus: Highmark has confirmed a partnership with Grove City College’s Center for Entrepreneurship & Innovation that will provide an independent seminar course for Grove City College students this coming academic year. At Allegheny College, a partnership is in the works with UPMC. Saint Vincent College and Kennametal Inc. have cooperated in the Kennametal Center for Operational Excellence since 2004 within the Alex G. McKenna School of Business, Economics and Government.

This article appears in the September 2012 issue of Pittsburgh Magazine.
Categories: Community Feature