Win Tickets to Mingle With Young Professionals at Mix at Six

Plus, the Three Rivers Film Fest kicks off and Pitt's Music on the Edge expands your sonic horizons. 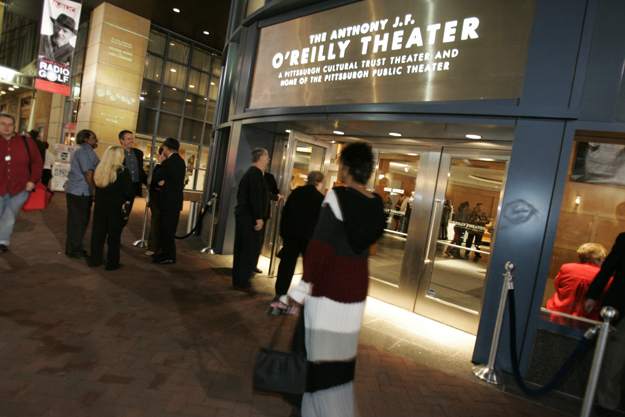 Win Tickets to Mingle at Pittsburgh Public Theater
The fine folks at Pittsburgh Public Theater just want you to have a good time. Grab a few drinks, make some new friends, see a show. That’s why they put together a regular party called Mix at Six, designed for young professionals looking for an easy weeknight out. Show up two hours before curtain—this month, the show is the drama Red, a 2010 Tony Award winner for best play —and head up to the rehearsal hall for free food and drinks from Starbucks, Aramark, Miller Beer and more. One low price gets you into the gathering and the play. And if you need extra incentive, we’re giving away three pairs of tickets to this month’s Mix at Six! Check out to this week's edition of After Dark to enter!

Music on the Edge Expands Your Sonic Horizons
Pitt’s Music on the Edge concert series is an invaluable (and under-appreciated) resource for ‘Burghers looking to broaden their exposure to avant-garde music. Dealing with what’s called “contemporary music”—think the classical music of the past hundred years or so—the series explores sonic territory unfamiliar to most, but revered by those in the know. It’s tough to describe, but to attend one of their concerts feels like a revelation. It’s as if you’ve only been watching network TV for your whole life and then suddenly realize you’ve had HBO all along.

Bad metaphors aside, this weekend marks one of their tentpole events in the 2011-2012 season. A two-night festival and symposium will explore the works of Morton Feldman, one of the most iconic American composers of the 20th century (if you’re at all familiar with John Cage or Philip Glass, you’re thinking along the right track). Collaborators and students of Feldman’s will perform two of his signature works; poetry readings will proceed the performances. Get to the Wood Street Galleries tonight or tomorrow if you can; if not, check out Music on the Edge’s full schedule and grab some tickets now.

Three Rivers Film Fest Kicks Off
The only problem with the Three Rivers Film Fest, the annual celebration of all things cinema from Pittsburgh Filmmakers, is quantity (and certainly not quality). There are simply so many excellent options to choose from that you’ll inevitably feel like you could’ve done more. Fortunately, After Dark has been granted some sneak previews and is ready to help you plan your movie-going—including a pick for the always-packed opening night of the festival. Get a full preview and reviews in this week’s After Dark!

In Theaters This Weekend: New films coming to Pittsburgh this weekend include: the big-cast crime caper Tower Heist, with Ben Stiller, Eddie Murphy and dozens of others; an admittedly brilliant marketing maneuver called A Very Harold and Kumar 3D Christmas; and the Elizabethan mystery The New York Times is calling “a brutal insult to the human imagination,” Anonymous. PM Film Editor Sean Collier will be on the 102.5 WDVE Morning Show at 7:15 a.m. tomorrow to review Tower Heist and Anonymous. He’s enough of a Shakespeare buff to know what’s going on in Anonymous but lowbrow enough to be open to Tower Heist. Tune in tomorrow morning to hear how that works out for him!

Garbage Bag Gala: Ladies and gentlemen, now is your chance to show off all the latest fashions in your favorite … garbage bag? The 2011 Garbage Gala will be held at the Fox Chapel Racquet Club Saturday night, so come support this wonderful charity, benefiting The Salvation Army's Family Care Center in East Liberty. READ MORE.

Calliope Acoustic Master Series Presents The Refugees: Tired of listening to the same songs on the radio? Go see The Refugees Saturday at the Carnegie Lecture Hall. With their unique sound that mixes country, rock, folk and Americana, this concert is sure to be an experience unlike any you've ever had. READ MORE.

This article appears in the November 2011 issue of PMWeekend.
Categories: Things To Do