Wigle Whiskey Brings a Still to the Strip

Capitalizing on a 250-year-old local tradition, Wigle Whiskey opens a magnificent brewery in the Strip. 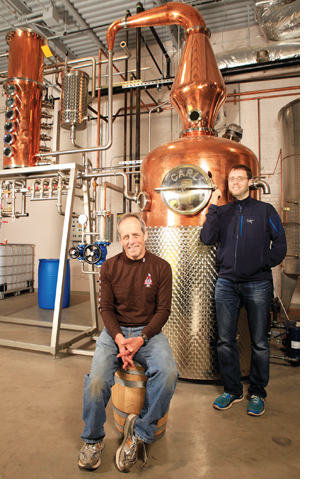 The Wigle Whiskey story is a bit complicated. It starts with a tax dispute in the 1790s, diverts through a brewery in Kyrgyzstan and climaxes with the drinking of a pear brandy in Oregon. Somehow, that adds up to Pittsburgh’s brand-new (and only) distillery, a gleaming workshop and soon-to-be museum in the Strip District.

So, complicated. If you’ve met owner and “Wigle-in-Chief” Eric Meyer, though, it all starts to make sense.

Meyer, a Hampton Township native who now resides in the Strip, found himself in Osh, Kyrgyzstan, on a Peace Corps assignment after graduating from the University of Vermont. As an added source of income, Meyer worked at Osh’s Pivnaya Akademiya Brewery; that gig sparked an interest in brewing, which became focused when he sipped a revelatory brandy from Oregon’s Brandy Peak Distillery.

“It totally altered the way I viewed distilled spirits,” Meyer says. “It didn’t taste like any liquor I’d ever had before. They were dedicated to making a good product that could be appreciated.”

Meyer had a lifelong interest in his hometown’s history, and with the events of the Whiskey Rebellion (and its fiery rabble-rouser, company namesake Philip Wigle) in mind, he decided to return home and bring spirits to Pittsburgh. Along with his father, Wigle master distiller Mark Meyer, Eric spent the better part of 18 months preparing to launch his brand.

The main event at Wigle’s gleaming brewery is part tour and part tasting. Small groups are handed a cocktail and led through the distillery, receiving a lesson in whiskey-making (and the history of the Rebellion) at each stop. Much of the manufacturing process will be familiar to anyone who has toured a brewery; it’s only in the final stages that whiskey is born.

“We want people to walk out of here being nice whiskey snobs,” he says.

Upon opening, Wigle Whiskey will sell rye and wheat whiskeys in their white varieties. White whiskeys are not stored in wood and do not age; this gives them a more subtle taste and makes them better for mixing. Wigle will eventually offer dark whiskeys—but they need to spend a few years in barrels first. The lag time will give Meyer a chance to increase appreciation of white varieties.

Tours are available for $20, with a maximum of eight guests per tour. As for the future of Wigle Whiskey, it seems that Meyer’s highest ambition is to be a local institution.

“Most of the business will be centered here,” he says. “I moved back home to do this, so I don’t want to spend a lot of time [elsewhere]. We have the opportunity to create something here.”