Why You Should Know: William Phoennik

The WWII veteran has donated his memorabilia, including a wide collection of hand-drawn envelopes from his war correspondence, to Soldiers and Sailors Memorial Hall & Museum. 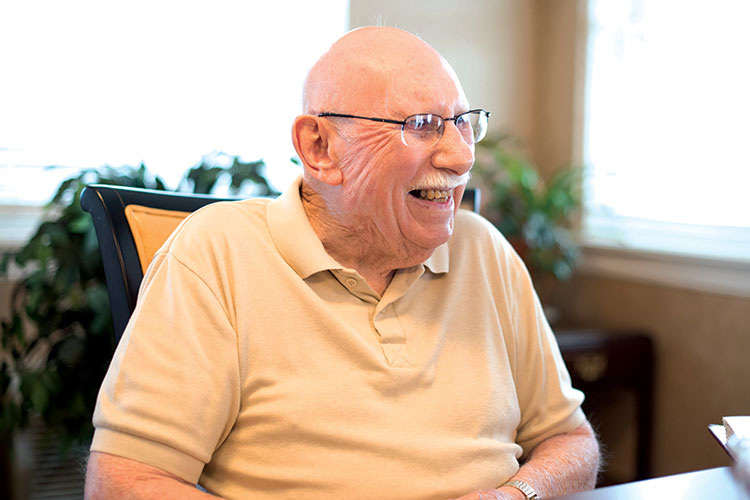 As a technician serving in World War II, William “Bill” Phoennik saw many of the hardships of war first-hand.

Through it all, the now 94-year-old kept his spirits up and used his drawing skills to pen clever sketches on the envelopes of letters he sent home to his family in Sheraden.

“I wanted to show the goofy things soldiers were doing,” he says.

“I think that was his way of dealing with it; it was therapeutic,” says his son, John.

Those drawings, along with maps, copies of his photographs, a century-old camera and his wartime diary, now are housed in the collection at Soldiers & Sailors Memorial Hall & Museum in Oakland, where they can be admired by generations to come as Phoennik’s greatest generation dwindles in population.

“I think Bill was at the point where he was ready to have his story told, and that’s what we’re about here,” says Soldiers & Sailors Curator/Historian Mike Kraus. “Bill’s story is worthy of telling.”

Most of the drawings on the envelopes — some of which are exhibited in the museum’s “Thinking of You” section, which illustrates how soldiers throughout U.S. history communicated with those at home — were done in fountain ink and colored pencil. One depicts a soldier pointing binoculars at a girl in a pink bathing suit. “Objective sighted,” reads the caption. Others show soldiers playing pranks on their higher-ups.

“As a curator, I was really impressed with his detail,” Kraus says. “I can look at this gun in this picture and know exactly what kind of rifle this is.”

Many of the images depict tanks or other machinery. At age 20, Phoennik recently had finished a machinist course and was working as a cutter at Second Avenue Strip Mill in Hazelwood when he decided to enlist. After training, Phoennik was sent to France and arrived on the beach in Normandy a month after D-Day, where he and his comrades were charged with moving and repairing damaged or destroyed machinery. He finished the war with rank of a T/4 (Technician 4th Grade), the equivalent of a sergeant.

Phoennik’s diary is more of a scrapbook, containing a newspaper clipping of an article written by famed war journalist Ernie Pyle and a German propaganda flier in addition to Phoennik’s notes — thoughts he recorded during his basic training. The camera he donated was given to him by his father, who used it in WWI before passing it on to his son to use in WWII.

The final piece of history he contributed was a 28-foot-long scroll depicting a river view of Pittsburgh from the 1930s; he crafted each panel from memory of scenes he saw while traveling by train throughout the city. Because it’s not directly related to Phoennik’s wartime service, Soldiers & Sailors has offered it to the Sen. John Heinz History Center.

After the war, Phoennik met and married his wife, Ruth. They’ve been married for 60 years, adopted two children, Mary and John, and have three grandchildren. After Phoennik retired, the couple toured the country  (visiting all 50 states) as well as other areas of the world. They returned to Normandy in 1994 for the 50th anniversary of the invasion.
Phoennik continued to work on watercolors, oil paintings and ceramics until a few years ago. He and Ruth moved to Country Meadows in South Fayette Township in 2010, and his artwork decorates their apartment. 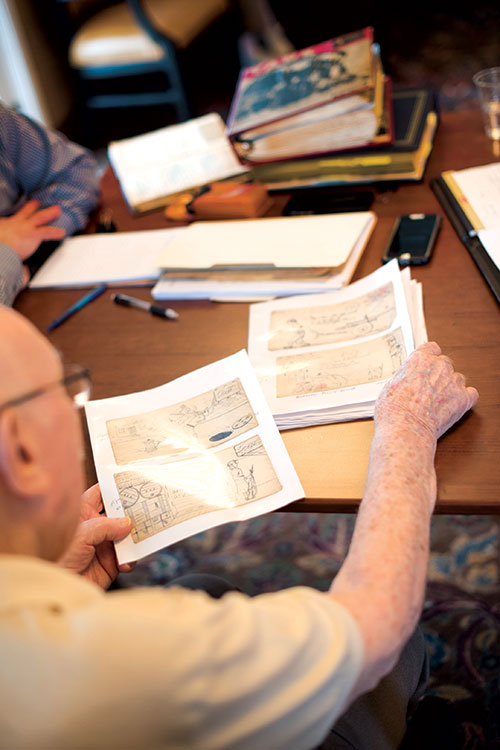 When did you start drawing?
I wanted to be an artist [in high school]. I signed up for commercial art school with the GI Bill, but I never went. It was either go to school or come back with senior level at the mill. It’s funny my dad saved these things [his drawings]. Cy Hungerford was a cartoonist at the Post-Gazette; my dad went over to show him [the artwork], and he said I had a future.

Who did you draw for after the war?
In the mill, I’d draw for some guys who were mad at me.

You sent home other items from the war as well, belt buckles, helmets.
We just found them in the shrubs. We found a lot of things. There were cases of TNT just sitting there.

What do you do when you find a case of TNT on the side of the road?
Leave it there!

You were also responsible for transporting some enemy soldiers?
One time I rode in a truck with German POWs; I had this load of them in the back. They could have pushed me right out. I had a rifle, but what good does that do?

Why do you think they left you alone then?
The war was over. Their fight was over.

This article appears in the November 2016 issue of Pittsburgh Magazine.
Categories: Community Feature