Why You Need to See 'Hunger Games'

Rising above the white noise of hype and anti-hype, Jennifer Lawrence shines in a science-fiction gem. 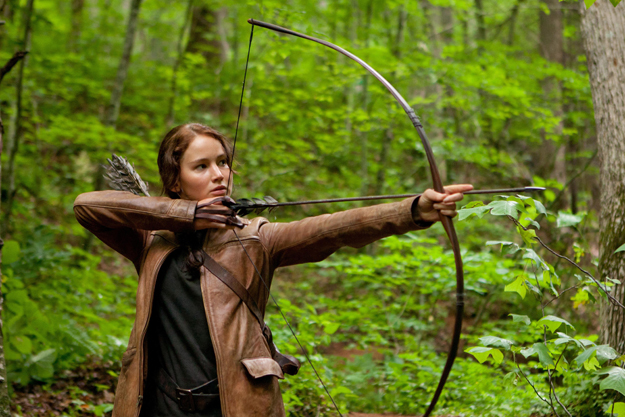 As much as I’ve always been a big movie guy, I’ve never really gone crazy for a major event-type premiere. I don’t breathlessly line up at midnight for the release of this or that, I don’t count the days until a sequel or remake appears at the multiplex, and (other than that time I saw Freddy vs. Jason three times in a 24-hour span when I was 18) I try to be patient, even when it comes to releases I am eager to check out.

This is largely because I haven’t been too nuts for the powerhouse franchises of late. Harry Potter? Never read the books, never saw any of the movies until I had to review them. Lord of the Rings? Like the movies a lot, but never got more than 150 pages into the first novel. Iron Man, et al? They’re fun, but I’m not generally a comic book guy. Twilight? Hate the whole operation with a fervent passion, as everyone should.

The great exception to this rule, however, arrives this weekend. I first encountered Suzanne Collins’ Hunger Games series on Christmas morning, 2010. The trio of books was sitting under my parents’ tree with my name on the wrapper; my mother had picked them up after hearing some rumblings comparing the novels to the TV show “Survivor”, which we had been watching together. Upon further inspection, we realized that the trilogy was labelled as “young adult” fiction. Slightly deterred, I set the books aside.

That night, I picked up the first novel, The Hunger Games, thinking I’d read the first 30 pages and then, more likely than not, forget about the whole thing. That was at about 11:00 p.m.

I first attempted to go to bed at about 3:30 a.m., a good 200 pages in. I tossed and turned for fifteen minutes, then turned the light back on and resumed reading. I finally finished an hour later, and collapsed, exhausted, into a deep sleep.

So yeah. Much more than some fantasy novels for teenagers.

This Friday marks the release of the first installment of the film adaptation of Collins’ series. The books take place in a near-future dystopia, where the population of Earth has been reduced to an all-powerful Capitol and a dozen outlying districts whose citizens serve the pampered denizens of the city. We know nothing of the cataclysmic circumstances that led to this world — a wise move, dispensing with tedious backstory — we just know that the people of the Districts are poor, unhappy and utterly powerless.

Seventy-five years prior, you see, there was a bloody uprising, squashed by the vicious Capitol; now, as punishment and memorial, the powers-that-be randomly select one teenage boy and one teenage girl from each of the twelve districts to fight to the death in a vicious (televised) competition, the titular Hunger Games. It’s the prime form of entertainment for the people, a brutal hybrid of the Super Bowl, “American Idol” and Renaissance-era public executions.

In this setting, we meet plucky Katniss Everdeen. She lives in the last (and poorest) of the districts, and supports her helpless 12-year-old sister and near-helpless mother by hunting beyond the district borders. When her sister is selected as the district’s “tribute” for the Games, Katniss volunteers to take her place, and away we go.

The next two novels in the series delve more fully into the politics and struggles of this fragmented society, but the first installment is all about Katniss’ foray into the arena. On screen, The Hunger Games retains the breakneck pace that kept me reading until the wee hours; without a moment to think, Katniss is hurled from District 12 to the Capitol, groomed, trained and interviewed, and dropped into the deadly arena. She doesn’t have time to think about the people, the politics, the ramifications; she only can think of the family she must support, and thus, she has to win.

Jennifer Lawrence, the 21-year-old powerhouse nominated for an Academy Award for Winter’s Bone, gives life to Katniss, perfectly capturing the reluctant, defiant confidence that carries the protagonist to the arena. As a fan of the series, I can think of no finer choice, and no possible way to improve on Lawrence’s interpretation. And I’m happy to report the same for many of the performers, especially Woody Harrelson as former Games winner and drunken mentor Haymitch, Elizabeth Banks as the officious Effie Trinket, and (most memorably) Stanley Tucci as the slimy game-show host Caesar Flickerman.

The world of The Hunger Games is immaculately realized. Ample credit (and hopefully, some Oscars) should be given to the below-the-line crew, as the setting, look and feel of the movie are more than enough to sweep viewers instantly into Katniss’ world. The direction, from Gary Ross (of Seabiscuit and Pleasantville) suffers a bit from some overly-shaky camerawork in the first act, but catches up to itself by the time we get into the arena.

So, for fans, The Hunger Games is just about perfect. It’s faithful, imaginative and expertly constructed. I can’t imagine true devotees of the series having much to complain about. What is missing from the books would either bog the story down with exposition, or fail to translate properly to the screen. Nothing of any consequence is changed or reinterpreted, and the design elements illuminate the book, rather than modify it.

But the real question still confronts us: What of non-fans? While I would strongly urge anyone with a genuine interest to read the novel before they buy a ticket — after all, it only took me about five hours — I’d like to think that the uninitiated will still be able to enjoy The Hunger Games. The film is careful to leave questions and explanations unanswered only when they won’t detract from the flow of the movie, and I believe that the missing details will only create a sense of mystery and confusion, rivaling Katniss’ own, in viewers unfamiliar with the printed version. In short, read the book; but don’t be afraid to see the movie if you haven’t. You’ll certainly be motivated to do so after the credits roll.

And finally, a word on the film’s appeal to (and appropriateness for) children. I’m always shocked that anyone younger than the middle teenage years has read The Hunger Games, owing to the obviously dark themes and graphic violence. While the books are certainly written at a level that younger readers can understand, the graphic content is fairly brutal; I’d liken the scenes of violence in the arena to that of a Stephen King novel, fully realized and unflinching. For that reason, I wouldn’t recommend the books to anyone younger than 14 or 15.

However, if your young ones have already read the books and are clamoring to see the film, I’d say that the movie is far less violent than the books. Yes, this is a film about children fighting to the death, and the vast majority are killed, mostly on-screen. However, the presentation of the violence is usually tactful, and not nearly as graphic as it appears in the novel. But because of the inherently dark thematic content and, yes, nonstop murder, I still would caution parents of pre-teens to think twice.

That aside, see The Hunger Games. It’s more than a faithful adaptation and a gift to fans of the series; it is simply an excellent film, and one of the most vivid, salient works of science fiction the cinema has seen in decades. No matter how much hype you’ve heard — and I’m sure you’ve heard quite a bit — The Hunger Games will eclipse your expectations.