The North Hills native has collected 500 bags of trash this year alone. 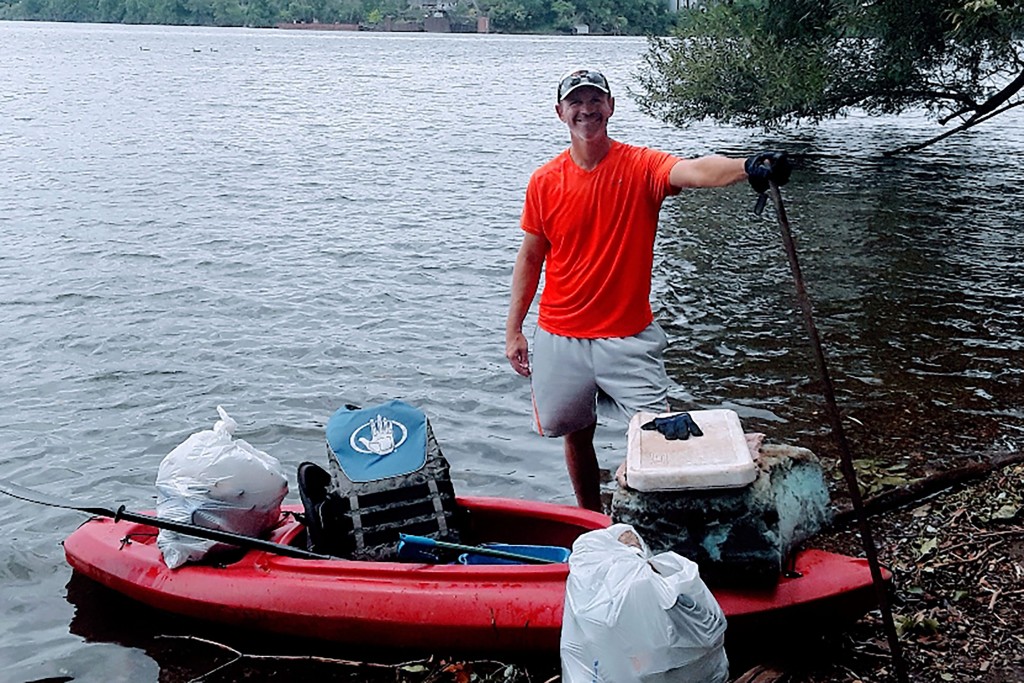 TOM ROSS OF ROSS TOWNSHIP IS PICTURED WITH HIS KAYAK, WHICH IS FILLED WITH LITTER HE COLLECTED ALONG THE OHIO RIVER | PHOTO COURTESY TOM ROSS

It’s not uncommon to see Tom Ross of Ross Township kayaking along the Ohio River, carting heaps of Styrofoam, plastic bottles and other trash he has collected in an effort to clean up Pittsburgh.

Ross, a 1992 graduate of Shaler High School, has taken it upon himself to clear the city of litter — one bag at a time.

His goal was 500 bags, which he surpassed last week — just before he and his wife, Jacki, head to their winter abode in Florida.

“I always wanted to get involved and try to clean up the city,” says Ross, 48, a retired banker. “I have been tweeting about the litter I pick up, and encouraging people to pick up trash, even if it’s just one piece a day.”

He noted he only got serious about his cleanup efforts this year. However, he and Jacki try to help various organizations with their organized litter pick ups.

“We try to find other people who might be picking up litter around the globe. When we were in Clearwater, Florida, I had a streak of 79 days of gathering at least one bag of litter,” Ross adds. “There are a lot of people around the globe doing this on their own.”

Though Ross’ operation is mostly a one-man show, Jacki sometimes helps him gather trash and other items.

“She found a large car part that I tweeted about,” says Ross. “Some of the strangest items I have found were a Legendary Waylon Jennings CD, an owl figurine and a decorative skeleton hand and arm after Halloween in the North Side. The largest item I find frequently are huge chunks of Styrofoam along the Ohio River. I don’t know where it comes from, but it takes up half of my kayak. I was amazed at how much litter was in the water. The most common item I find is single-use plastic bottles. You can’t even fathom how many plastic bottles there are in the river. It will blow your mind.”

Ross typically chooses spots in the North Side to clear, but will stop wherever he sees an area that needs a little TLC. In a single day, Ross has recorded collecting 12 bags of trash in an area along Route 65.

He credits the City of Pittsburgh’s 311 operators and Public Works Department for disposing of the bags he collects around the city.

“I contact 311 from the ‘My Burgh’ app, and let them know the location I am leaving the bags. I try to leave them near trash cans and crews will come and pick them up. As long as I give the location, they always pick them up. The 311 team and the Public Works Department have done a great job disposing of the litter.” 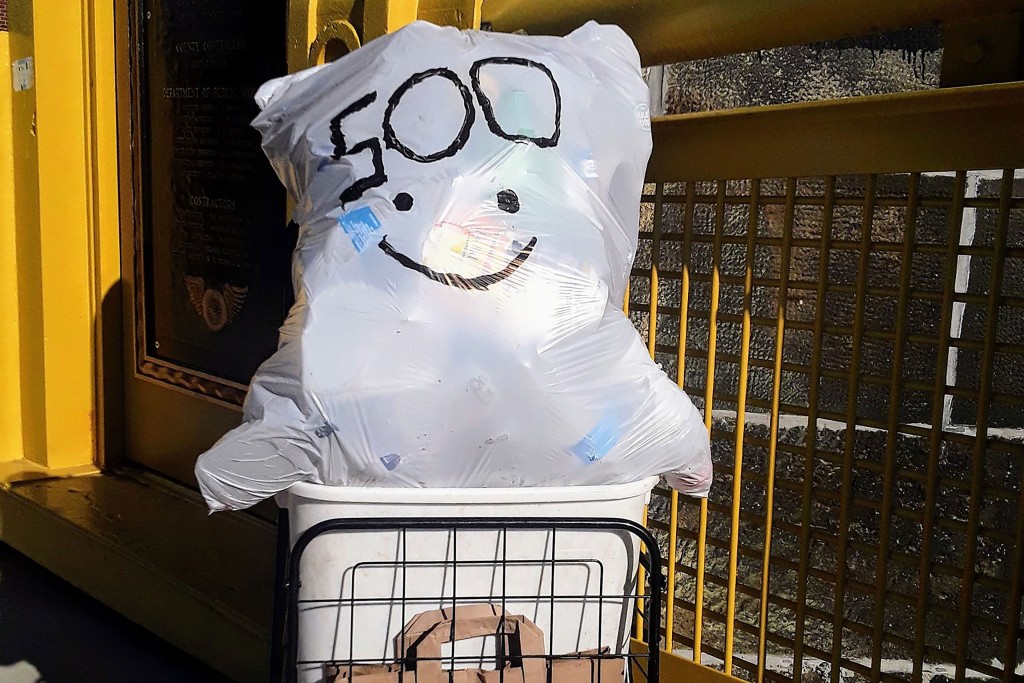 TOM ROSS OF ROSS TOWNSHIP HAS COLLECTED 500 BAGS OF TRASH AROUND PITTSBURGH THIS YEAR ALONE.

Ross says if more people would be more vigilant in finding trash cans to dispose of their garbage, it would be a big help.

“It’s not like there aren’t garbage cans around. People have to have some respect for the planet.”

He suggests residents join local groups in their efforts to clean up neighborhoods, like Friends of the Riverfront or Allegheny Cleanways.

“Even if you can’t join a group, get a bucket or bag and some gloves, and pick up areas in your neighborhood. Or, even if you see a plastic bottle lying on the ground. Just pick it up and throw it away. If everyone did that, everything would be so much cleaner.”

Ross adds Pittsburgh’s ban on single-use plastic bags, which goes into effect in January, is a fantastic policy for the city to embrace.

“It’s about reusing items. I always take reusable bags to the store with me. It’s just a habit you get into. Instead of stopping at the convenience store for a bottle of water, fill one up at home. We are in such a consumer-driven economy that people think nothing of buying a single-use item and throwing it away. The planet just can’t handle this stuff.” 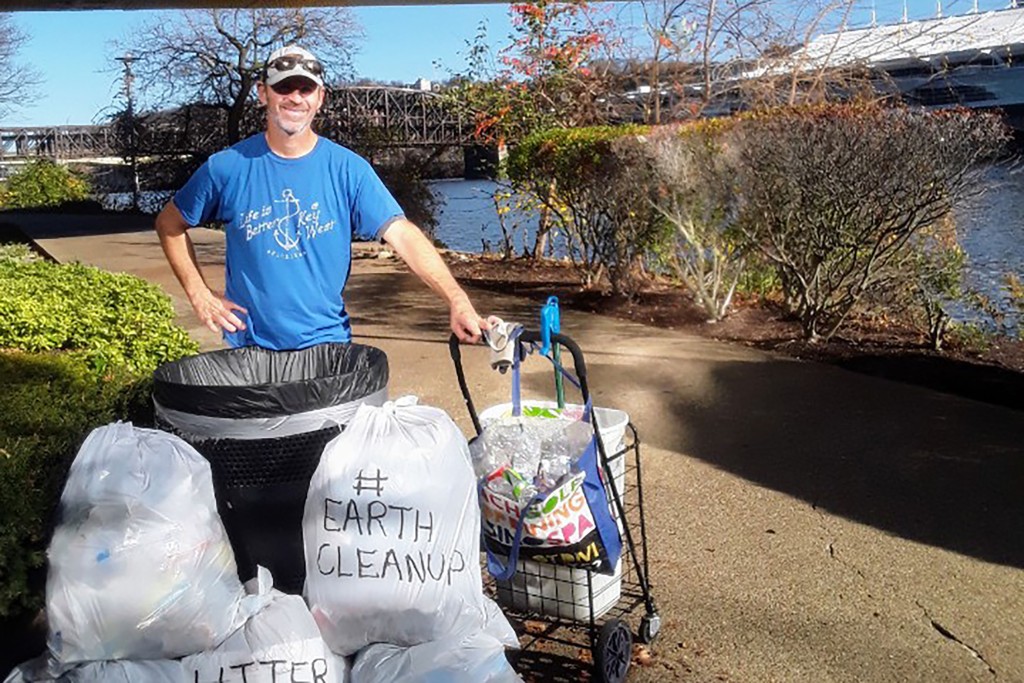 Ross is going to continue to encourage Pittsburghers to do their part to clean up litter. His Twitter feed, TommyPicsUpTrash, can be found here.

“I’m not going to stop. I found my niche. It’s really part of my life now. I’m retired, so I have the time to do it. It feels good to do something even if you’re helping out in a small way.”