Why Things Get Squirrely Near the Tunnels

PittGirl doesn't know why we say "warsh" — but she has figured out why we 'Burghers hit the brakes at the sight of the Squirrel Hill Tunnel. 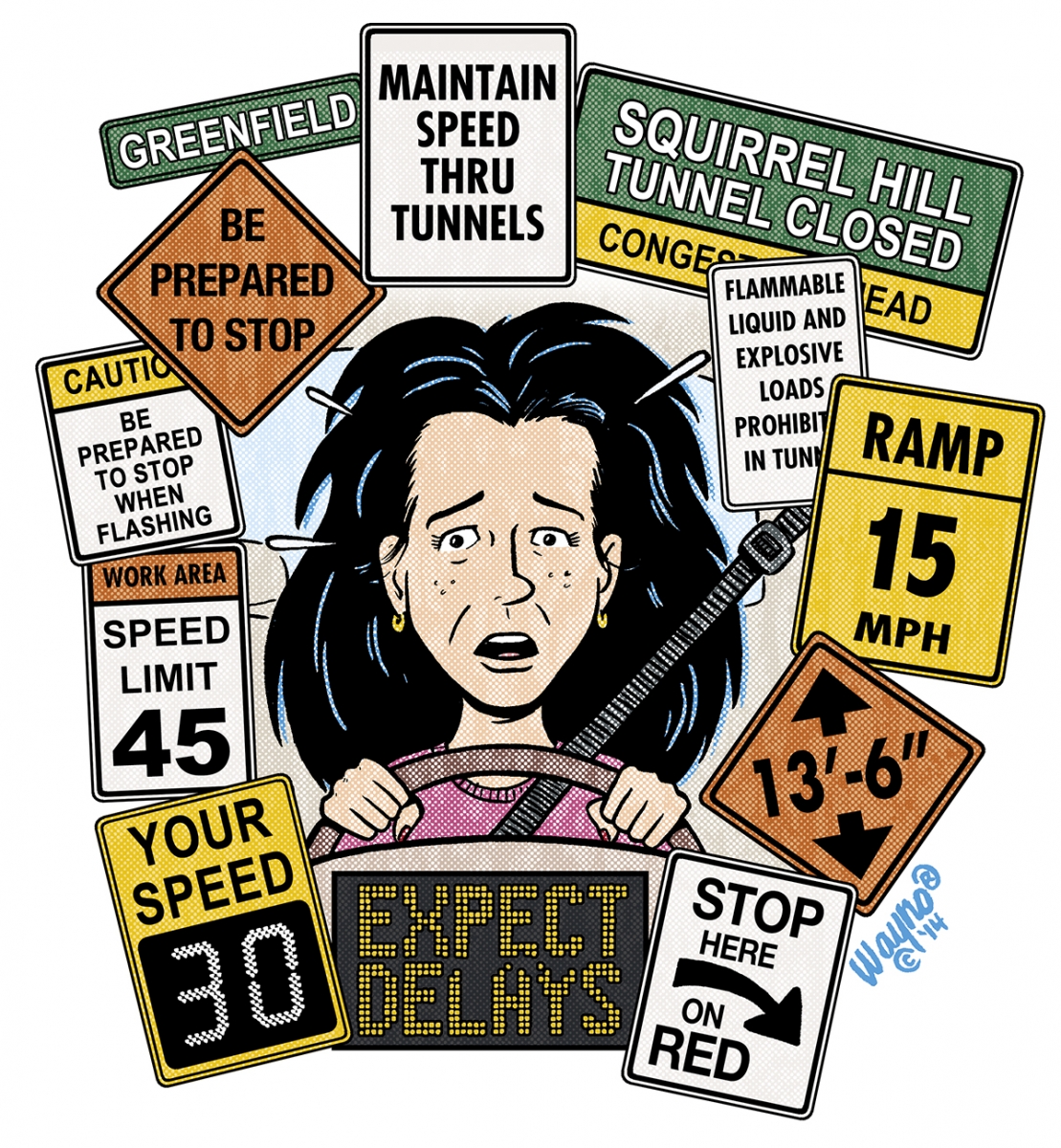 Why the devotion to topping things with fries? Why, despite its existence for all of time, can’t we figure out how to deal with snow properly? Why did we steal all of Boston’s Rs and stash them in words that don’t actually need them? Why the heck are we slowing down before tunnels?

I can’t tell you why you’re saying “warsh,” but I may have solved the tunnel mystery.

I Sherlocked it one day while approaching the outbound Squirrel Hill Tunnel. I caught myself slowing down . . . to read. Not to read my speedometer, which was falling from 65 to a blazing 40. Not to read a text message from my mother (“gt th blg soo tx ssgs LOL”) . . . because that is not safe. Not to read the fat content on the 500-calorie chocolate “health” bar I grabbed at Whole Foods. (“It’s GOOD fat,” she says as she adjusts her Spanx.)

No, I was reading all of the new road signs. Reflective rectangles of every size and color bombarded me as if I was about to launch a space shuttle rather than drive a car through a hole in a hill — something a trained monkey likely could do.
The next day, I decided to count every sign approaching the mouth of the beast.

Hold onto your parking chairs . . . more than 40 signs. (Inbound isn’t much better.)

It starts out innocently. “Tunnel 3/4 mile. Truck over height when flashing.”

“Be prepared to stop.”

Then, in case you forgot from 40 yards ago, “Squirrel Hill/Homestead. Overhead truck warning. We totally mean it this time, you guys. And stay in your lane, jagoff.”

If you’re driving one of those cars that don’t have speedometers . . . there’s a huge electronic sign displaying how fast you’re going. Or maybe how fast the guy next to you, in front of you or behind you is going. ONE OF YOU IS TRAVELING AT AN INSANE 42 MILES PER HOUR.

You might have slowed down a bit now, and that’s good because you’re also going to see two huge signs, each with flashing yellow lights, warning you again: “Be prepared to stop.”

If you fail to note that you should be prepared to stop because you were too busy writing an allegorical two-page, single-spaced paper on the plot twist you had noticed 10 signs back, it’s OK — you’re going to see an IDENTICAL sign pair ahead. This pair will enter your line of vision BEFORE the first set of signs is out of it. BE PREPARED TO STOP because cars are slowing down to read our signs. Your paper is due tomorrow, FYI.

You’ve slowed down. You’ve read the 40 signs. You’re prepared to stop, foot hovering over the brake. You’ve ensured you’re not hauling any flammable liquids, as four signs have warned against. You’re not over-height, as three signs have warned. You’ve included a bibliography and page numbers. You’ve now slowed to 35 miles per hour.

You jerk! Don’t you see the signs next to the “Pedestrians Prohibited” signs and the “No U-Turn” sign? Don’t you realize they want you to “MAINTAIN YOUR SPEED?”

But you’re slowing down because you still haven’t read the four “Stay in lane” signs. (The actual hellmouth will open, unleashing the tunnel monster if you change lanes within a Pittsburgh tunnel.)

Before you fully pass the “Maintain your speed” signs, you’re going to read the very next set of signs, which by now should be very familiar to you, like a warm blankie . . . “Be prepared to stop.”

Maintain your speed! Be prepared to stop! Over height! Speed limit! No U-Turn! Flammable! Why are you speeding? Why are you slowing down? Stay in your lane! This highway was adopted! Look for the second book in this exciting trilogy to be released in early 2015!

No wonder we’re slowing down. We’re being hit with a wall of unnecessary signage. There are helicopter parents in Upper St. Clair who still cut their 17-year-old’s grapes in half who would call this EXCESSIVE. At this point, the only way PennDOT could further encourage braking before tunnels would be by requiring us to exit our vehicles and push them through the tubes.
Almost makes you wish the tunnel monster would just rise up and swallow you whole.

You might be dead, but at least you’ll get out of writing that paper.

This article appears in the November 2014 issue of Pittsburgh Magazine.
Categories: PittGirl