Why the NFL Lockout Should Make You Madder Than Hell

It's time for the Rooneys to talk some sense into their fellow owners. 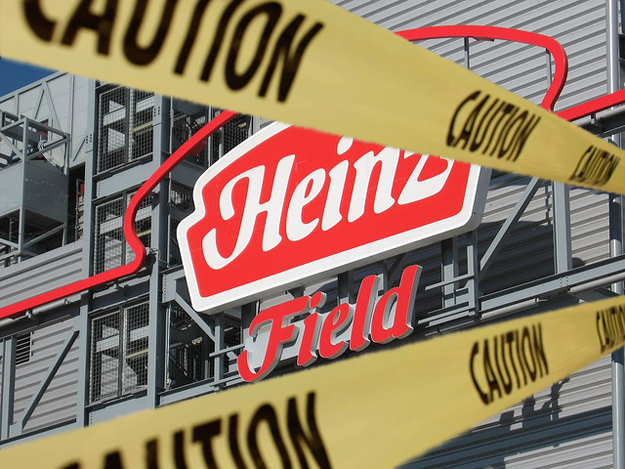 Thanks to Jerry Jones and Robert Kraft’s roving gang of scallywags, our worst fears are starting to come to fruition with every passing day.

In a mere 11 weeks, the Steelers are supposed to descend on the Gaelic green hills of St. Vincent College in Latrobe and cram themselves into the tiny dormitories just like their ancestors—Lambert, Greene, Ham and company. For die-hards, Latrobe is mecca. It’s the place they first got to witness Mike Wallace’s scintillating speed, Lawrence Timmons’ tantalizing open field tackles and Troy Polamalu going up-up-and-away over the dog-pile during a goal line stand.

It is, as the cliche goes, where championships are born.

Only this year, there’s a very good chance that the campus will be filled with nothing but meandering priests and summer-school students. The NFL lockout is not just in a stalemate. Even worse, it’s now in the hands of lawyers.

NFL fans are now assigned the depressing task of figuring out who to blame for the mess.

This is an especially tricky issue in Pittsburgh, where the franchise is beloved partly because of its owners instead of in spite of them. The Rooneys are the Steelers. They are one of the few noble, up-right families still running a sports team today. The Rooneys have always treated their players like family members.

Unfortunately, that’s not standard practice around the league, and the Rooneys’ tag-team partners in this labor dispute are a collection of hucksters, grifters and pearly-veneered snakes that have warped and twisted a straightforward cash-grab into a quasi-political debate.

In this fantasy world, the owners have painted themselves as spartan capitalists who are fighting a greedy and bloated players’ union.

Nothing could be further from the truth.

The most common misconception is that a bunch of millionaires can’t seem to figure out how to split a $9 billion industry. Actually, both sides worked out that math just fine in 1993 when the most recent collective bargaining agreement was signed. The owners and players agreed to re-up that agreement five times since ’93, most recently in 2006. During that timeframe, everyone became filthy, stinking rich as the league’s popularity exploded, especially the owners, who were all filthy, stinking rich to begin with.

Yet it’s still not enough. NFL commissioner Roger Goodell announced last year that he wants the league to earn $25 billion in revenue by 2027. 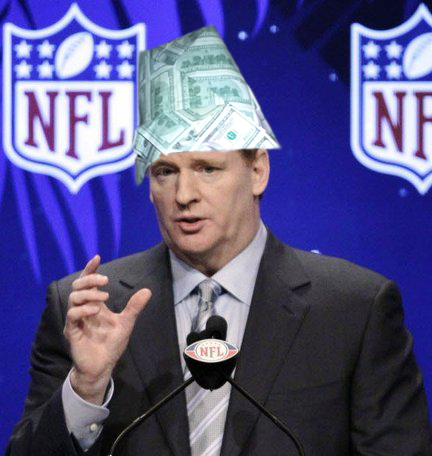 "Look at our money hats!"

According to the owners, NFL franchises simply can’t make ends meet in the current economy. Some are practically waving their Hoover flags.

He’s asked for a public bailout in order to finance a new stadium. $650 million in taxpayer dollars for a $1-billion stadium. The Vikings themselves would only contribute $407 million. When Minnesotans opposed the plan, Zygi took a page out out of the Exxon playbook. He threatened to move his business elsewhere. If he doesn’t get his free hand-out, he’s going to ship a 50-year old Midwestern franchise to, of all places, Los Angeles.

This coming from a man whose franchise generates approximately $200 million in revenue each year, according to Forbes. If things really got tough and Zygi needed Ramen funds, he could always turn to Craigslist. The franchise is worth $835 million overall.

What’s next, Zygi requesting that tax payers pony up some dough so he can sign a competent quarterback in free agency? 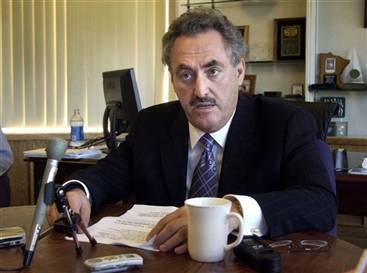 “Sorry, but if I can’t get the funds to overpay for Matt Leinart this summer, I’m afraid I’ll just have to move this franchise to Dubai where we can be competitive.”

None of this crony capitalism and corporate welfare is new. In 2004, Cowboys owner Jerry Jones shopped the franchise around various counties near Dallas until Arlington decided to foot part of the bill. Tax increases funded $325 million of the $1.2 billion tab for the new Cowboys Stadium. Fans were rewarded for their investment with outrageous concessions stand prices including $60 pizzas, $13 burgers and $5 bottled waters.

What dastardly soul would charge that much for a bottle of Aquafina, you ask? Why, Uncle Scrooge himself: Jerry Jones. He had the foresight to join forces with the goodhearted chaps at Goldman Sachs—fellow bailout lovers—in order to create Legends Hospitality, the concessions company that price-gouges his own fans in his own stadium. The very stadium that those fans helped pay for in the first place.

Jones robbed Peter and then robbed Paul to pay himself twice.

But according to his own stupefying rhetoric, it’s the players who are holding football captive. Just listen to his campaign slogan.

“I didn’t spend $1.2 billion to build a stadium and not have the Cowboys playing football in it this year,” Jones recently said, with a jingle-jangle of his Jimmy Choo spurs.

Here, Jones paints himself as a pure-hearted entrepreneur who is simply trying to run his business. How quaint. How downright American. The only problem is that Jones didn’t spend $1.2 billion to built his glorified theme park. Taxpayers bared a significant portion of the burden for fear of their team being moved to San Antonio.

Roger Goodell’s favorite buzzword during this whole charade has been “unsustainable.” In other words, the NFL owners do not believe that they will be able to exist under the current system. The owners don’t want to pay unproven rookies $50 million in guaranteed money, and they don’t want to pay for their own stadiums where they’ll sell $100 parking spaces and $9 hot dogs, and they especially don’t want to give the players their fair share of the sickening $4 billion booty in television contracts.

It’s time for us all to tighten our belts, Goodell says. And yet the commissioner’s insincere call for sensibility comes right on the heels of a Super Bowl played in the league’s shiny new monument: Cowboy Stadium. The one with the $40 million Jumbotron that’s so audaciously big it blocks punts. The one funded by handouts.

Let’s tighten our belts? Here’s a start: How about we stop building One. Billion. Dollar. Stadiums? Heinz Field cost only $281 million to build. It’s a cathedral amongst mega-churches. Who cries poor and then goes out and buys a 160-foot TV screen?

Apparently, Goodell and his cronies believe that charity begins at home. 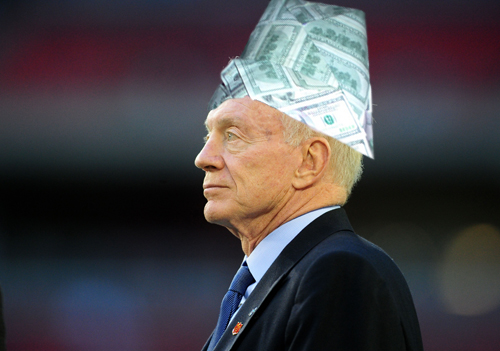 "I got Stetsons made of Benjamins, yaw’ll."

Those misguided fans that are in the owners’ corner like to cite a shocking statistic: According to a study published in Sports Illustrated in 2009, 78 percent of NFL players are either bankrupt, divorced or unemployed within two years of ending their career.

In their minds of the naysayers, this stat is evidence that NFL players can’t manage their money, or their relationships, or their careers. It’s proof that they’re the bad guys. Nevermind the horrific toll the game takes on their minds, bodies and families, now backed up by hard science. And nevermind the fact that the last part of the sentence, "unemployed," is a bit of a head-scratcher. Would players want to be unemployed? Isn’t that called retirement?

The surface-level implication is that players deserve less, not more. The more subversive, disturbing suggestion is that they’re rightful pawns. They’re disposable gladiators for the HD-era. Even worse, they’re malevolent tycoons. A new-money black-hole waiting to implode.

Tell that to LaMarr Woodley, who lead the Steelers to two Super Bowls while making $500k a year, who refused to hold out for a payday, and who put on free football camps for kids, started his own charity, and drove through the night after a crushing loss to the Chiefs in order to deliver turkeys to needy families at Thanksgiving.

Or tell that to Troy Polamalu, who spent seemingly every waking moment the past few off-seasons either in class finishing up his degree at USC, or making life a bit more pleasant for sick kids and disabled Veterans through his various foundations.

Sure, Polamalu deserves less. Give more of his share to Mr. Jones, owner of a Gulfstream Aerospace G-5  private jet.

Or tell that to Baron Batch, the Steelers’ seventh-round draft pick out of Texas Tech—the miracle kid who came from nothing, who grew up sleeping on the floor next to a space heater, who spent his middle school days playing Dad to his younger siblings after his mother passed away, who spent his college days starting a charity for the displaced children of Haiti, who wants to give them all homes if he makes it big in the NFL.

Only he probably won’t, because the lockout is threatening any chance the long-shot has of making an impression in training camp. Because there probably won’t be one. Just an empty field in Latrobe.

Because Baron Batch deserves less. At least that’s what the owners believe.

And if you believe that, too, well then  Jerry Jones has a $9 hot dog he’d like to sell you.

I hope some time this summer Dan Rooney sits down with Jerry and his robber-baron cohorts and gives them a dose of something that money can’t buy. Common sense.