Approaching 30, it's time for Ben Roethlisberger to evolve as a quarterback, if not a person. 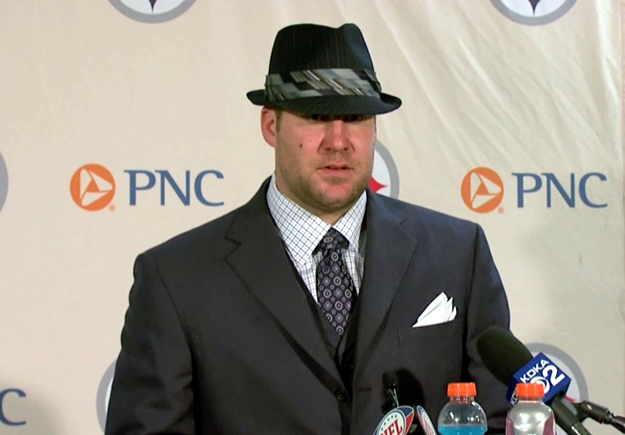 If we ever needed indisputable evidence that the shadow economy of sports entertainment has seeped too far into our collective craniums, the proof came last week during Hi-Gate.

For the uninitiated, highly intelligent people who chose to read a book or play with their children instead of lapping up this delirious Dove for Men soap opera (cue George Thorogood gee-tar twang): Steelers quarterback Ben Roethlisberger and his new offensive coordinator, Todd Haley, did not introduce themselves to one another at Haley’s grand unveiling last week at Steelers HQ. Thus, a presumptive Cold War was born. Columnists hacked away. TV yokels cackled. Twitter was atwitter with talk of a power struggle.

It’s all gone too far, really. Somewhere along the line, after ESPN hinged our eyeballs to the circuits of its Kubrickian post-apocalyptic sportscape and before Doritos released its avant-garde 3-D commercial “Wiffle Bat to the Nuts, Buy Our Chips,” we officially crossed the plane into another dimension. Our overreaction to two grown millionaire men not saying hello to one another in the hallway is the watershed moment of our Brave New World. It’s Khrushchev slamming his shoe on the podium. As we rap our slippers against the TV dinner tray in disgust, we are now officially, unequivocally taking sports too seriously.

After years of tireless work, the Media Industrial Complex has finally turned the sport of Hank Stram and Jack Lambert and Bart Starr into The Real Housebros of the NFL. Every time I turn on NFL Network, I half expect to see Haley in the confessional room sporting blonde extensions and weeping about how devastated he was that Roethlisberger didn’t show up to his charity gala for canine dyslexia.


The original Real Housebro, T.O., pours his heart out in the confessional.

We do this with everything now. Like in matters of politics, economy and other grave national concerns, we obsess over the mind-numbing minutia of sound bytes and manufactured drama, because, really, who wants to sort out the tough questions? What’s a trillion dollar deficit compared to the public glee of Mitt Romney’s “Happy Days” gaffe? The coal-fired social media machine needs its sooty fuel.

Make no mistake, the Steelers have very real strategic concerns going into the 2012 season and beyond which have little to do with the interpersonal relationship of HaleyBerger. Those who worry that the frosty reception will be a long-term distraction need only to look a year into the past. The circus resulting from sexual assault charges and an ensuing suspension didn’t keep Roethlisberger from reaching the Super Bowl.

The truth — the one that we try to spit-shine into submission on Sunday morning pregame shows with soft-lit interviews and puff profiles — the truth everlasting is that, within the confines of sport, you can be both an unbridled asshole and an undeniable winner. I believe this is also called “Wall Street.”

We like to make a big deal out of personal drama because it makes the incomprehensible math of the NFL a little bit more palatable. But the Steelers won a Super Bowl in 2005 when their defensive leader, Joey Porter, wouldn’t have followed Roethlisberger on Twitter, let alone to war. Back then, Roethlisberger barely spoke to anyone outside his small circle, and it didn’t matter, because he was uncommonly good at extending plays and throwing from outside the pocket.

In order to grow as a quarterback, Roethlisberger needs a boss, not a buddy.


And he will get a boss (cue Rick Ross grunt).

Despite the manufactured drama, Haley was brought in to help Roethlisberger extend his career. The two-time Super Bowl winner will only be 30 by the start of training camp, but he has absorbed the punishment of a typical 35-year-old quarterback over the course of eight seasons spent running for his life behind patchwork offensive lines. Consider this: Roethlisberger's peers in the 2004 NFL Draft, Eli Manning and Phil Rivers, have been sacked a total of 194 and 171 times respectively over their careers. Roethlisberger has endured 314 sacks.

Haley wants to keep Roethlisberger in the pocket, where he will ward off pressure with short, efficient strikes instead of his usual madcap escapes to the sidelines.

As Roethlisberger enters his career’s final act, it’s a savvy tactical decision. While he made little effort to hide his frustration over Haley’s plans to give the offense a “clean slate,” Roethlisberger is only getting older. He needs to ask himself how he wants his 30s to play out. If the Steelers have had one fatal, recurring flaw that has undermined their supremely talented teams in the post-Cowher era, it’s predictability on offense.

What matters is not the forest — the overall percentage of runs and passes in a season (also known as the gradual disappearance of Smash Mouth Football). What truly matters are the trees — the crucial plays late in games when the Steelers offense has relied too heavily on old tricks (the bubble screens that opponents could see coming from the break of the huddle, the drive-killing second-and-long-shotgun draws that go nowhere). Too often, the Steelers offense lacked the rhythm and inertia of the high-percentage offenses that they were forced to watch in the Super Bowl.

Last season, the Steelers were an old team based on old ideas. That only works for so long. In today’s NFL, success is all about evolution (just don’t tell Tebow). Roethlisberger doesn’t have to like Haley, but if he wants to be healthy at 35, he needs to adopt his offense.

We think these guys will be around forever. The narrative makes them seem invincible (and for good reason; these Norse Gods do sell us low-financed flat screens and car insurance, after all). But Roethlisberger needs only to look across the league at Peyton Manning, or across his own city at Sidney Crosby, to see that no one is invincible. Hi-Gate is more proof that these yoked up super-jocks are far too old for personal growth, but luckily it’s not too late for Roethlisberger to grow professionally.

With Eli’s Super Bowl win, he now has some extra motivation — a legacy to protect. Brady’s career is fading and he knows it, Manning’s is ending and he doesn’t know it, and the new era needs a champion.

Plus, I can’t wait until these guys finally get together and re-enact the ultimate manshake from Predator. Talk about a power struggle.