The statue was removed from Oakland in 2018 due to racist imagery. 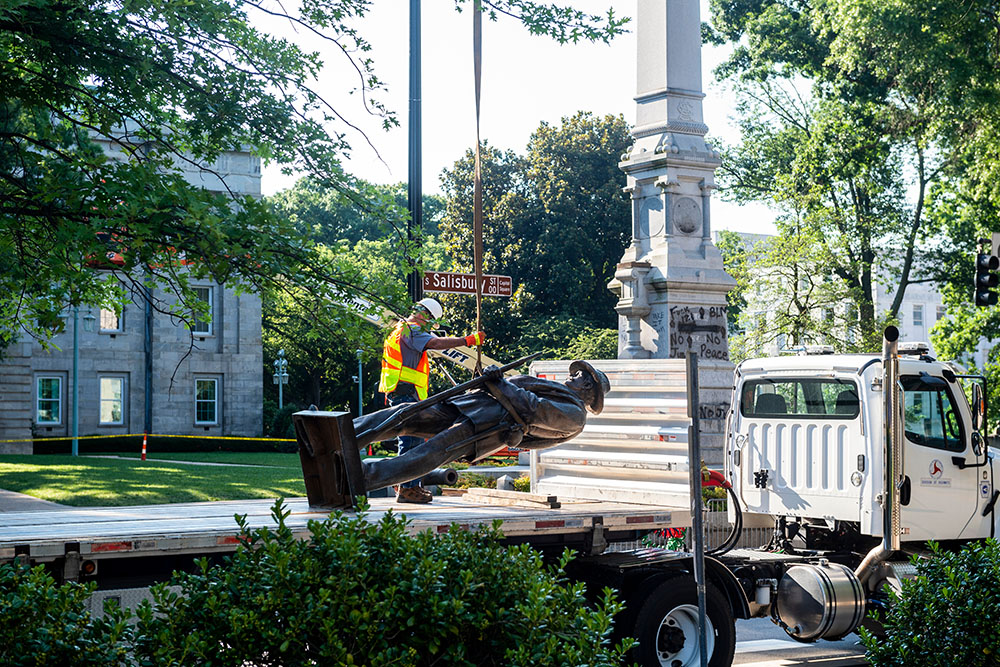 PHOTO: SHUTTERSTOCK | A CONFEDERATE MONUMENT IS REMOVED IN NORTH CAROLINA

In 2018, the Pittsburgh Arts Commission unanimously voted to remove a 118-year-old statue in Oakland — composer Stephen Foster looking down over a barefoot Black man playing a banjo at his feet — because of its racist implications. In the years since, the statue has lived in a local basement, but now, it’s moving to LA.

An exhibition of decommissioned, mostly confederate and “confederate-adjacent” monuments is the newest project of the nonprofit arts organization LAXART and the Museum of Contemporary Art Los Angeles. Tentatively called “MONUMENTS” and slated to open in fall of 2023, it will feature monuments that were removed from their locations because they either honored a proponent of slavery or depicted racist imagery.

The exhibit will also feature newly commissioned works of contemporary art to bridge the gap between then and now, along with “a substantial scholarly publication” and “robust slate of public and educational programming,” according to LAXART’s website.

The art pieces and the educational programming will put the statues in their broader historical context, as well as “confront and challenge long-held beliefs about the real people behind these inanimate objects and the ways in which we can build a roadmap forward.”

Hamza Walker, director of LAXART, told City Cast Pittsburgh that the goal of the exhibition is to “promote civic and civil discussion around American history.” He also said he hopes to note that this is a moment to showcase our capacity for change and resilience as a country while simultaneously addressing the legacy of slavery in America.

The Stephen Foster statue will join 14 or 15 other monuments at the exhibition in Los Angeles, selected from more than 200 statues. Erected in 1900, it sat in Schenley Plaza until 2018, when civil rights organizers called attention to the problematic portrayal of “Uncle Ned,” a fictional slave from one of Foster’s songs of the same name.

That wasn’t the first time groups had called for its removal; criticisms of the statue date back to at least the 1980s, but calls to get rid of it intensified after the deadly 2017 “Unite the Right” rally in Charlottesville, which erupted in response to the removal of confederate statues there. While some defended the statue as a tribute to Foster’s musical legacy, many — including Pittsburgh-based blogger Damon Young, who called it “the most racist statue in America” — agreed that it demeaned the Black community.