Why Kurt Vonnegut Used to Sing in Pittsburgh 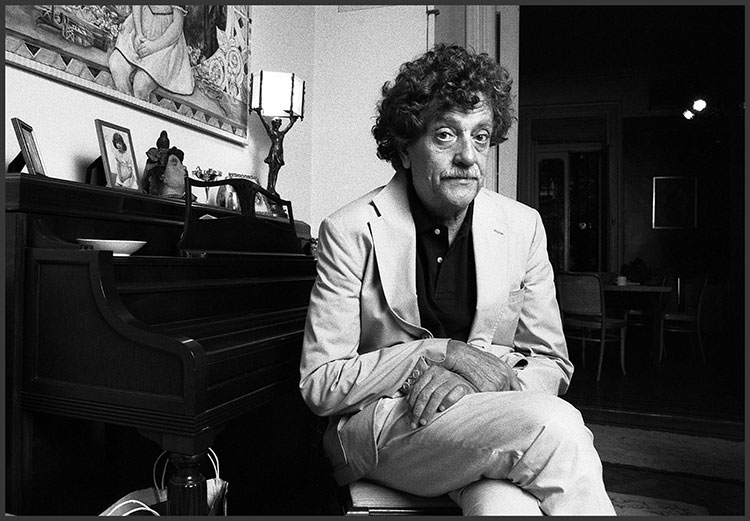 In November 1988, Kurt Vonnegut Jr. spoke at the Fulton Theater downtown as part of the Pittsburgh Cultural Trust’s Creative Achievement Awards ceremony. During the speech, he grumbled about home computers, calling them “the grandest swindle yet,” and he included one of his most popular quotes: “I believe we are put on Earth just to fart around.” An odd tone for an awards ceremony — but the organizers couldn’t have expected anything else.

Vonnegut was born Nov. 11, 1922, in Indianapolis. He studied at Shortridge High School and Cornell University before a brief stop at the Carnegie Institute of Technology (now Carnegie Mellon University) to study mechanical engineering for the U.S. Army; he was reassigned to the University of Tennessee after a semester. He later spoke about his early college days, saying, “I was flunking everything by the middle of my junior year. I was delighted to join the army and go to war.” In 1944, he was sent to Europe as an infantry scout and survived the Battle of the Bulge but was taken prisoner by the Germans; he was held in Dresden when Allied forces fire-bombed that city for three days in February 1945.

Short as his Carnegie Tech stint was, it seems to have left an impression. In 1992, when he appeared again at the Fulton (later renamed the Byham) as part of the Three Rivers Lecture Series, he wowed the audience by singing an old Carnegie Tech song. He was quoted in the Pittsburgh Post-Gazette: “Every time I come to Pittsburgh, I sing this song. I hope you don’t mind me repeating myself.”

I remember seeing Vonnegut a few years before that, when he spoke on Feb. 15, 1989, at the Carnegie Music Hall in Oakland. He ranted then against the National Rifle Association and bemoaned much of modern American society. “It is now widely understood that anything even remotely resembling the Sermon on the Mount must be socialist,” he said. “We are becoming less American, less humane.”

Pittsburgh also is a factor in Vonnegut’s first novel, “Player Piano,” in which workers largely have been replaced by machines and Pittsburgh is the biggest production center in the eastern United States. On the website abebooks.com, there are many copies of “Player Piano” for sale. The most expensive is autographed, “Kurt Vonnegut, Jr. Signed at Heinz Hall Pittsburgh / 11-17-71.”  An accompanying note says Vonnegut was in town then as part of the International Poetry Forum. Price: $7,500.

In 2007, Vonnegut fell and hit his head in his New York City brownstone. He died a short time later on April 11. As the Tralfamadorians, the aliens who keep Pilgrim in a zoo for much of “Slaughterhouse-Five,” would say, “So it goes.”

This article appears in the July 2015 issue of Pittsburgh Magazine.
Categories: Rick Sebak