In addition to being what she calls “a perfect location,” Etna offers affordability that was essential to Jessica Semler’s life in Pittsburgh. 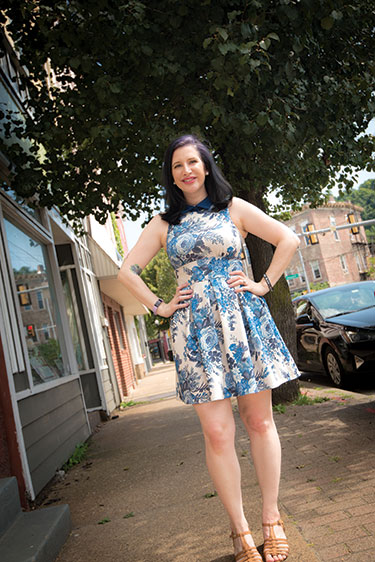 When Jessica Semler moved to Etna in 2015, it wasn’t quite a homecoming; she had grown up elsewhere in the North Hills. The tiny borough did, however, hold plenty of personal history for her.

Semler, 33, was just looking for an apartment when she found a unit in the house she now owns. “It happened to be one block over from where my Dad grew up,” she says. “From my second-floor window, I can see the gym where I had my first slow dance in 7th grade.”

While swaying in the All Saints Church gymnasium, she probably couldn’t have pictured owning a home around the corner — let alone her eventual role in shaping Etna’s future. In 2019, Semler was elected as an Etna councilwoman, representing the borough’s third ward.

“I was approached by one of the older folks in Etna; they knew somebody in my ward was retiring, and they were hoping to get someone new on council,” Semler says. “I said yes without thinking too much about it.”

It was a chance to not only represent Etna’s younger population, but make a change for other people in a neighborhood that had allowed her to flourish. In her first year as a councilwoman, she has supported Etna’s continued push for a stronger environmental infrastructure; the borough was declared an EcoDistrict in part due to implementing green infrastructure to mitigate continuing floodwater challenges. She has also fought for LGBTQ rights and protections within the borough. Semler, who is queer and bisexual, was endorsed by the LGBTQ Victory Fund and utilized a queer-owned Etna business, Etna Print Circus, to print her campaign shirts and buttons. (The company created the popular “Yinz is a Gender-Neutral Pronoun” T-shirts.)

In addition to being what she calls “a perfect location,” across the river from thriving Lawrenceville with a 15-minute commute to Downtown even in the thick of rush hour, Etna offers affordability that was essential to Semler’s life in Pittsburgh. “I was able to live in this house, by myself, with very cheap rent. That was a rare situation.”

After she bought the multi-unit home — she still lives on the first floor — she decided to pay that access forward, offering affordable rent to others in need of secure and economic housing. “[I was] very aware of how lucky I was … to have my own space that I could not have afforded were it not for very unique circumstances.”

While Semler sees plenty of progress and opportunity in her borough, she stresses it will require more buy-in from younger generations to thrive — both in terms of residents moving to Etna and, like her, engaging on a civic level.

“There are so many cool things happening … [but] we need younger folks. Our council skews a lot older. While there’s a lot of participation … representation is really, really important.”