In a word, it's cool, says Jackie and David Rosen. 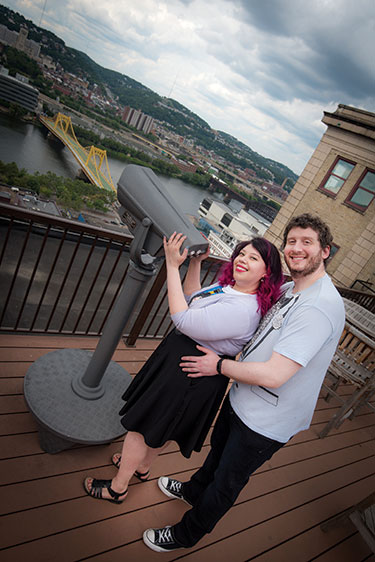 After neighborhood hopping for years, Jackie Rosen didn’t expect to move Downtown. But while she and her husband moved there for an easy commute, they stayed for the convenience and accessibility to nightlife, other neighborhoods and — in sharp contrast to many people’s perceptions — groceries.

Rosen, 32, has lived Downtown for four years. She and her husband, David, previously had resided in Lawrenceville, Oakland, East Liberty and Friendship; they even lived as far as Presto, a small, unincorporated community outside Bridgeville. But after commuting Downtown, David wanted to live where he could walk to his job at Highmark.

“Even growing up, when I would learn that someone was just coming to the city … and they would move Downtown, I would always ask, why would they do that? Did they not know anyone who lived here to talk to them first? Downtown’s not the best place [for a] first move,” Rosen says. “And come two years later, I’m the one living down here.”

Rosen also works Downtown; the couple start their days with a walk and “just some peace of mind.” During lunch breaks, they can return to their apartment to spend time with their cat, Jack, who they befriended as a stray in Lawrenceville. (Rosen promises Jack wasn’t named after her.)

In addition to the convenience to work, Rosen loves Downtown’s abundance of nightlife, cocktail hours and quick bites. Among her favorites spots are Bridges and Bourbon, Olive Or Twist and The Warren — all of which are within walking distance. The accessibility and connection to the rest of the city are also perks that come with living in a hub of many Pittsburgh bus lines.

“I don’t actually drive; my husband does, but I never learned at all. So for me, that was super important because we had lived in places where public transportation wasn’t as prevalent,” Rosen says. Living Downtown, “if I can’t walk to it, I can get a Lyft or a bus within minutes of my front door.”

While she now recognizes the benefits of living Downtown, there was a time when all she wanted to do was get out of Pittsburgh in its entirety. Rosen left the city to attend Earlham College in Richmond, Indiana, and she “definitely appreciated Pittsburgh a lot more when [she] came back from Indiana, that’s for sure.”

“I was gone 2005 to 2009, and I feel like in that time, Pittsburgh grew so much,” Rosen says. “That’s really when Bloomfield and Lawrenceville started to flourish, so it was really exciting to me to come back from chain-restaurant central, back to my own city that had grown so much.”

Rosen sees room for improvement, though. While she appreciates the convenience of urban living, she wishes there was more green space and fewer cars.

“One of the biggest complaints I hear from people when they come into Downtown is how confusing the layout is when you’re driving,” Rosen says. “So that’s something I’d definitely like to see, which I think would also add to the more greenery aspect, potentially. More bike lanes.”

Still, Downtown is the place Rosen and her husband have lived the longest, and that’s where they intend to stay, at least for now.