Why Can’t the NHL Stop Punching Itself in the Face?

Hockey’s unwritten code is hurting the league and its players. 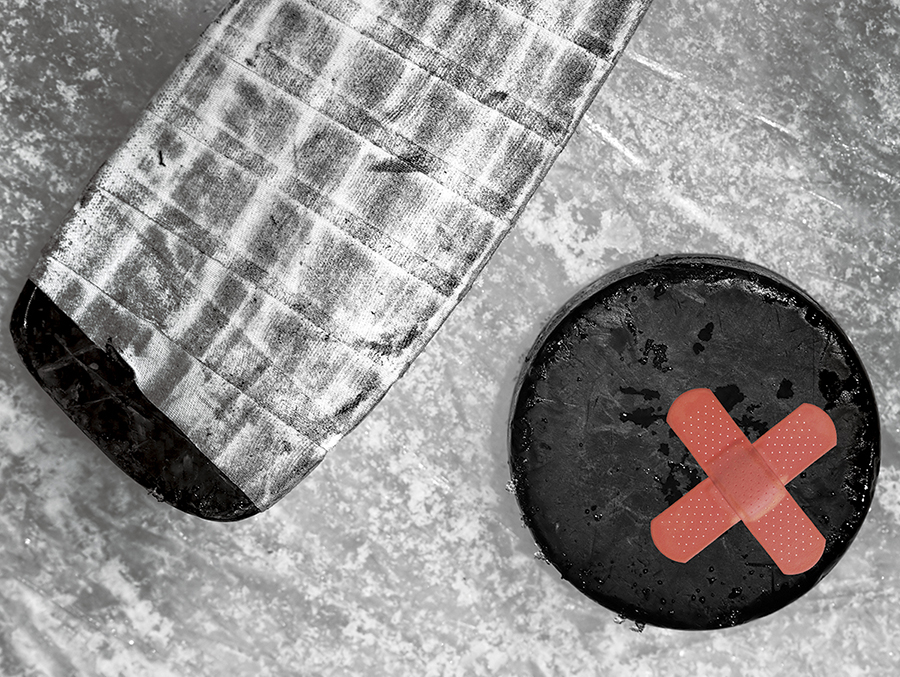 Two weeks before Christmas, Penguins defenseman Brooks Orpik was assaulted and left motionless courtesy of a sucker punch by Boston Bruins enforcer Shawn Thornton. As trainers stabilized Orpik’s head with orange straps and evacuated him on a stretcher, TD Garden fell eerily silent and repressed memories came flooding in: Todd Bertuzzi crushing Steve Moore’s vertebrae with a punch to the spine; Marty McSorley using his stick as a baseball bat to knock out Donald Brashear, again from behind.

Even when Orpik was finally wheeled off, it was impossible to unsee the chalk outlines of Moore and Brashear. We expected those guys to get back up. Always back up. Now, we know too much. Everyone is one shot away from the ether.

“For years, I’d walk 10 minutes from my apartment along the West River and I’d almost be falling over from exhaustion,” says former New York Rangers goalie Mike Richter, who sustained two concussions in less than eight months in 2003, forcing him to retire. “The headaches, the memory lapses, I’m still dealing with them a decade later.”

Those are the stakes. If Thornton’s assault had taken place 1,000 feet away, outside The Harp on Causeway Street after too many dark pints, he would’ve been taken to a holding cell. Instead, he was sent to the locker room. He’d get his due, they said. “The code” would take care of him, they said.

The incident itself was shocking, but the NHL’s response to it was somehow even more damaging. Thornton was suspended a paltry 15 games — an expensive but welcome vacation in the midst of a grueling 82-game season. He was brawling again two games into his return, this time mutually. And why not? The Bruins have a 50-22-10 all-time record when Thornton fights — a perfect analytical bulwark for the old-time hockey evangelists who see fighting as a necessity.

“What’s the code? Nobody ever told me.” says legendary NHL enforcer Chris “Knuckles” Nilan. “Be a gentleman while fighting? You can’t understand the adrenaline, the expectations you feel when you’re out there. Of course bad things can happen.”

At this point, dear reader, you just had a visceral reaction to Mr. Nilan. Either you recoiled with indignation at the thought of bad things happening and concussed hockey players sitting in dark rooms with pillows over their heads to dampen the sound, or you got an unspeakable thrill from Nilan’s cavalier realism.

We are losing something in the modern world. We can’t quite express what that something is, for fear of appearing an ignoramus, or worse, a cultural luddite. But the erosion is real. Things progress, as they should: These are your lungs on Camels. This is your brain on football. Our sins are quantified and marginalized. Things get boring.

Unfortunately, the NHL continues to sabotage itself.

Thornton’s assault wasn’t random. It was the culmination of a snipey, dirty game that’s all too common in the modern NHL. Seconds before Thornton’s meltdown, Penguins forward James Neal had skated directly into the path of fallen Bruin Brad Marchand (himself quite a shin-hacking pest). Neal’s knee just so happened to connect with the back of Marchand's head. Brain-wise, it’s as dangerous a situation as it gets.

"If an athlete isn't ready for the hit, you often have more rotational force on the brain and the neck is a little less strong at helping to absorb the blow," explains Dr. Anthony Kontos. "We've done research with Bauer helmets in high school hockey players here in Pittsburgh and found that about 50 percent of concussions involved hits that would have been a penalty."

Improbably, Marchand escaped serious injury. But that apparently wasn’t the point, so Orpik was maimed in an ensuing scrum.

“The code” is the reason why Orpik refused to speak about the incident even after he recovered and returned to the ice three weeks later. That’s his right. But Orpik’s silence only helps to enable a culture that failed his own teammate, Sidney Crosby. The league played deaf and dumb when David Steckel’s elbow just so happened to connected with Crosby’s head at the 2011 Winter Classic. Steckel could have avoided him, just like Neal could’ve avoided Marchand, but that kind of compassion is sacrosanct to modern NHL culture.

“Guys don’t want to fight over a disagreement anymore, so maybe you look for other ways you can hurt him,” Nilan says.

You would have hoped that Crosby’s year in the wilderness — much of which was spent in a dark room getting seasick in his bed — would have been a tipping point for the NHL. Instead, here we are in 2014 still listening to VP of Player Safety Brendan Shanahan prattle on about unknowables like “intent” after another ugly trainwreck. The two-game suspensions have merely been inflation-adjusted for brain trauma science up to five.

Absurd “Slapshot”-inspired line brawls like the recent gongshow pitting Calgary against Vancouver get all the ink, but they’re nothing more than sideshows that distract from a more sinister problem. For all the hand-wringing over fighting, statistics show that it has declined dramatically in recent years. In 1988, 60 percent of NHL games featured a fight. In 2013, that number declined to 35 percent.

When two players drop the gloves, they know the risk. Fighting, no matter how much we learn about concussion science, is a choice. It’s raw. It’s not for everyone. It’s hockey.

What happened to Sidney Crosby, or Brad Marchand, or Brooks Orpik, is not hockey.

If Orpik’s motionless body made you ill, don’t direct all your anger at the goon lurching around the ice for two shifts per night. Thornton was instructed by his bench to seek out Orpik. He’s just a guy trying not to get fired. There’s a bigger cultural machine at work.

“I was told one time by my coach Jean Perron that I hadn’t been fighting enough lately,” says Nilan. “So I told him where he could go. I ended up getting traded for that.”

Headshots could be gone from the game tomorrow, if only the players would actually do what they say they do so well. Hockey, we’re told, is about protecting one another. Why then, did the NHL Players’ Association back Thornton’s failed appeal of his suspension? How could Thornton and the Bruins have the audacity to appeal in the first place? Why did the entire league stay silent, including the Penguins?

The next time a superstar gets blindsided into oblivion. Ask yourself, “Who’s protecting these guys from themselves?”

Orpik had a chance to change things. He could have said what we’re all thinking — that hockey’s “code” is crumbling. That his own teammate was wrong for kneeing a downed player in the head. That there’s nothing courageous about hockey’s cheapshot culture. But he said nothing. He respected the code. In doing so, he failed Crosby. His silence is deafening.

This article appears in the March 2014 issue of Pittsburgh Magazine.
Categories: From the Magazine, Hot Reads, Penguins