Why Bucky Palermo Is a True Pittsburgh Legend

For decades, the Steelers and Penguins called Bucky Palermo when they needed a job done right. The 84-year-old cobbler has been fixing shoes and athletic equipment in Lawrenceville for the better part of a century. 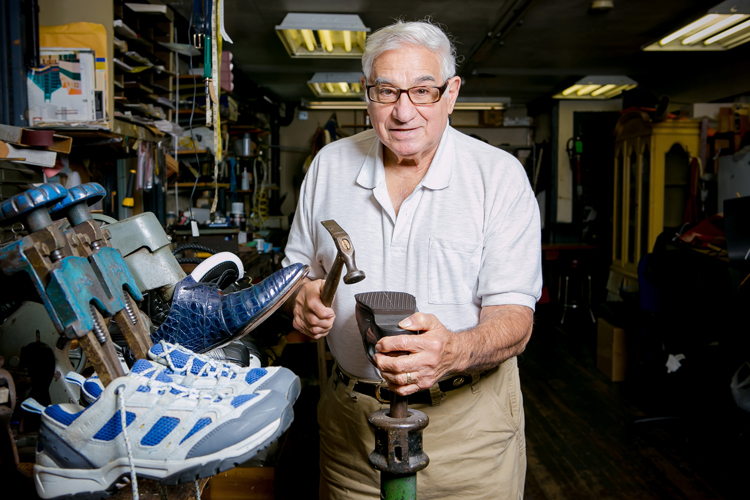 Bucky Palermo has fixed shoes on Butler Street for more than 70 years.

The 84-year-old cobbler began working as a shoe-shine boy at age 10; a local cobbler taught him the business two years later. When Bucky was 16, his father mortgaged the family house to buy another cobbler’s shop for Bucky and his brother, Frank. Palermo’s Shoe & Athletic Repair Center has changed locations a few times, but it’s always remained on Lawrenceville’s main thoroughfare.

By the early 1970s, Palermo’s reputation for expert work had attracted the attention of the University of Pittsburgh Athletic Department — and then the Pittsburgh Steelers and Pittsburgh Penguins. “People will bring stuff in, and you have to figure it out and fix it,” he says of his do-anything spirit. “I don’t know if you call it knowledgeable or what.” 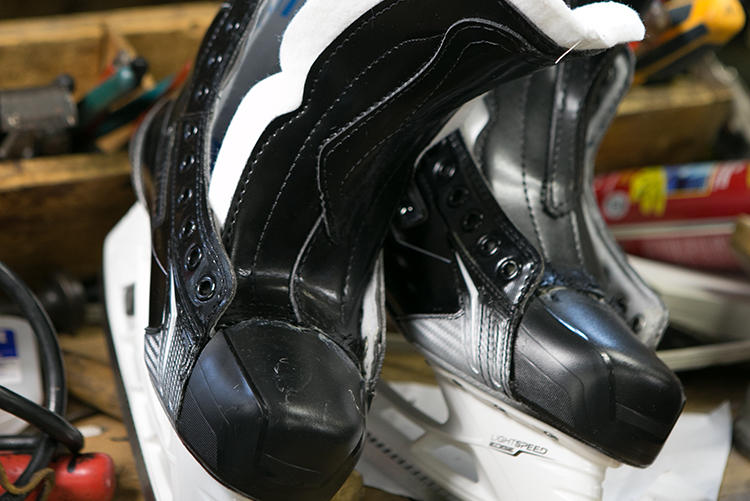 He did jobs for the Steelers throughout the ’70s; L.C. Greenwood’s iconic gold high-tops were created in his shop (and a pair still sits there today). He worked on equipment for Penguins players, among them Paul Coffey (still a friend today), Jaromir Jagr and Mario Lemieux. Pirates such as Dave Parker and Jason Kendall and even out-of-town competitors including baseball greats Jeff Bagwell and Craig Biggio and hockey stars Eric Lindros and Ron Hextall sent their equipment to Lawrenceville.

If servicing everyone from superstar athletes to locals with broken purse straps wasn’t enough, Palermo also worked for 35 years as a pro wrestling referee. He officiated matches from the studio-wrestling era — he was present for the legendary Bruno Sammartino’s first match — through the mainstream boom of the 1980s. 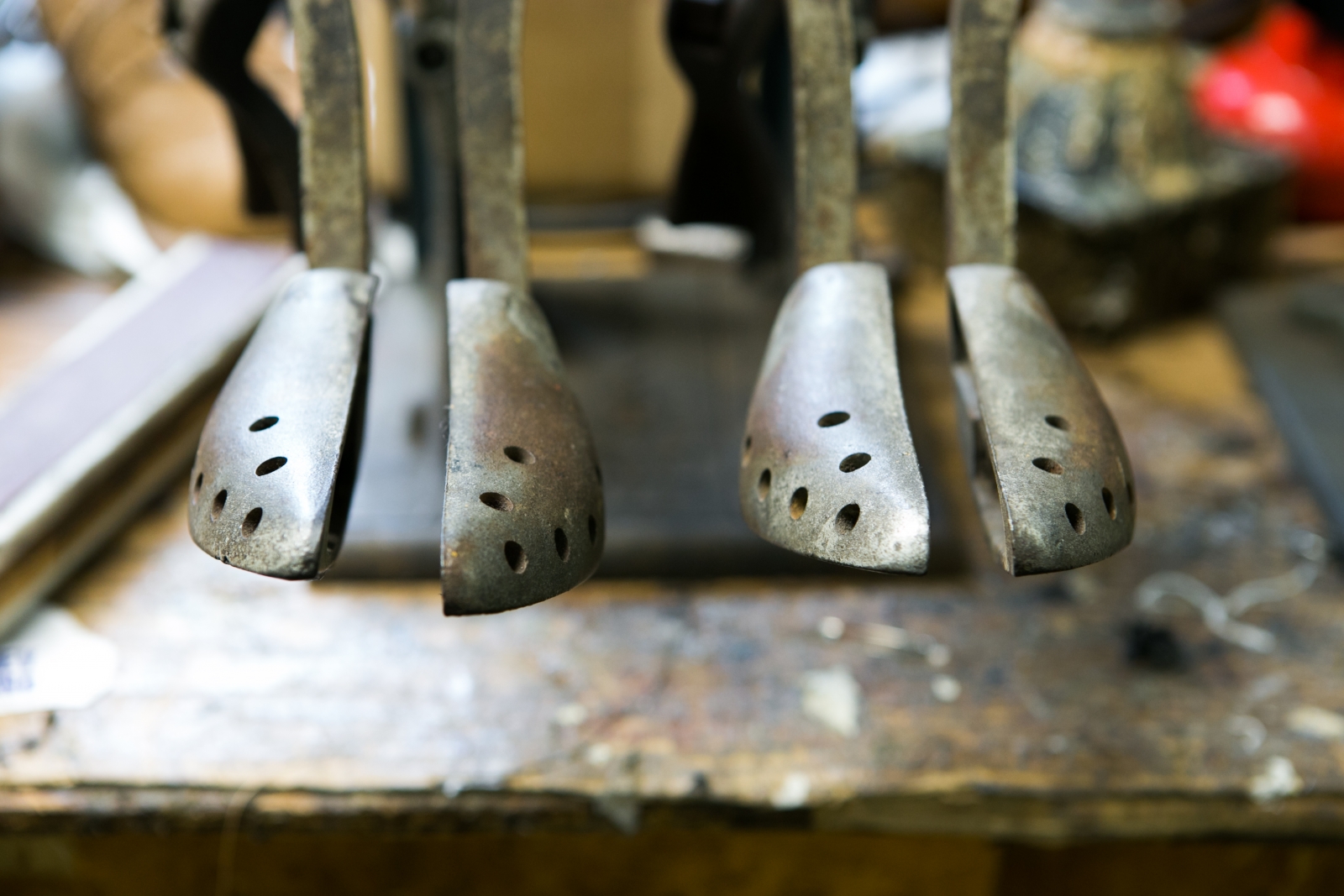 Throughout Palermo’s 70-plus years in the business, his family has surrounded him. His sons, Tony and Eugene, have worked with him, as has his daughter, Kathleen, and his late nephew, Ricky. And, of course, his beloved wife, Kathleen. “[We] worked together all my life,” Palermo says.

Now, Palermo has announced that he will retire at the end of December. “My fingers don’t work quite like they used to,” he says. So if you have an old pair of shoes that needs some work, hurry to Butler Street; don’t miss your chance to put some spring in your step with the help of a true Pittsburgh legend. 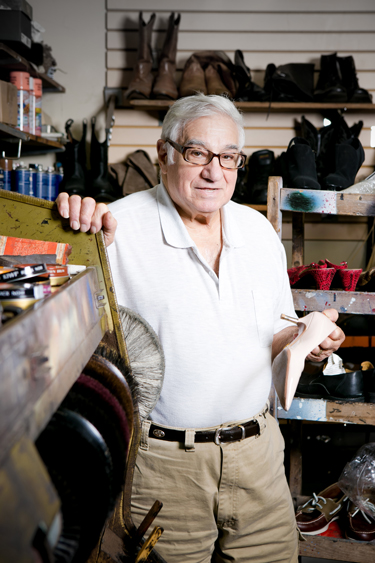 How did you start working on athletic equipment?
Arsenal School was on 40th Street, and [the students] played soccer. The coach came in one day and wanted to know if I could put leather strips on their shoes … I went and got [eight] other schools [the next] year — I think it was in ’62. We ended up with 700 pairs of shoes … but I didn’t know how to fix them. I figured shoes are shoes; they weren’t. They were completely different. Just how to clean them was a job. … It took us from November to June to fix those 700 pairs of shoes … In four or five years, we were going to 140 high schools. We were doing thousands of pairs of shoes.

Did any athletes have odd requests?
Jagr, he used a pair of gloves for two years. Same pair. And he kept sending them in to get patches on them; he would not let me put a new palm on. He just wanted them patched. Finally, after two years, [the team] threw them away. He couldn’t find them … I always did what they wanted done, whether they were right or wrong. I didn’t care.

What did you enjoy about being a pro wrestling referee?
I was a bad referee — I never saw the bad guys do anything wrong, because they wouldn’t do anything in front of you. I always caught the good guys! The fans hated me, and that didn’t bother me — in fact, I loved it. More than a couple of times, they had to get policemen to get me out of the ring. … We were in Johnstown one night, and I counted Bruno [Sammartino] out; they had to get six policemen to get me out of there. … I went out with Bruno and the six cops. Bruno said, “How are you getting out of here?” I said, “I’m going out with you!”

What does the future hold for businesses like yours?
If you pay $50 for a pair of shoes, you’ve gotta pay me $50 to fix them. You’re not going to do that. There ain’t too many of [us] left. [Everyone gets] cheap shoes now … The guys I know [in the business], most of them don’t want to do it anymore — in fact, they send them to me. There’s not that many left anymore. I think there might be 15 of us left in the area.

This article appears in the November 2015 issue of Pittsburgh Magazine.
Categories: Community Feature