Where Will Locks on The Roberto Clemente Bridge Go When the Bridge is Restored?

The bridge will be closed beginning Valentine’s Day through the end of 2023. 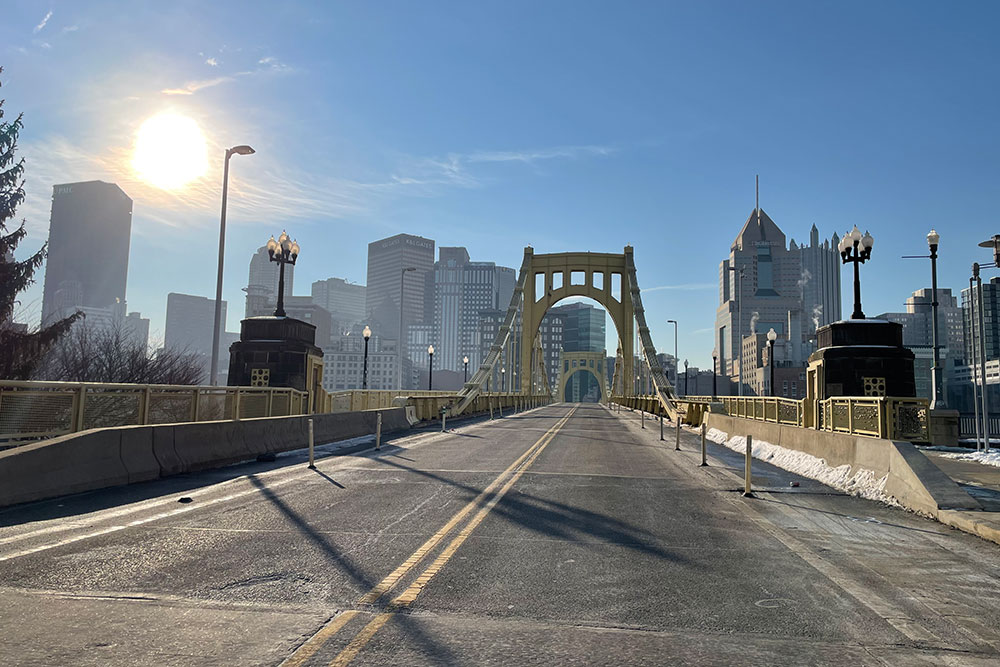 Bridges are on everyone’s mind these days, and for good reason. On Tuesday, the Department of Public Works announced that changes will soon be coming to another local throughway.

The Roberto Clemente Bridge, also known as the Sixth Street Bridge, will close on Feb. 14 through December 2023 for a $34.4 million “bridge rehabilitation,” according to a press release. The roughly 11,000 locks that couples and families have placed around its side rails over the years will be removed and donated to the Industrial Arts Workshop in Hazelwood. 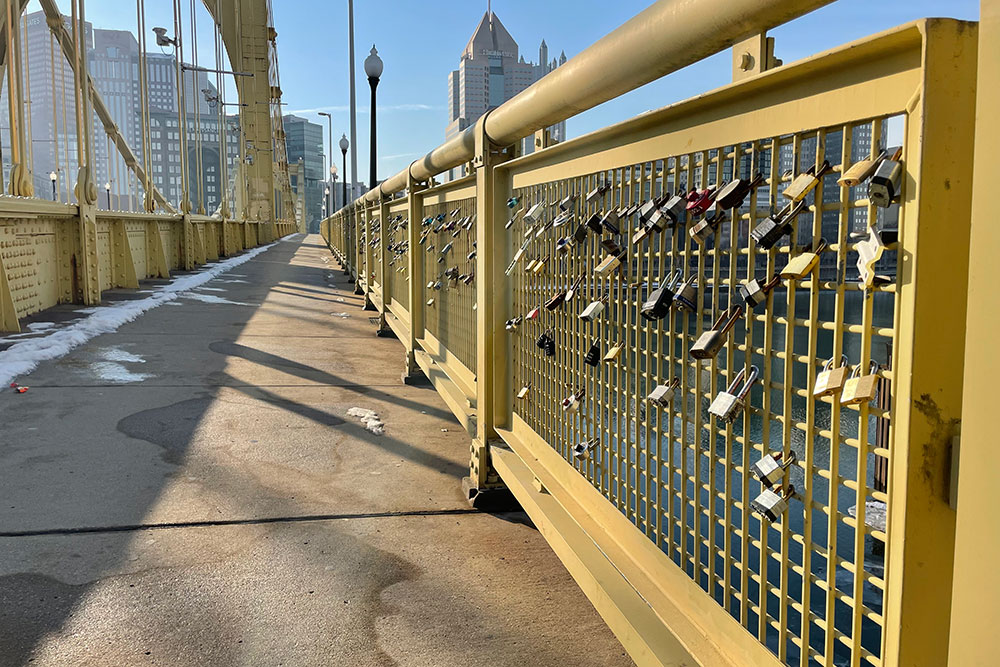 Industrial Arts Workshop Executive Director Tim Kaulen specializes in the creation of large-scale public art; among his well-known pieces are the black geese painted atop the county-owned Philip Murray (South Tenth Street) Bridge, which carries traffic over the Monongahela River and to the South Side.

He hasn’t yet decided what he will create using the locks and where that art might be displayed upon completion.

“I am excited for the opportunity to receive the locks, which are individual expressions from so many people who placed their thoughts and wishes in public,” Kaulen said in a statement. “It doesn’t take much imagination to visualize the web of connections between these locks and the journeys they took to reach such a special place in our community. I look forward to using the locks in a future public artwork that pays tribute to their origins and what brought them together on the Roberto Clemente Bridge.”

After receiving feedback about the locks during a public comment period in July for the bridge rehabilitation project, Allegheny County officials explored how the locks might be reused rather than thrown away. It reached out to several local entities for guidance and found an enthusiastic partner in the Industrial Arts Workshop.

“We worked with Mr. Kaulen to have the geese repainted during our recent Philip Murray Bridge rehabilitation project, and we are thrilled he is willing to partner with the county again,” said Stephen Shanley, public works director, in the press release. “Our department is constantly looking for ways to mitigate our projects’ impact on the environment, so finding a way for the locks to be reused was a top priority for us.” 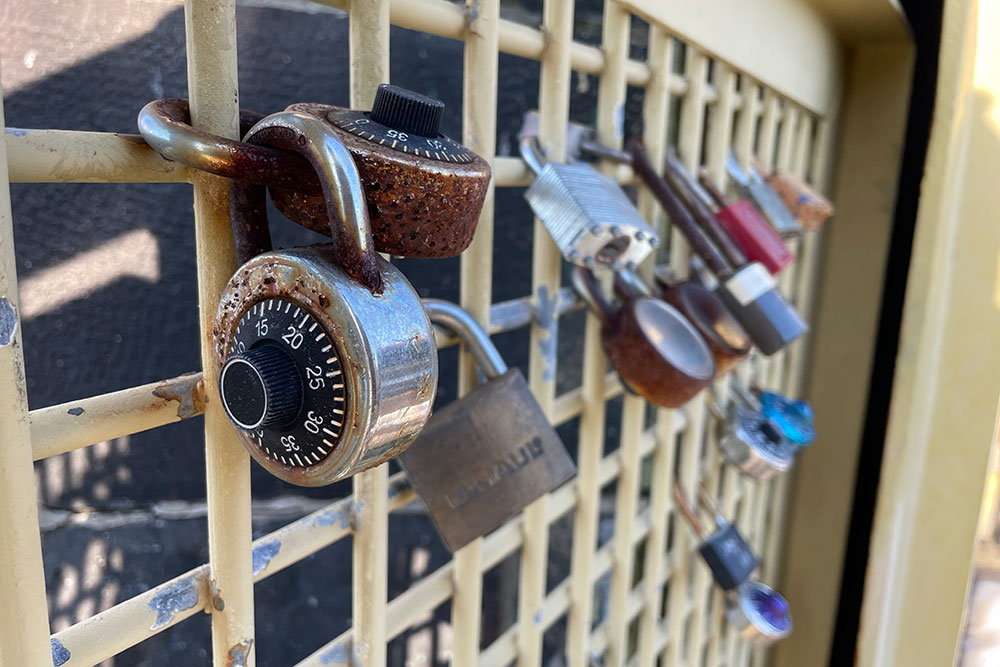 If you and your lover placed a lock around the bridge’s side rails and you’d like it back, you can come and get it anytime before construction begins. Otherwise, it’ll eventually be cut off and donated.

Public Works also requests that residents and visitors stop placing locks on the Roberto Clemente Bridge and other county-owned bridges in the future, as the locks can damage bridge railings, add extra weight to the railings than they were designed to hold and are expensive and time-consuming to remove in bulk.

The Roberto Clemente Bridge — which connects Downtown with the North Side and PNC Park — opened in 1928 and carries 7,895 vehicles daily across the Allegheny River. It’s one of the three Sister Bridges, along with the Andy Warhol and Rachel Carson — the only trio of identical bridges in the world and the first self-anchored suspension bridges in the United States.

The project will be done by Mosites Construction and Development Company of Robinson. Funding is coming from the Federal Highway Administration, Pennsylvania Department of Transportation and Allegheny County. 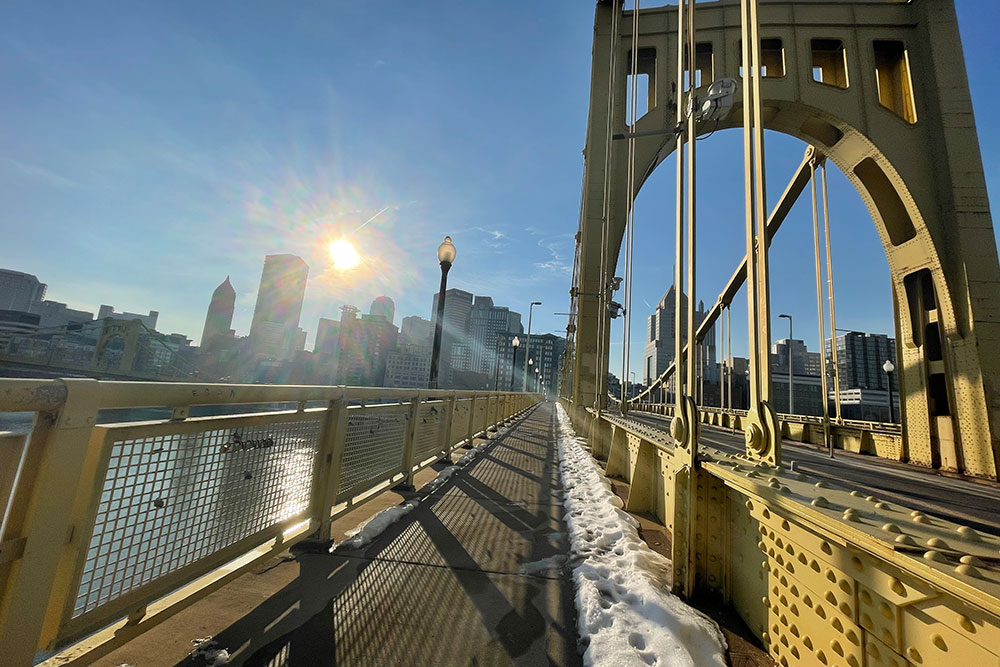 Unlike those projects, the Roberto Clemente Bridge rehabilitation project will not result in a new lane configuration. It will continue to have two lanes — one in each direction — for vehicle traffic and two bicycle lanes.

“The Clemente Bridge is an iconic symbol of Pittsburgh, and one that visitors and residents alike are familiar [with], but it too needs some love,” County Executive Rich Fitzgerald said in a statement. “This significant infrastructure investment will complete the rehabilitation of the third Sister Bridge and also allows the opportunity for a unique, sustainable reuse of the many locks that have been added to the bridge over the years.” 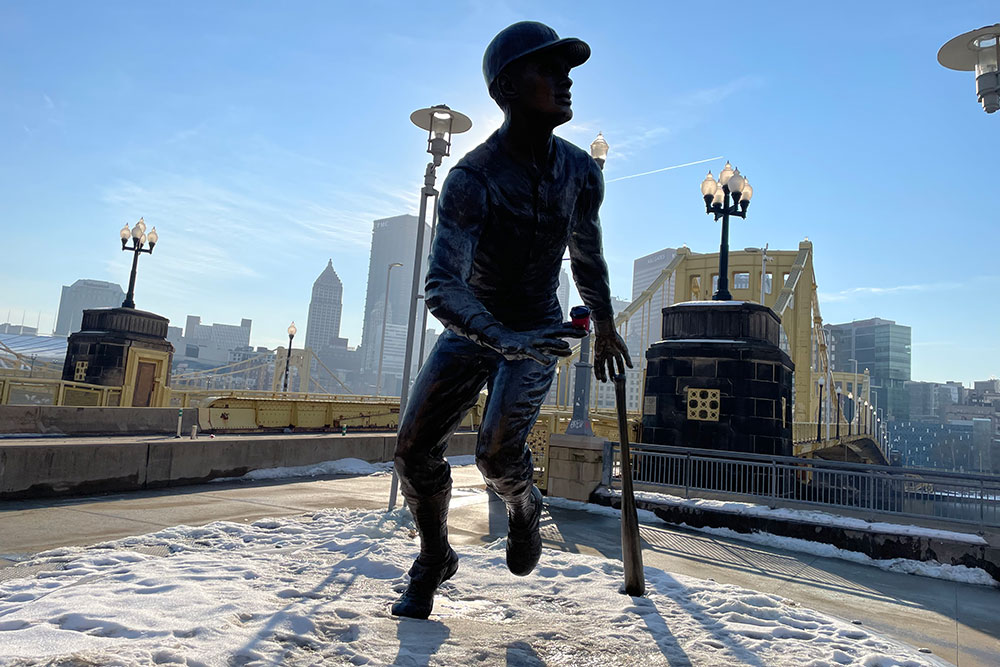 The bridge was last inspected in 2021. The deck, superstructure, and substructure are all rated 5, or in “fair” condition. The report states that the bridge’s “… primary structural elements are sound …”

The announcement about the planned rehabilitation of the Roberto Clemente Bridge comes a few days after another bridge — the Fern Hollow Bridge — on Forbes Avenue that crosses Frick Park between Regent Square and Squirrel Hill, collapsed, injuring 10 people. That bridge was rated “poor.”