Where to Find the Season’s Best Pumpkin Beers

Harris Grill features a quartet of pumpkin ales and Boo and Brew offers seasonal sips for a worthy cause. 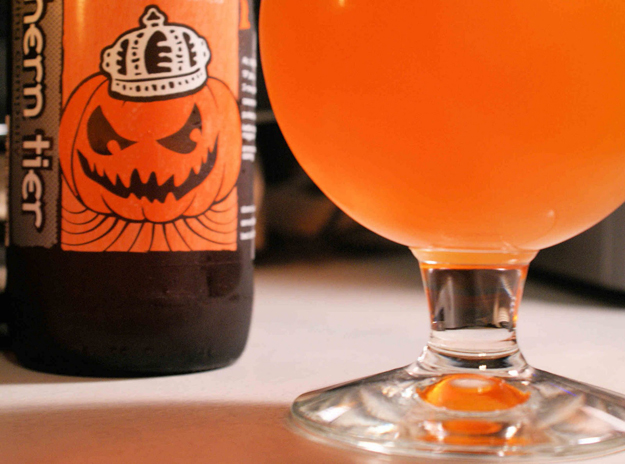 I do not have a marketing degree. I figured that between B.A.s in English and Theater, I had enough majors in fields without solid job prospects. But I do know a thing or two about getting people to buy stuff, and I can tell you one thing: if you make something available once a year and only once a year, people will go nuts for it.

Haunted houses. Marshmallow peeps. Shamrock shakes. If these and any number of other seasonal delights were available year-round, they’d barely be worth a second thought. But limit the supply, and suddenly people will track them down in a crowdsourced, tweet-fueled frenzy. Get to the car, they’ll say. McDonald’s partially gelatinated, non-dairy, gum-based beverages? They’re GREEN today. Let’s roll.

So the month of October inevitably brings with it two beer varieties that send cases flying out of the distributors: Oktoberfest brews and the omnipresent pumpkin-flavored beers. While Oktoberfest batches can sometimes be found year-round (or at least from August to January) the pumpkin beers are usually only available for about a six-week window around Halloween, and in very limited quantities. This makes the very presence of a particular brew an event, particularly if that brew is Southern Tier’s fawned-over Pumking.

I’ve tried a great number of pumpkin brews this season, and liked nearly all of them; some favorites are the very balanced Screaming Pumpkin Spiced Ale from Michigan Brewing, Smuttynose Pumpkin Ale and Weyerbacher Imperial Pumpkin Ale. Really, though, there aren’t too many bad examples from this seasonal subset; anything with “pumpkin” in the title is likely to scratch the itch.

If you’re looking for a one-bar tasting, though, get to the always-excellent Harris Grill. They’re still sporting a quartet of pumpkin choices: the aforementioned from Weyerbacher, Brooklyn Post Road Pumpkin, Southampton Pumpkin and Sixpoint Autumnation. And if you visit the Harris’ sister establishment, the Shiloh Grill, on Halloween—where you might run into the ghost of Mrs. Soffel—you’ve got a shot at the last keg of Southern Tier Pumking.

Meanwhile, in North Park, the Remi Savioz Glut1 Foundation will be throwing an event they’re calling the Boo and Brew Fundraiser, allowing you to grab a few seasonal sips while helping a worthy cause. The organization is dedicated to research into Glut-1 DS, an ultra-rare neurological disorder; Remi is a 13-year-old from Franklin Park and one of only a few hundred worldwide that suffer from the disease. Your ticket will support the foundation, one of the four—yes, just four—in the country that raise funds for Glut-1 DS research; in exchange for your charity, you’ll pull in quite the fall feast.

Among the beers up for tasting: Black Strap Stout, Woodchuck Ale, Thunder Hop IPA and Dogfish Head’s 60-Minute IPA. Grub will include New Orleans Crawfish, snacks from Vermont’s Cabot Creamery and more. A silent auction boasts an impressive array of swag, including autographed memorabilia from Mario Lemieux, Eric Clapton, Sylvester Stallone, Christopher Reeve and Paul McCartney (an autographed Fender guitar!); prizes from Bocktown will be handed out to the winners of a costume contest.

There are a variety of ticket rates available, but give generously—and if you bring a bag of groceries for the Squirrel Hill Food Pantry, there’s an extra beer in it for you.

Finally, a quick note on the under-appreciated also-ran of the pumpkin beer ranks, Blue Moon’s Harvest Moon. The Blue Moon variety appeared nationwide before the movement really started to peak, and there’s been a bit of backlash against that brewery for being something of a faux craft beer. I’ve always had a soft spot for them, though, and if you want a delicious treat that all your hipster friends will miss out on, head to Carson City Saloon and ask for a Harvest Moon. They do a cinnamon thing on the rim and in the foam, and it’s glorious.