When Khrushchev Came to Town

Find out what the Soviet leader had to say about Pittsburgh when he visited in autumn 1959. 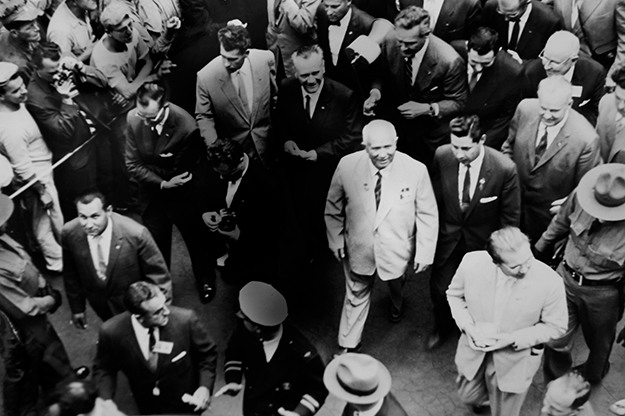 In autumn 1959, with the Cold War raging, Soviet leader Nikita Khrushchev took a whirlwind tour of the United States. He visited the White House, New York City, Hollywood, San Francisco, a farm in Iowa — and then he came to Pittsburgh to meet some real American workers.

When he landed at Greater Pittsburgh Airport around 11 p.m. on Sept. 23, Mayor Thomas Gallagher presented him with the only key to a city that he received in America. “Khrush” (as the Pittsburgh Sun-Telegraph nicknamed him) didn’t experience the Fort Pitt Tunnel-entrance effect because the tunnels weren’t yet finished — but Khrushchev was taken to Mount Washington so that he could see the city lit up to welcome him. At the Carlton House Hotel downtown, thousands of people greeted him.  While some protested Soviet policies, most Pittsburghers seemed honored by the high-profile visit.

The next day, Khrushchev made a mid-morning visit to Mesta Machine’s West Homestead plant, where he talked with steelworkers and women in the cafeteria. Around 11:30 a.m., he hopped in a convertible for a quick tour of the city. Pittsburghers of all ages lined the streets of his route, which was printed in newspapers — information that would never be shared today. His motorcade eventually headed up Bigelow Boulevard from downtown to the Pitt Student Union, where he gave a speech to hundreds of luncheon guests.

One newspaper reported Khrushchev was “in the jauntiest mood of his entire American tour.” He later called Pittsburgh “the friendliest of all cities.” In U.S.S.R magazine, Khrushchev wrote, “The impression that Pittsburgh and its people made on me is wonderful.”

This article appears in the October 2012 issue of Pittsburgh Magazine.
Categories: Rick Sebak