When Collapse Called, the Pirates Hung Up

Through hardships and setbacks, the Pirates transformed from boys to men. 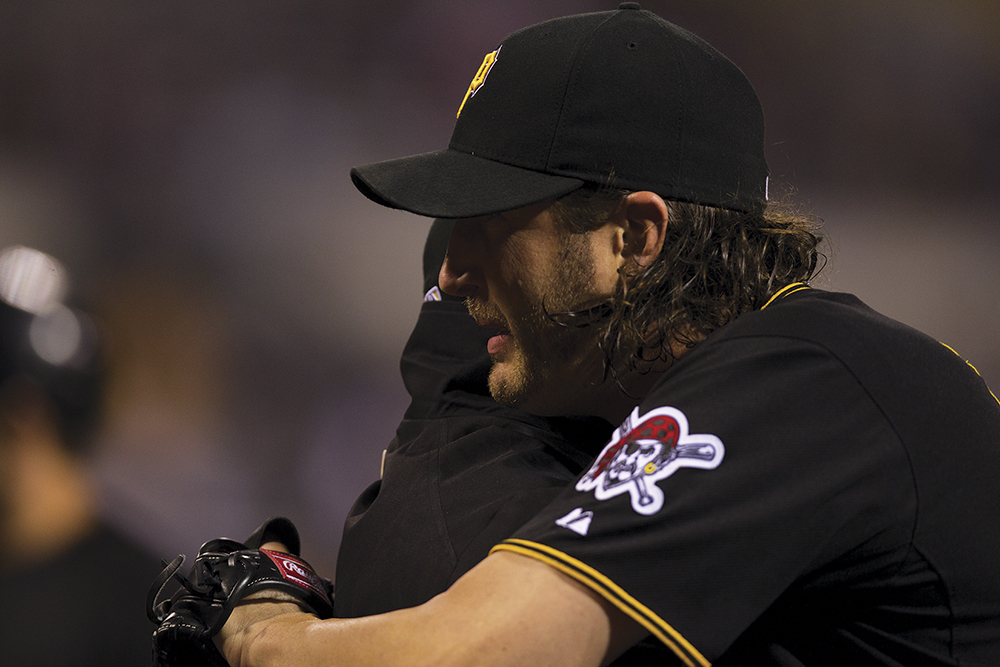 The fates had teased, then tossed them aside in the heat of the previous two summers and, in late July, they were again piling on the Pittsburgh Pirates. In both 2011 and 2012, the Buccos had been on their way out of the wilderness before falling and, unable to get back up, spiraling back into oblivion. The onsets of the collapses were not murky. Both were easily pinpointed.

And now, at about the same point of another thrust at elusive honor, of another courtship of Pittsburgh fans' trust and love, the Pirates were taking another kick in the gut. Jason Grilli, the personification of the entire team as someone who worked his way from the premature end of his career to the back end of the Bucs bullpen, took the mound July 22 in Nationals Park to add to his Major League-leading saves total. The 36-year-old right-hander took on both the Washington Nationals and the notorious jinx of Sports Illustrated, which had just hit newsstands with Grilli's flowing black locks on the cover.

Thirty times, Grilli had left the mound after out No. 27, holding catcher Russell Martin in a celebratory embrace, grinning. This time, he departed prematurely, holding his pain-wracked right elbow, grimacing.

The tick-tick-tick of another Pirates implosion had begun. Two years ago, they had dropped 42 of their final 61 games after losing a 19-inning marathon in Atlanta. In 2012, they had lost 29 of the final 41 after winning in 19 in St. Louis. Avoid any 19-inning games, manager Clint Hurdle figured, and we're safe.

The Bucs won that night — Vin Mazzaro entered the breach for the only save of his 123-game big league career — but the clubhouse stereo remained muted. The only rhythm came from fists pounding metal lockers.

Andrew McCutchen belongs to the hitters' clique. He and the team's pitchers usually live in different clubhouse neighborhoods. In PNC Park, McCutchen and Grilli locker on opposite sides of the home cave. For some reason, however, they were assigned adjacent lockers in Nationals Park's visiting clubhouse. While McCutchen talked about his pair of home runs that keyed the victory, Grilli sat burrowed halfway into his locker, a towel wrapped around his right forearm, his chin resting on his chest.

"Praying everything is all right," McCutchen said.

After the reporters departed, McCutchen walked around to Grilli, draped an arm around his shoulders and whispered in his ear. McCutchen's message was unclear, but it must have been something on the order of, "You'll be all right. And we've got this, Cheese — this is the new day."

When Collapse III calls, the Pirates hang up. Steeled by the experiences of the prior two years from tentative kids into resolute men, they delivered on McCutchen's private sermon. Mark Melancon, a one-time closer squirreled away for just such an occasion, stepped out of the setup shadows to assume Grilli's job. The Pirates fired off 13 wins in their next 18 games, staying their postseason course.

It was merely the latest, most convincing example of what Hurdle called the team's "Next-man-up mentality."

"Guys come in, and they don't want to be the weakest link," Hurdle elaborated. "They don't want to drop the ball, or let the bar — which has been set high — fall. You see it in all great organizations."

The Pirates? Great? How did they get from a North American sports record 20 straight losing seasons — even Rip Van Winkle slept for only 20 years, and it made him legend — to this? Physical talent was only part of it, perhaps a small part. In the everyday world of Major League Baseball, mental momentum is your rudder, and the '13 Bucs pulled each other through every rough spot with a collective mindset.

The first lifeline had to be cast early. They had tripped leaving the gate, five losses in the first six games a cursed outset for a team trying to erase the memory of the '12 fade. The Pirates were flat and feeble as they pulled into Phoenix for the beginning of another series.

McCutchen sat in his chair in Chase Field's visiting clubhouse, surveying the glum teammates around him. At 2:54 p.m. Mountain Time, he snapped up his phone and tweeted, "I'm bringing the 'Z' back . . . stay tuned."

The hand-gestured "Z," for the Zoltan character from "Dude, Where's My Car?" fame, had been the 2012 Pirates' trademark until it faded out of style, along with the team. McCutchen felt strongly it could now be the answer to "Dude, Where's My Karma?"

Before April ran out, the Pirates pushed their record over .500, noteworthy for a team that had lived below that line for a generation. But they still didn't know how good, how legitimate they were. They needed a challenge; they needed someone to call them out.

At the end of May, the Detroit Tigers came calling. The defending American League champions, the Miguel Cabrera-Prince Fielder crew that was leading the Majors in scoring. Pitchers get sore arms just looking at the Tigers lineup.

After dropping a tightly contested first game, the Pirates took the next three. Not only that, but Pittsburgh pitching — 10 different arms contributed — held Detroit scoreless in 30 of 31 innings. Two of the wins were identical 1-0 victories in 11 innings. In the four games, Cabrera and Fielder combined to drive in two runs — and strike out nine times.

"We've got a lot of season in front of us," Hurdle proclaimed proudly, "but these are markers along the way that you like."

The venue for that series switched from Detroit to Pittsburgh after the first two games. The Pirates were welcomed home by a 150-gallon aquarium in the middle of their PNC Park clubhouse.

At the most appropriate time, considering relief pitchers were in the midst of throttling the Tigers, the Shark Tank persona of the Bucs bullpen had gone from concept and some T-shirts to an actual tank of miniature sharks, thanks to attentive Pirates fan Gary Knabe, owner of Elmer's Aquarium and Pet Center in Monroeville.

Grilli generically described the sharks within the tank as "predatory creatures" that “just lie there dormant, until feeding time. Just like the bullpen."

The Shark Tank gave the Bucs an identity. And the Bucs gave Pittsburgh something with which to identify: Gritty, resilient, cohesive, work hard, party harder.

Tom Singer has covered Major League Baseball since 1973, the last 13 years for MLB.com, which he served as a national columnist until taking on the Pirates beat in 2012. That offered a homecoming opportunity for the 1967 graduate of Taylor Allderdice High School. He can be reached by email at tom.singer@mlb.com and followed on Twitter @Tom_Singer.