Wheels of Change: Meet the Man Behind Bike Pittsburgh

Scott Bricker and Bike Pittsburgh are on a mission to make city streets convenient for humans — not just cars. 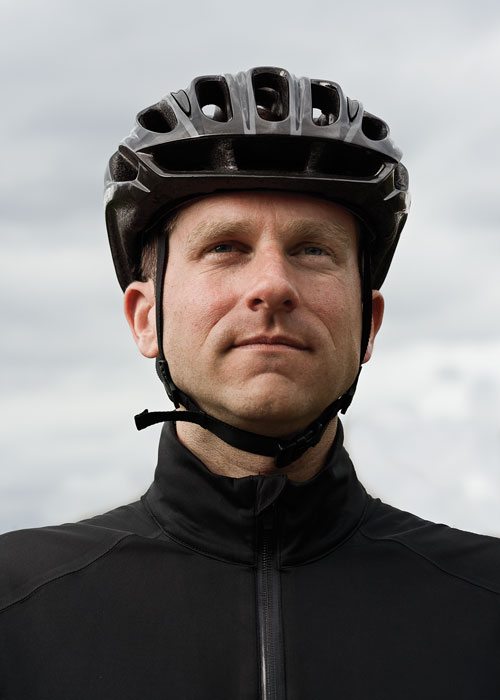 Look at all of these spaces!” Scott Bricker shouts, whirring along in the bike lane on Bigelow Boulevard in Oakland and pointing at a dozen empty parking spots. It’s mid-morning on a Monday and he’s just a block away from the University of Pittsburgh campus, but the spots sit empty. “And they wanted to keep even more spaces than this when we put the bike lane in!”

Wherever you find bike infrastructure in Pittsburgh, you’ll find the tire treads of Bricker, executive director of Bike Pittsburgh. The nonprofit organization, which advocates for improving bike and pedestrian infrastructure, was founded in 2002 by bicyclists who were tired of being harassed by city drivers. Bricker, who had recently returned to Pittsburgh after two years in San Francisco, got involved. “It was as toxic as an environment here as I could imagine,” Bricker says. “It felt dangerous.”

Pittsburgh then was considered to be one of the worst cities for bicycling in America: no bike racks, no bike lanes on city streets, no shared-lane bike markings. The handful of bike lanes that did exist wound through parks — Frick, Highland and Riverview — a clear sign the city believed bikes were meant for recreation, not commuting.

Bike Pittsburgh and Bricker charted a plan to build and advocate for new infrastructure from scratch. In 2004, they won a grant to install bike racks around the city, and in 2007, city leaders agreed to paint bike lanes on Liberty Avenue in Bloomfield and on the Birmingham Bridge.

The 2013 election of Mayor Bill Peduto kicked their movement into a higher gear. In 2014, the city created the popular Open Streets program, which first shut down Butler Street and Penn Avenue to cars on a few summer Sundays so people could walk and bike; also that year, the first protected bike lane appeared on Penn Avenue, Downtown. In spring 2015, the long-awaited Healthy Ride bike share program launched.

Not that there haven’t been problems. Today, Pittsburgh has only 2.6 miles of protected bikeways and 40.7 miles of separate lanes, and it’s still updating its 1999 bike plan. In some cities, bike communities have been criticized for focusing on wealthier, white neighborhoods at the expense of poorer minority neighborhoods — an issue Bricker wants to address by ensuring all bikers’ voices are represented here. “It’s a huge concern of ours,” he says. “We have to tell their story. We have to do a better job.”

The city, which in April announced plans to overhaul the Fifth/Forbes corridor to improve bus lanes and smooth traffic, undoubtedly will hear from the 2,500 members of Bike Pittsburgh.

“It’s always controversial when you are talking about potentially carving out a traffic lane or on-street parking and putting in a bike lane,” Bricker says. “But we believe that people should come first when it comes to the streets.”

This article appears in the June 2016 issue of Pittsburgh Magazine.
Categories: Community Feature