What's Wrong with the Fountain at the Point?

The iconic fountain is undergoing repairs after a particularly tough flood season. 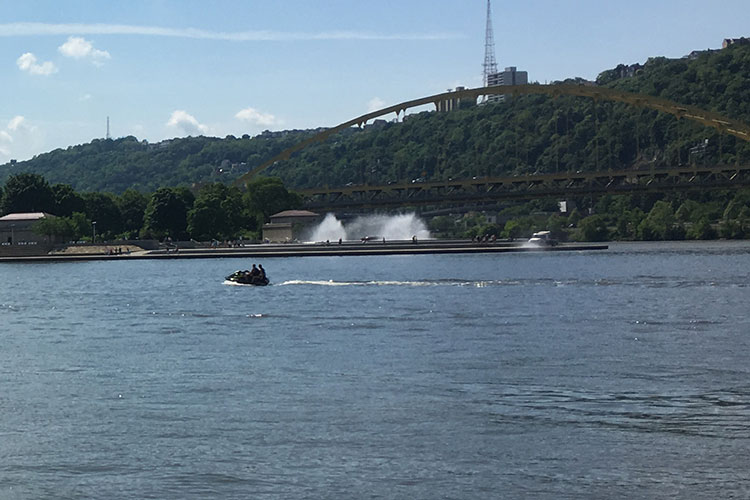 If you’ve stopped by the Three Rivers Arts Festival in the past few days, you may have noticed that the Point State Park fountain is looking a bit … shorter … than usual.

That’s because the fountain’s 150-foot-tall center plume shut down, only about a month after it started up again for the summer.

Point State Park is a National Historic Landmark located where the Allegheny and Monongahela meet to form the Ohio river. Its large fountain has been the first thing many people entering the city see since it opened in 1974. Tourists are out of luck if it’s wintertime, though — the fountain only operates during the summer and fall.

Other parts of the fountain are still working — the waterfall feature and three shorter decorative water sprays are still running, according to the Pittsburgh Post-Gazette. And the plaza is still open to hikers, bikers and other visitors looking to dip their toes in the water or relax by the riverside.

But several floodings from earlier in the year affected three of the fountain’s pump lines, according to the Pittsburgh Tribune-Review, meaning that workers need to rebuild them before the center plume is up and running again. State park officials are unsure when the fountain will again be fully operational.

Point State Park was covered by flood waters four times in the winter and spring of 2018, leaving ice, mud and debris behind. The fountain plaza was closed during these times, along with the lower wharves and public restrooms.

This is not the first time the fountain has undergone construction — it was updated only five years ago. Riverlife began a campaign to renovate the Pittsburgh landmark in 2009 since its fountain pumps began to fail in the early 2000s. After a series of renovations costing about $10 million, the new fountain was unveiled at the 2013 Three Rivers Arts Festival. The renovated version is ADA-accessible and includes a reflecting pool, seating ring and LED lighting.