What’s The Skinny on the World’s Skinniest Commercial Building?

The future and preservation of this Pittsburgh icon is secure, thanks to a pending sale to PNC Bank. 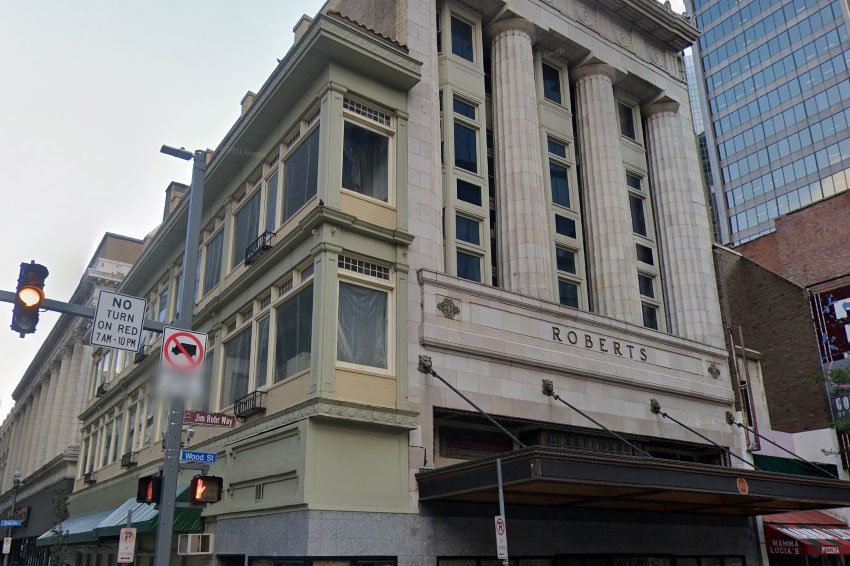 Shoehorned into an impossibly narrow lot at the corner of Forbes Avenue and Wood Street is one of Pittsburgh’s oddest urban curiosities.

The Skinny Building, a vacant storefront PNC Bank is purchasing for $1.3 million, along with the larger Roberts Building behind it, from the Urban Redevelopment Authority, is 80 feet long but just 5 feet, 2 inches wide, making it arguably the world’s narrowest commercial building. (A shop in Vancouver, British Columbia, contests the claim with a footprint just 4-feet, 11-inches deep, but that building’s second floor bulges to 6 feet.)

In any case, the bizarre proportions of the Skinny Building are only part of its historic importance. Shortly after it opened in 1926, its upper two floors housed the Lincoln Restaurant, whose cramped tables for two were the sole place Downtown where Black patrons were permitted to sit down for dinner. The building’s original owner, Louis Hendel, was an early Civil Rights pioneer and a leader in the city’s Jewish community. 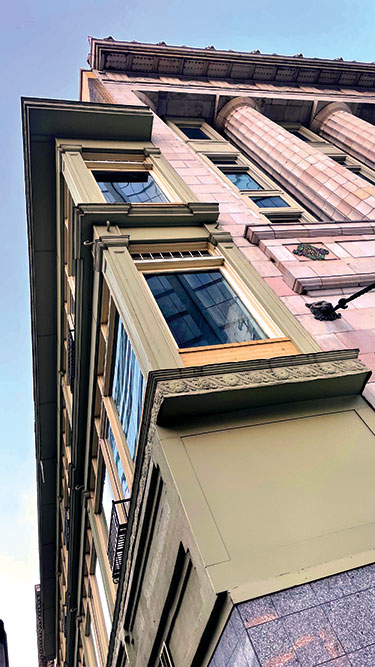 “Pittsburgh’s iconic Skinny Building holds an important place in our city’s architectural history, and in the history of Black people in our city. That is a history that deserves to be protected and remembered,” says Pittsburgh Mayor Ed Gainey.

Gainey joined the board of the URA in 2014, a year after the city agency purchased the Skinny and Roberts buildings to spare them from possible future demolition. Working with the Pittsburgh History & Landmarks Foundation, the URA spent almost half a million dollars renovating the exteriors of the two buildings as part of a larger neighborhood beautification effort.

Last year, PNC stealthily made offers to acquire each of the buildings on the block of Wood Street facing its new headquarters. When news broke of the Skinny Building’s pending sale, it stirred up concerns about the strange structure’s fate. The URA received more public comments about the Skinny Building’s sale — nearly 60 — than for any other of its agenda items in more than a year.

So Gainey and the URA board placed conditions on the sale. PNC, which declined to comment on the sale while it is still not finalized, has pledged to work with the local preservation group to maintain the facades and ensure any proposed interior modifications meet with the PHLF and URA’s approval. The bank plans to convert the Roberts Building into flexible office space and will use the Skinny Building’s upper two floors solely to display art in the windows, a purpose they have been used for in the past.

“What is essentially an impractical building was once practical in the history of our city, and we have celebrated it as such,” says PHLF spokesman Karamagi Rujumba. “It’s really a credit that PNC wants to acquire, renovate and use it while celebrating the history of what makes it a distinctive piece of architecture.”

The Skinny Building was originally the solution to a problem for Hendel, a Jewish immigrant from central Europe who first settled in Buffalo, New York, before moving to Pittsburgh after the turn of the century.

A greengrocer in the bustling Diamond Market, now Market Square, Hendel lived in the Hill District, then a melting pot of immigrant and Black families. His success led him to be chosen as the president of the Oher Chodosh or New Light Synagogue on Roberts Street. At the end of his four-year term in 1916, the congregation presented Hendel with a silver loving cup and praised him for eliminating half their debt.

Two years later, Hendel bought the toothpick-shaped lot along Forbes, then still called Diamond Street, from Andrew Mellon. It was the leftover fragment of a standard parcel that had been almost completely consumed by a street-widening project. Hendel had a large fruit stand on the property, as well as a lunch counter and cigar stand. His business drew enough customers that shoppers and pedestrians sometimes spilled out into the road.

City officials took Hendel to court to stop him from obstructing the sidewalk. The legal battle dragged on until 1926, when Hendel found a way around the rules against sidewalk vending: He had an architect design a three-story brick and steel structure to replace his fruit stand, and it won city approval.

Hendel’s gambit enraged rival businessman John Donahoe, who had opened a large grocery store next door (decorative Ds still can be seen on its terra cotta façade). The day after Hendel got permission to build, Donahoe, president of a group calling itself the Diamond Street Sidewalks Association, took out a large ad in The Pittsburgh Press attacking Hendel. “Is this man higher than the law?” its headline roared. 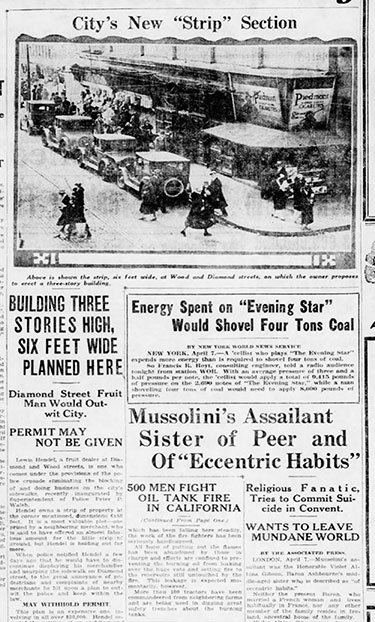 Construction proceeded nevertheless, and soon the shallow shopfront was open for business. A canopy over its entrance proudly proclaimed it the Hendel Building. The namesake owner used part of the ground floor for produce sales and leased the corner space on Wood Street to a jewelry merchant. That undoubtedly annoyed the owners of the four-story Roberts Building that Hendel’s structure was plastered up against, which was then the brand-new showroom and offices of the Roberts & Son family jewelry business, which by then had been operating in the city for almost a century.

Hendel clearly was not a man who shied away from confrontation. In 1928, the year he invited Black restaurant manager Clarence Jefferson to open the Lincoln as Downtown’s sole unsegregated sit-down dining establishment, his Hendel Theater Enterprises was in the process of constructing the first cinema in Pittsburgh where Black patrons would not be restricted to balcony seating.

The Pittsburgh Courier, the city’s Black newspaper, lauded Hendel as a “prominent friend” in a Nov. 10, 1928 article about the Lincoln Restaurant and his new Roosevelt Theater on Centre Avenue in the Hill. The story approvingly quoted Hendel as saying: “The Jew would be treated as the Negro if he had not had the money to make him independent as a race.”

Neither the Lincoln nor another Hendel-backed Downtown restaurant lasted long, probable casualties of the Great Depression. In 1930, Hendel and his wife, Sadie, moved to Miami Beach, where he briefly ran a hotel, then went back into groceries.

The following year, a Pittsburgh Post-Gazette columnist dismissively noted that the vacant upper floors of the Hendel Building had once housed an “Italian restaurant” that “drew a patronage composed chiefly of the curious.” No mention was made of its service to Black diners. The building’s ground floor eventually was turned into a grill called Raywell’s, and when that establishment’s owners posted a want ad in 1950 looking to hire counter men, they specified only two qualifications: experienced and white.

Hendel’s sons took over his Pittsburgh produce businesses, while his younger brother and business partner, Harry, focused on managing the Roosevelt and the other local theaters he and Louis owned. Harry next bought the Pythian Temple — designed by Pittsburgh’s first Black architect, Louis Bellinger — on Centre Avenue in the Hill and turned it into the New Granada Theater. Its upstairs ballroom was relaunched as the New Savoy, booking top Big Band-era acts including Ella Fitzgerald and Cab Calloway.

Harry made enemies just as Louis had. Government censors shut down the Roosevelt’s premiere of a film, “The Exile,” which controversially showed an interracial kissing scene, according to a June 6, 1931 Courier story. Some rivals tried to ruin his reputation by distributing fraudulent handbills falsely claiming the Roosevelt had decided to reverse its policy and restrict Black guests to the balcony.

But Harry, born and raised in a Buffalo ghetto, was not to be deterred. In 1939, he refurbished and opened offices on the upper three floors of the New Granada Theater to a neighborhood program for underprivileged youths. By 1942, the Hill City program was serving 2,600 young people, and Hendel was its public champion for the two decades it existed, encouraging friends and acquaintances to see it for themselves and bring their checkbooks.

The Courier lionized Harry Hendel as it had his older brother. “Harry Hendel likes Negroes, not because they are Negroes, but because he can realize their worth and their intelligence,” one 1934 profile concluded. 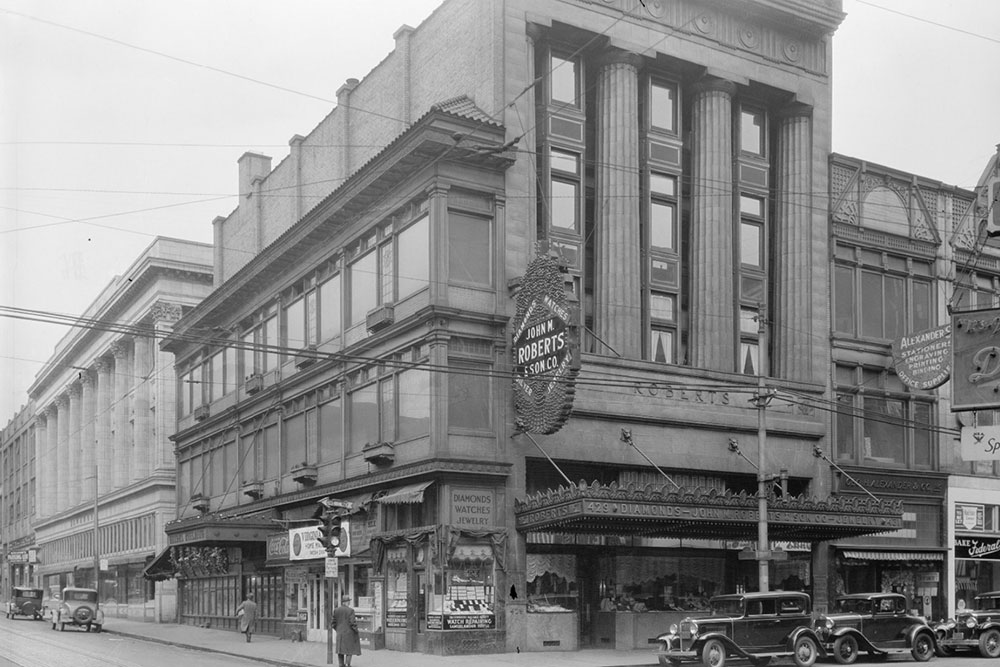 LOUIS HENDEL BUILT THE SKINNY BUILDING IN 1926 FOR HIS FRUIT STAND AND OTHER SMALL BUSINESSES, INCLUDING, FOR A TIME, DOWNTOWN’S SOLE UNSEGREGATED SIT-DOWN RESTAURANT, THE LINCOLN | PHOTO COURTESY MARK HOUSER

The Hendel brothers are buried in Beth Shalom Cemetery in Shaler. Many of their old theaters, including the Roosevelt, are gone, as is their former synagogue on Roberts Street. But the New Granada is today the centerpiece of a major development project in the Hill District. And now the Skinny Building’s future is secure.

Eric Lidji, director of the Rauh Jewish Program and Archives at the Heinz History Center, says the lives of Louis and Harry Hendel are worthy of further research and study. Their experiences hold insights about how immigrant entrepreneurs forged a place for themselves in a new society and how they and other minorities saw each other, he says. Lidji hopes the Skinny Building’s story will be further explored and shared.

“People who fall in love with Pittsburgh fall in love with it because around every corner there seems to be an oddity that is almost incomprehensible, like the Skinny Building,” Lidji says. “The fact that it’s there Downtown and you can walk past it a million times before you know its significance, that’s the spirit of Pittsburgh to me.”

Mark Houser is the author of “MultiStories: 55 Antique Skyscrapers & the Business Tycoons Who Built Them.”

This article appears in the March 2022 issue of Pittsburgh Magazine.
Categories: Community Feature, From the Magazine, Hot Reads