Fred Rogers had a special power. He informed our childhoods and could return us to them with a simple hello. 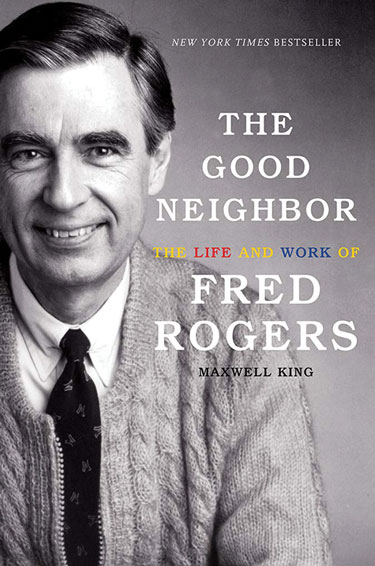 The Good Neighbor: The Life and Work of Fred Rogers
by Maxwell King
Abrams Press, $30

If you are anything like me and nearly everyone else in the packed movie theater where I saw last year’s outstanding documentary about Mr. Rogers, “Won’t You Be My Neighbor?”, then you spent that hour and a half openly weeping.

Confronted by so much human decency on the big screen in 2018 was a shock to the system. The tears welled in my eyes seeing Fred Rogers sing a song with Officer Clemmons while cooling their feet together on a hot day. The dam burst watching him with the wheelchair-bound Jeff Erlanger.

Standing outside the Manor Theatre on Murray Avenue after the film was over, I had to ask myself: In the daily barrage of news that had been coming out of the White House since the election of Donald Trump, had I actually forgotten what kindness and respect looked like?

In his excellent biography of Fred Rogers, Pittsburgh Foundation CEO (and former director of the Fred Rogers Center) Maxwell King observes, “In our era, the geographical concept of the neighborhood in the United States is vastly diminished.”

He goes on to write, “So where do we find the strength of neighborhood today, in a world of dramatic globalization, an environment of rapid technological change, a planet increasingly consumed with fear of the other? So many people are overwhelmed today with the relentless pace of change, and a sense of their being left behind, that anger, resentment, misogyny, and blame are driving the public discourse.”

“The Good Neighbor: The Life and Work of Fred Rogers” is richly detailed and keenly observed in its telling of Rogers’ life story. As King notes, it’s the story of “a difficult childhood; a quest to escape feelings of isolation engendered by his parents’ protectiveness, and by their great wealth; a struggle to remake himself in a mold of his own choosing; and after he found his vocation, a lifelong drive to meet the highest standards he could discover.” It’s the tale of a shy and lonely boy with a knack for puppeteering and music who went on to positively affect the lives of millions of children.

When I was in my 20s I worked at a bookshop where Fred Rogers was a regular customer. During my time at the shop, I had the good fortune to meet many famous writers. Being young and callow, I didn’t appreciate this as the great gift it was; I gave off a studiously unimpressed air. But whenever I would pick up the phone and hear Rogers’ unmistakable voice on the other end, I was immediately reduced to a wide-eyed little boy, every single time. Fred Rogers had a special power. He informed our childhoods and could return us to them with a simple hello.

Watching that film, and now having read King’s biography, I realize just how much I miss Fred Rogers. King distills Rogers’ message to a simple aphorism: “Human kindness will always make life better.” “The Good Neighbor: The Life and Work of Fred Rogers” shows us just how much work a life lived by that principle requires.