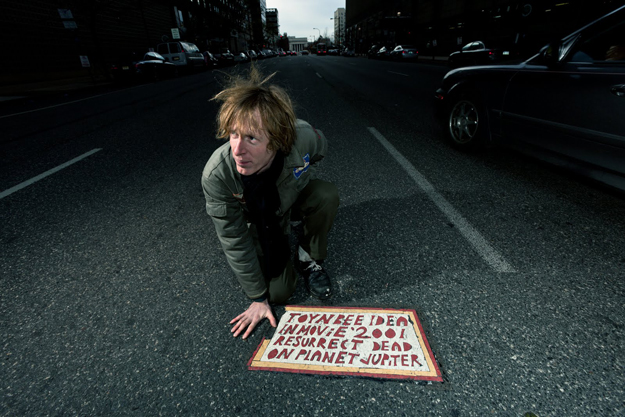 There are plenty of Pittsburghers who are unaware of the Three Rivers Film Festival, the yearly celebration from Pittsburgh Filmmakers, and that’s a shame. While Pittsburgh may not be a magnet for world premieres and celebrity drop-ins, we do have the essential part of a film festival: a boatload of fascinating, diverse movies. From already-acclaimed prestige pics like David Cronenberg’s A Dangerous Method and Lars von Trier’s Meloncholia to a slate of illuminating documentaries to an evocative sampling of world cinema to refreshing efforts from local filmmakers (including long-lost local horror gem Effects, with gore from Tom Savini,) there’s simply too much to see, as always.

To that end, After Dark was fortunate enough to get sneak previews of some of the fest’s features, including two of the three opening night films. Tickets for opening night include your choice of films—the two documentaries discussed below or the aforementioned A Dangerous Method—along with admission to the opening night party at Pittsburgh Filmmakers (477 Melwood Ave, Oakland; head over after your film lets out.) That celebration doubles as a 30th birthday party for the festival and 40th for Filmmakers itself; food and drinks will be bountiful, as will music from local notables Colonizing the Cosmos.

Resurrect Dead: The Mystery of the Toynbee Tiles
I mentioned this film in October’s "Bizarre Pittsburgh" feature on the weird side of our city, and with good cause. Resurrect Dead traces the enduing mystery of the outsider artwork known as the Toynbee Tiles, a series of bizarre proclamations embedded in pavement all over the eastern US. Most of the tiles contain a variation on this message: “TOYNBEE IDEA IN KUBRICK’S 2001 RESURRECT DEAD ON PLANET JUPITER”. Obviously, questions abound, beginning with: What? What does that mean? Who’s responsible for this? How were they surreptitiously planted all over major cities (dozens concentrated around Philadelphia, but a quartet right here in Pittsburgh)?

Director Jon Foy, who will present his film in person, launches the most thorough investigation of this phenomenon ever undertaken, unearthing leads that get more and more surprising as the film progresses. Part mystery, part history and part art appreciation, it’s an utterly unique documentary that makes artful and resonant use of its bizarre subject. The opportunity to further grill Foy about his conclusions (and, more or less, he does believe he’s solved the mystery) makes Resurrect Dead all the more enticing a choice for the festival’s launch.

Farmageddon
I can’t be as enthusiastic about this documentary by Kristin Canty, who will also present her film in person. Farmageddon explores the difficulties faced by small farmers attempting to keep up with government regulations designed for much larger companies, and has a few salient points to make: first, that groups like the USDA are often bewilderingly serious about relatively minor issues (like private sales of raw milk, a repeatedly visited theme,) and second, that conditions on small farms are almost always better than those in factory farms. That second point has been made ad nauseum over the past twenty years or so, though; the first is victim to a great deal of scatterbrained rambling and misguided focus that weighs the film down.

Canty herself, in narration, and many of the interview subjects, are fond of scientifically bankrupt statements extolling the virtues of this-or-that “natural” approach, and are alarmingly anti-science and conspiratorial at times. Canty even claims that drinking raw milk has been “scientifically proven” to be healthier than pasteurized milk, an assertion that’s both untrue and potentially dangerous (so much so that a disclaimer is buried after the credits, stating that Canty didn’t really mean that raw milk is better for you). Besides all that, the film isn’t that interesting. Either Resurrect Dead or A Dangerous Method are worthy of your time; see one of those, and don’t bother with Farmageddon.

The Salt of Life (Gianni e le donne)
Moving further into the festival proper, a number of interesting and worthy foreign entrants start to emerge. The Salt of Life, by Italian writer/director/star Gianni di Gregorio (known for last year’s Mid-August Lunch,) is chiefly concerned with a fact that Silvio Berlusconi has made clear in recent months: old Italian men are absolutely, positively obsessed with sex.

Gianni has been forced into retirement at 50, and his wife is only vaguely aware of his presence. When an older friend encourages him to take a young lover, he sets out on a half-hearted quest for love (or something like it.) Gianni is the picture of frustration (“It’s like I’m transparent,” he says, in one of the film’s rare expository moments) and his sad-sack expression through his failed attempts at flirtation is the movie’s bread and butter. Ultimately, The Salt of Life is unremarkable, but airy and pleasant; it’s not one of the festival’s must-see films, but you won’t regret watching it.

Sidewalls (Medianeras)
This wandering Argentinian comedy instantly recalls the French film Amelie, only if all the characters in that film were neurotic, depressed and paranoid. Petrified web designer Martin takes photographs to overcome crippling social anxiety; moody architect Mariana decorates department store windows for both income and artistic expression. They live in neighboring buildings in downtown Buenos Aires, and they—like the film—are obsessed with technology, cities, structure and emotion, in frequently alternating order.

Obviously, the film moves inevitably toward the day when these two finally meet, but fortunately, the journey is pleasant. Artfully shot and meditative, director/writer Gustavo Taretto guides his story along creatively and cautiously, worrying about the aesthetics of his work and allowing the excellent leads, Pilar López de Ayala and Javier Drolas, handle the film’s emotional core. At it’s best, it feels like poetry; at it worst, it feels like a moody twentysomething’s Tumblr page (which is still worth looking at). The emotions are muddy and the pace is languid, but if that doesn’t bother you, it’s worth your time.