What Brought Walt Disney to Pittsburgh

A futuristic attraction at the Allegheny County Fair drew a curious Walt Disney to Pittsburgh — and had a lasting impact on modern transportation. 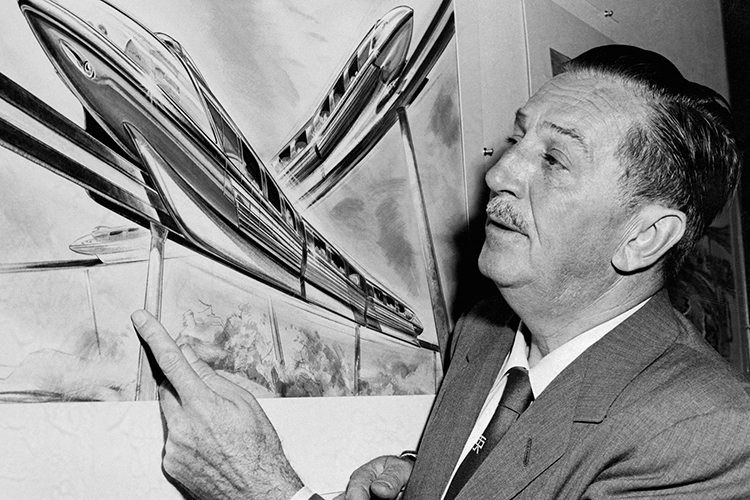 The 1965 Allegheny County Fair featured a new, experimental mass-transit system that came to be known as Skybus. The unusual vehicle attracted the attention of Walt Disney, who had an appreciation for futuristic technology; he had created Tomorrowland at his California theme park 10 years prior. In January 1966, Disney flew into Pittsburgh to examine Skybus.

The system ran on an elevated track about 2 miles long that traveled beside Corrigan Drive and made a loop through the South Park fairgrounds. It had three vehicles shaped like rectangular boxes that ran quietly on rubber tires — without the aid of an onboard driver! Skybus became a popular 10 cent “ride” from 1965 through 1971; some folks referred to it as a “people mover.”

Engineers at Westinghouse Electric designed Skybus and had it built. It was originally called the Westinghouse Transit Expressway. Walt Disney had worked with Westinghouse before, as early as the 1930s (he got the company to make some plastic toys for his expanding merchandising efforts). He already had a monorail of his own, however, installed in Tomorrowland in 1959 — so what did he hope to discover in Skybus?

At the time, Disney was considering plans for his park in Florida and was particularly interested in the driverless aspect of the Westinghouse vehicles. In 1966, the Skybus cars were controlled mechanically from a master control location, but robotic controls were in development.

When Disney flew to Pittsburgh on his company plane that January, he brought along seven associates — engineers, planners and builders, including the important designer Bob Gurr, who has written about the trip on MiceChat.com, an independent site devoted to Disney. He reports that Westinghouse engineers wowed the group with a “fabulous demonstration” of the work they were doing with then-very-new laser technology.

When the group was dropped off at their Downtown hotel (there’s no record of which it was, but the old Hilton at Gateway Center is a good guess), Disney wanted to get a cheeseburger at the lobby lunch counter. As he walked through the hotel gift shop, he noticed Disney merchandise was displayed on a bottom shelf. Naturally, he asked his colleagues to help him swap the company stuff with the items on the top shelf. A “perturbed sales lady” asked, “May I help you?”

Although Skybus stopped running in South Park in 1971 (and plans for a massive local expansion fell apart), the term “people mover” became standard and aspects of the technology lived on in Miami’s Metromover, San Francisco’s BART system and others. Westinghouse’s Transit Group underwent a series of mergers and sales and was called Adtranz North America until it was bought by the Canadian firm Bombardier in 2000.

One of the three Skybus vehicles was discovered and lovingly restored by Bombardier; the aluminum vehicle sits now in front of Bombardier’s West Mifflin offices on Lebanon Church Road.

No one knows if the restored car is the exact one that Walt Disney rode back in 1966.

This article appears in the March 2019 issue of Pittsburgh Magazine.
Categories: Rick Sebak