What Are the Big Upgrades Coming to PNC Park This Season?

From additional gathering spaces to historical mini-exhibits throughout the park, a lot is changing in 2022. 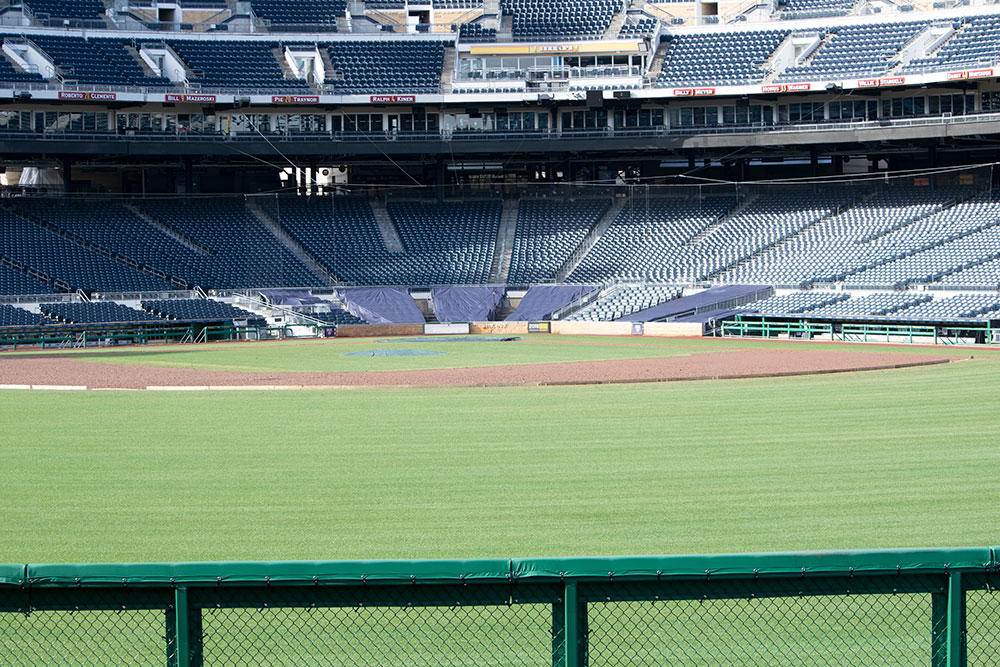 Just in time for the Pirates’ home opener next week, fans can expect to see some notable upgrades around PNC Park.

Park officials announced Monday what they called “significant enhancements to the fan experience.” Updates will mostly focus on providing more gathering spaces throughout the ballpark and include new social gathering spaces with views of the field, new concessions and other hospitality concepts, improvements to existing group spaces, new play areas for kids and other opportunities “for fans to interact with the team’s storied history.”

“As we work hard to build our team on the field, we are also focused on the continued evolution of the experience at PNC Park,” said Pirates Chairman Bob Nutting in a press release. “We need to ensure that PNC Park is a welcoming and fun place for every fan, build off what is best about PNC Park and improve the gameday experience to meet the changing needs of our fans.”

To carry out these changes, the Pirates have partnered with Janet Marie Smith, one of the world’s leading experts in ballpark design. Smith served as the lead designer in the creation of Camden Yards in Baltimore and has also spearheaded similar projects at some of the country’s most notable parks, including Fenway Park in Boston and Dodger Stadium in Los Angeles.

The goal, she said, was to emphasize the best things about the ballpark while also taking into account the way the experience has changed in recent years.

“Every improvement was designed to bring the fans closer to the game by removing walls, barriers, and even some seats to be sure that fans are enjoying the new spaces while being intimately connected to the field,” Smith said in a statement. “It was important to add something for every fan, including cool displays for baseball historians, play areas for kids, craft beer and new food concepts for friends to enjoy together.”

April will mark PNC Park’s 22nd season of play, and the stadium’s enhancements — which have been privately funded by the Pirates — will be unveiled when the team officially begins its season on April 12.

So what’s in store?

Come the home opener, fans can expect to see a new gathering space called the Bullpen, which will replace the former gameday security building above the center field bullpens. It will include two rows of drink rails, comfortable seating, televisions and more.

“Like all of the new spaces, The Bullpen offers a great view of the action on the field, so fans won’t miss a minute of the game while enjoying a craft beer on the riverwalk,” the press release says. 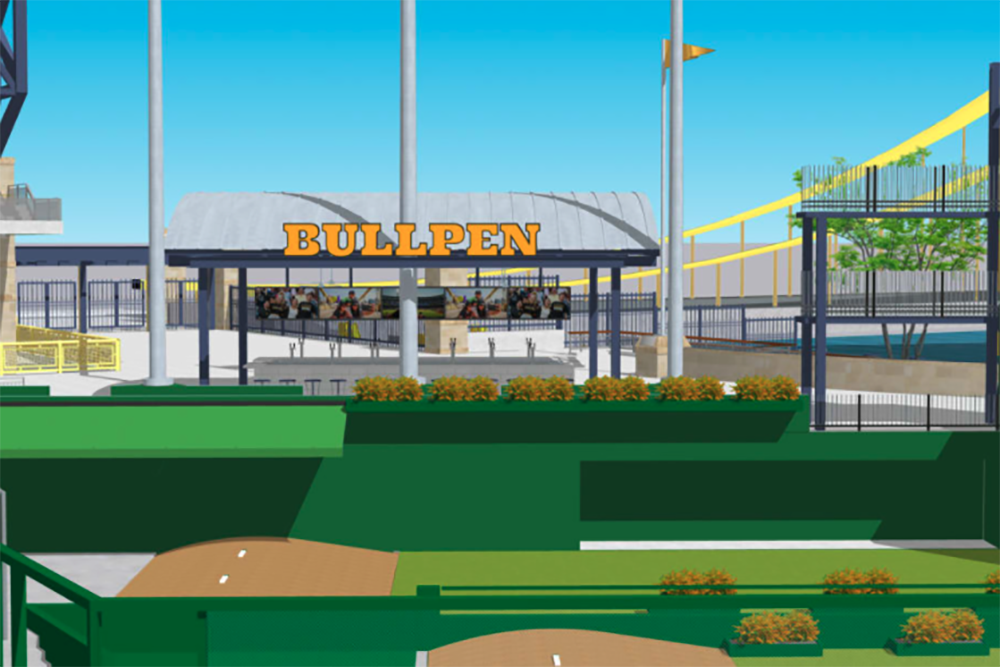 Another new space called the Landing, located just above the center field fence line, features views of both the field and the Downtown cityscape. It offers new drink rails, tables and high-top seating. Similarly, the Patio provides a newly widened and leveled area that extends from the bullpens to the Left Field Rotunda. Both the expansion of this area, located between the upper and lower bleacher seating areas in the left field, and the addition of new furniture will offer another public space with a view of the game.

The exterior of the Left Field Lounge will be renovated to create a single large, open platform with a picket-style drink rail running the length of the space. Groups will be able to move around more comfortably, and the new design will also improve sight lines of the field from within the space.

The Corner, located below the left-field rotunda, features specialty drinks, local craft beers and other fan-favorite Pittsburgh brews. It will get a facelift that includes additional TVs and furniture, as well as the removal of large corten steel panels to create a more open feel.

Picnic Park, which officials say has always been a popular spot to host groups, will now feature upgraded furnishings, enhanced lighting and landscaping and additional access points to improve its connection to other new enhancements along the riverwalk. 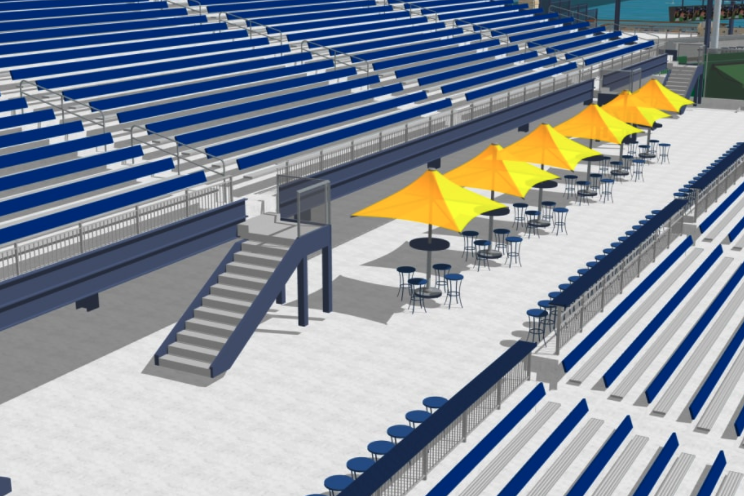 An Upgraded Play Space for Kids

This is a refreshed and expanded kids play area by right field. Newly expanded along the riverwalk into the center-field area, it now features life-sized bobbleheads, a Lucky Climber shaped like a pirate ship and an accessible kid’s play bridge inspired by the nearby Roberto Clemente Bridge. 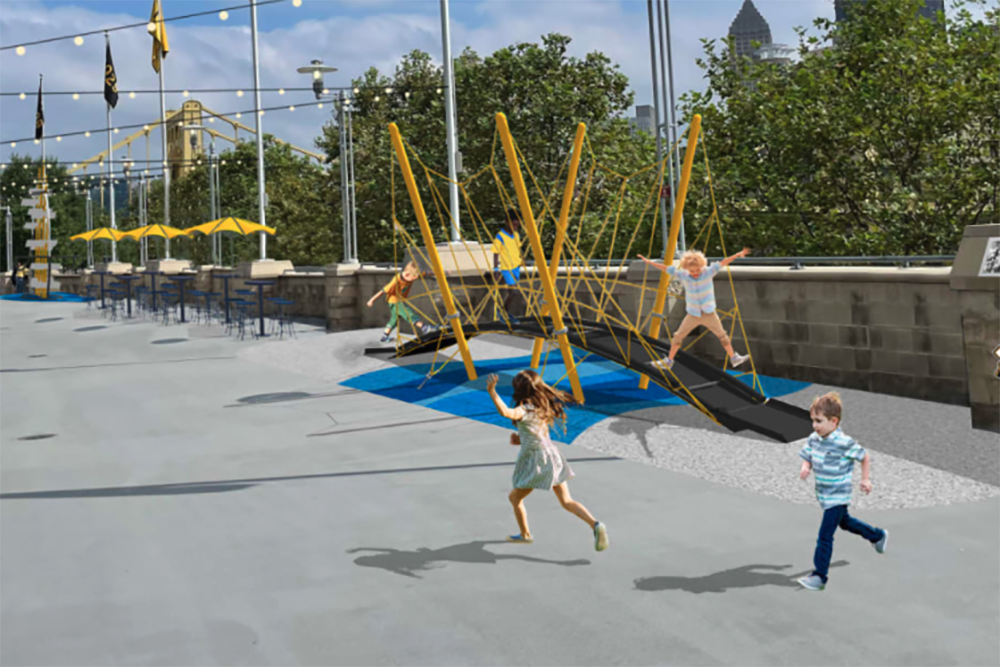 Local Pittsburgh chefs will create an array of new food concepts and specialty offerings, which will be featured throughout the riverwalk and in the arcade under the left field bleachers.

Finally, guests can experience the rich history of the Pirates and Pittsburgh baseball in general through new curated displays throughout the park. These displays will be unveiled throughout the season and will also include some aesthetic elements like retired numbers in the landscape and oversized baseballs placed along the entire span of the lower riverwalk.

The numbers will be inspired by the steel design of the nearby Three Sister bridges — The Roberto Clemente Bridge on Sixth Street, the Andy Warhol Bridge on Seventh Street and the Rachel Carson Bridge on Ninth Street.

For a full look at what changes are in store, check out the full gallery of images below.