Roger Goodell and the NFL owners are crying poverty and playing politics once again. 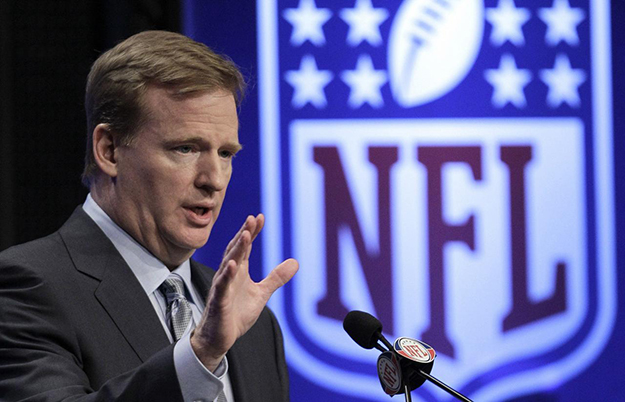 That is approximately how much money each NFL team will save, per year, if they continue to lock out the professional zebras and keep this ragtag band of bumbling replacement referees on the field.

That is how much it will cost the Tampa Bay Buccaneers to keep human tackling dummy Markus White on their practice squad this season.

It wouldn’t be the year 2012 if an issue of common sense wasn’t turned, twisted, spun, and twerked by a series of haughty press releases and comment section proxy-wars into a quasi-political quagmire. So goes the ongoing labor dispute between the NFL and its referees, who are squabbling over a difference of $30 million (the precise amount of money the NFL recently donated to the National Institute of Health for concussion research). The donation was a saavy but predictable PR-play by NFL commissioner Roger Goodell, in the wake of Junior Seau’s suicide, to let the public know that the league won’t put a price on safety.

Of course, that’s a farce, since the highly-trained professionals who police the safety of the game are currently sitting on the couch while wide-eyed former Lingerie Football League officials administer phantom yardage, phantom pass interference penalties and let helmet-to-helmet genocides occur without so much as a flag.

And all over what? The two sides are $30 million apart, according to reports, which seems like a lot of money until you consider the immense scale of the NFL economy.

The NFL makes roughly $9 billion in revenue per season. Over the next decade, the league will make a guaranteed $27 billion on television contracts alone. That breaks down to about $200 million per team per year, before any tickets, parking passes, jerseys or $10 beers are sold.

Despite the NFL’s incredible, unprecedented growth over the past two decades, Goodell threw down the gauntlet to the Referees Association this summer, asking them to not only give up their day jobs to work full-time for the league, but to do so at a 16-percent cut in pay. The referees countered with their own demands — a bump in pay that would account for ⅓ of 1 percent of the NFL’s total revenue.

The math isn’t important. What is fascinating is the public's need to turn the rift into a parable for our hyper-partisan, aneurysmic polical climate. Search the comment section of any article pertaining to the lockout and you’ll stumble upon some version of the same argument: Sorry, greedy unions, that’s capitalism.

And that would be a fair argument if the NFL was, in fact, operating under free market conditions. Unfortunately, for the past four decades, NFL owners have been benefiting from an unprecedented welfare state and blackmailing tax payers for millions upon millions of dollars to build new stadiums. When a small business wants raise capital to build a new facility, it goes to a bank and pays interest. When an NFL franchise wants to build a new facility, it goes to the tax payer waving Hoover flags. Calling NFL owners entrepreneurs is like calling Don Fanucci a simple businessman.

How much has the taxpayer contributed to the growth of the NFL?

In 1950, public ownership of NFL stadiums was 36 percent.

By 1991, public ownership skyrocketed to 93 percent.

Today, 30 of the 31 current NFL stadiums were subsidized by taxpayers. Only MetLife stadium, shared by the New York Giants and Jets, was built without public financing. Since 2000, the public has paid for 58-63 percent of stadium construction costs.

More disturbingly, Bloomberg estimates that U.S. taxpayers have lost $4 billion on tax-exempt bonds used in the stadium construction boom since 1986.

Perhaps in the ‘50s and ‘60s, when the NFL was a fledgling business without guaranteed TV deals, it made sense for cities to help foot the bill. But how can NFL owners continue to cry poverty when Goodell announces that the league is aiming to triple its revenue to $25 billion per year by 2027? The public funding of stadiums is corporate welfare at best, flat-out extortion at worst.

Take, for example, Vikings owner Ziggy Wilf’s scheme to bilk the state of Minnesota for nearly 60 percent of the cost of his new $1 billion stadium. With the city of Los Angeles courting the franchise and the roof of the Metrodome imploded by snow, Wilf and his cronies sat in front of Minneapolis City Hall with the proverbial packed suitcase and secured $348 million from the state and another $150 million from the city of Minneapolis (a city which lost $150 million in state funding for schools last year because of home foreclosures).

Nevermind that the Vikings franchise is worth nearly $1 billion, according to Forbes, or that Wilf’s personal net worth is over $1 billion. Every time someone buys a beer, eats at a restaurant or books a hotel in Minneapolis, Wilf gets to wet his beak through city-wide sales and hospitality taxes used to fund the stadium (here’s the depressing breakdown).

If there’s an ounce of juice to squeeze out of taxpayers (or players or referees), NFL owners will break out the vice grips. They’ll drink your milkshake and then charge you for the extra straw. Since securing public funding, the value of the Vikings’ franchise jumped 22 percent. The best part? The stadium is property-tax free.

The Vikings are hardly a unique story. Dallas Cowboys owner Jerry Jones reached into the pocket of the city of Arlington for $325 million to build his new palace — and then made sure that it was the only stadium in the NFL that didn’t offer public transportation services. Why? Jones owns all the parking lots outside the stadium and charges a league-high $75 to park one vehicle.

In cases of mass extortion such as this, it’s crucial for the hucksters to employ a really well-polished lie. In this case, that lie, told hundreds of times over the past 40 years, is that new stadiums lead to economic revitalization.

The data tells a much different story.

The most comprehensive study done on the economic implications of sports stadiums found that they do little to bolster local economies. In some cases, they actually hurt them. In a 30-year study of 37 metropolitan areas with pro sports franchises, sports economists found that the real per capita income of city residents decreased on average with the construction of a new stadium.

So why do these stadiums inevitably get built? Because in the end, the average fan just wants to escape from the rigged game of life for a few hours every Sunday, so they dress up in full Viking armor and head down to city hall and willfully submit themselves to the rigged game. They hand over their wallets. They surrender to the void. Because what’s the alternative? The L.A. Vikings.

The only thing the NFL fan asks in return for this shellacking is a great product. The poorly organized farce on display in Week 2 wasn’t just a hazard to the safety of players, it was a slap in the face to the integrity of the game. And the game itself is the only facet of the NFL that still clings to a shred of integrity.

Why would the NFL draw such a thick line in the sand over such a small amount of money when the game is at the apex of its popularity and profitability? Why risk it? Because Goodell knows he can. You'll still watch.

Regardless of your political views or thoughts on organized labor, remember this: The NFL operates in a fantasy land that’s not beholden to normal rules of economics — and, hell, if Goodell’s secret policing of the Saints’ bounty scandal is any indication, it's not beholden to the rule of law either.

Only a group of welfare kings as brazenly craven and shameless as NFL owners could somehow spin themselves as just a group of honest business owners trying to defend themselves against a greedy union. If Roger Goodell and his merry band of po-faced billionaires want to turn the NFL landscape into a Randian free-market enterprise, so be it.

They can start by writing reimbursement checks to cash-strapped cities across America who have financed their stupefyingly profitable businesses.

There are no politics here, only facts. So pardon me while I borrow a highly-charged political sound bite. In this case, there can be no doubt.

Owners of the NFL, you didn’t build that.

Get the real professionals back on the field. You owe us that much.