Cornhole. Quidditch. Underwater hockey. Pittsburgh has a team for you. 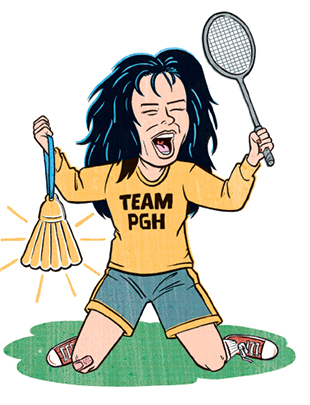 This summer’s Olympic games held a lot of surprises for me — the most unexpected of which was learning that badminton was an official Olympic sport, complete with medals and a governing body and everything. Badminton. Hitting a shuttlecock *heehee* as hard as you can, only to watch the air catch the holes and float the blasted thing to the other side of the net like a delicate feather that caught a gentle breeze.

I also learned that, right here in Pittsburgh, you can learn the way of the shuttlecock with the Pittsburgh Badminton Club. (As an aside, if I ever write a book about badminton, it will be called The Way of the Shuttlecock.)

Anyway, this got me thinking about what other unusual groups and clubs call Pittsburgh home, so I hopped down the internet wormhole to see what I could find. Hold on to your shuttlecocks, Pittsburgh.

For recreation, you could play competitive cornhole with PUMP’s Pittsburgh Sports League. (In case you’re wondering, cornhole is that game you play at picnics — you know, the one where you attempt to toss beanbags into holes cut in a wooden plank.)

If cornhole isn’t your forte (and really, who would admit that it is?), you can find clubs in Pittsburgh dedicated to darts, horseshoes and table tennis.

But perhaps those recreational games are too tame for you. Maybe you prefer to test your mettle in more exertive ways. If so, you’ll want to check out the Pittsburgh Hurling Club, where members engage in an Irish sport that combines lacrosse and field hockey. Or try the Broomball Club of Pittsburgh’s namesake sport — think ice hockey where the puck is a ball and the stick is a broom. No, really. I’m serious.

The Pittsburgh Quidditch Club also wields brooms in the name of sport. The group’s Harry Potter-obsessed members have the unfortunate burden of gravity preventing them from flying away on the brooms they hold between their legs.

Neither of those sound appealing? Might you be interested in membership with the Pittsburgh Parkour Association, the Three Rivers Inline Club or even Pittsburgh’s underwater hockey team, the Stingrays? Which begs the question: Is underwater broomball a thing yet?

Men who love My Little Pony can check their manhood at the door and join the West Penn Bronies, while anyone who owns a Delorean can join the Pittsburgh Area Delorean Maintenance Club, where I hope there’s a lot of talk about flux capacitors and gigawatts.

If you’re a bit more risqué, you’ll want to check out the Pittsburgh Three Rivers Leather Club — or perhaps the West Penn Naturist nudist swimming club, whose motto is: “A friendly bunch of folks!” I would imagine so — because have you ever heard of an introverted, shy nudist?

Worried about the end-of-the-world zombie uprising? No need — we’ve got the Pittsburgh Zombie Response Team to protect our brains! And we can build shelters using the wood that the Officially Unofficial University of Pittsburgh Lumberjack Club cuts down for us.

Need a rush? Join Pittsburgh Adrenaline, which most recently met up to “boulder” on Ladies Night, where the men who dared boulder in sports bras received a discount, too. That’s brave  on several levels.

I should probably join the Clever Wine Group of Pittsburgh if I ever hope to understand that wine comes in more than three flavors — red, white and fruit.

All of that is a small sample of the many unusual local clubs you can join. As for me, I’ve got my eye on the Pittsburgh Pot Belly and Mini Pigs Group.

I don’t own a porker — but I sure would like to join a club where I can regularly nuzzle one. Because then who needs to pay for therapy?

This article appears in the October 2012 issue of Pittsburgh Magazine.
Categories: From the Magazine, Hot Reads, PittGirl