Persistence and sheer talent have played a role in making Wayno, the illustrator with a simple moniker, a household name. 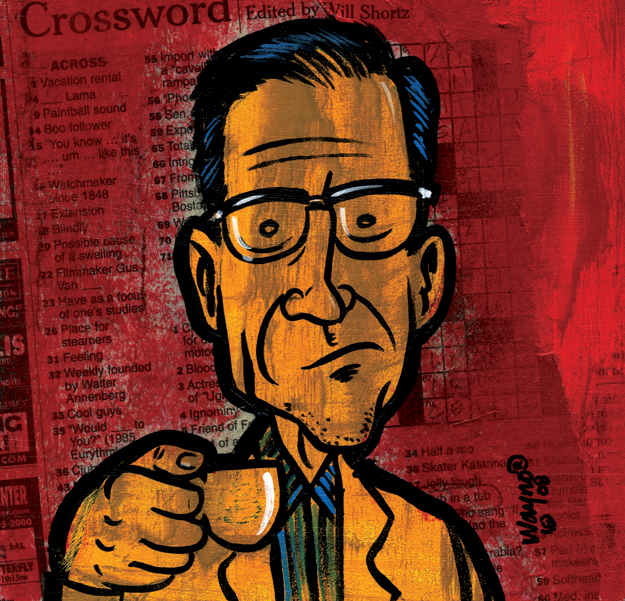 If you read newspapers and magazines, you’ve undoubtedly been entertained by the creations of Wayno, a native Pittsburgher who’s built a reputation as the city’s go-to guy for eye-popping comics and illustrations. A trained engineer, this self-taught artist began self-publishing comics and drawings in the 1980s, just after graduating from the University of Pittsburgh. Now, you can see his work in The New Yorker and “Bizarro,” the popular newspaper comic series (stay tuned for his next guest appearance, taking place Dec. 26 through Jan. 1).

The Mt. Lebanon resident is a member of the Pittsburgh Society of Illustrators and the National Cartoonists Society, and is a founding member of the Board of Directors of the ToonSeum, the local museum dedicated to cartoon arts. Upon glancing at Wayno, 55, it’s interesting that he more closely resembles British actors Jeremy Irons or Richard E. Grant than a local artist — having an angular face, square jaw and long, dark hair parted down the middle while sporting a black-leather jacket and jeans. The following are highlights from a conversation about his life and art.

Why one name?
My grandfather gave me that nickname as a child, and my family has called me that ever since. It’s snappy and easy to remember. I made the choice early in my career to use one name; I wanted to keep my artistic career and my other work separate, so I registered this fictitious name to remain more private.  I’m a ham — and that’s contradictory — but I like to maintain my privacy.

Tell us about your color scheme. There seems to be a pattern.
Yes, I find myself working with red and yellow and a black line.  I have no idea why that is.  They are very strong colors; I’ve always been drawn to them.  And I like to limit the color palette; it’s part of my philosophy to take things away. I believe that being bound by parameters and constraints produces the best results.  It’s like a piece of advice my hero Thelonious Monk once offered: “Don’t play every note.”

Although you’ve illustrated for The New Yorker, an elegant and serious publication, you have a jocular side.  Tell us about the humor of Wayno.
I’m not above silly jokes when there are layers to the jokes, a delayed audience reaction. I was in Borders Books and Music once, and a parent was holding a cookbook called Cooking with Pooh and showing it to her child. The ridiculousness of it was lost on them. I couldn’t stop thinking about it.

From where do you get your inspiration?
My inspiration does not just come from somewhere unknown. It comes from labor, working. It’s the responsibility of an artist and an illustrator to have a cultural vocabulary. You can’t stop learning, reading, listening. I get a lot of good jokes just from having dinner with friends.

Do you think it’s the responsibility of the artist to inform and comment and not just entertain?
I’m not an editorial cartoonist, but some of my better work has an opinion—an opinion but not an axe to grind.  It’s fun when you can straddle that border.  I don’t really enjoy something preaching to me, something dogmatic.

What are your favorite pieces or collaborations, the works of which you’re most proud?
I worked with Nickelodeon Magazine for almost its entire run—from 1993 to approximately 2007 or 2008. I was very sad to see that go. They exposed a lot of unlikely cartoonists to a great audience of fanatical readers.  Also, six years ago, I worked with Rhino Records on a box set of The Ramones that came with a hard cover comic book to which 25 artists contributed.  I was excited to be included with all of the other artists.  It was, for me, a dream job; I almost would have done it for free.

If you could produce only one more piece, what would it look like?
A very large painting the size of a billboard. It would be an attempt to make one statement about what influences me.  It would incorporate music and pop culture and be humorous—a last meal.

This article appears in the January 2012 issue of Pittsburgh Magazine.
Categories: Arts & Entertainment