Did you know that the world's largest watchmaking school was once located in the North Side? 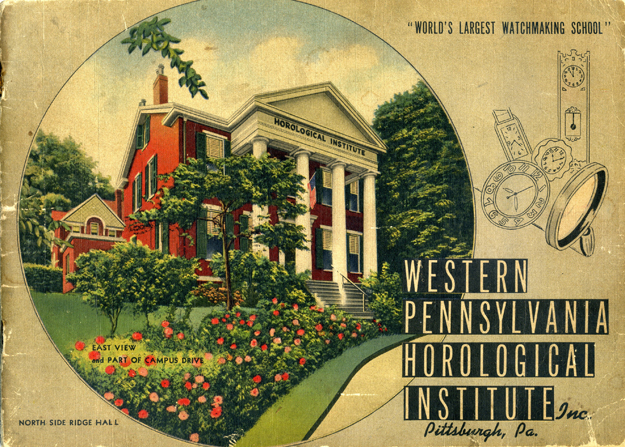 I was sitting in my office one day recently, and a man called my landline. He introduced himself as John Hagblom from West Mifflin, and he wondered if I knew anything about the world’s largest watchmaking school. It used to be on the North Side, he claimed. I said I didn’t know anything about it.

So, he invited me to come and see some of the information he kept from the school. He explained that his late uncle, William O. Smith, founded and operated the Western Pennsylvania Horological Institute on ritzy Ridge Avenue. Then he said, “I have some pictures that were taken there and at the school in Sheraden. I have a write-up from the ’50s.”

OK, I was hooked. I decided to go check it out.

Hagblom lives in a modest brick house beside the Saint Hedwig Cemetery. He retired after working many years at the Bettis Plant. “I worked on the Nautilus and the first nuclear reactor for Shippingport,” he told me. Although his uncle tried to get him to consider a career in watchmaking, Haglom never attended the school. He just likes to keep things—like a promotional brochure from the old WPHI.

The booklet is a cool relic. The cover features a color image of the Horological Institute, which moved into a stately white-columned house next to the old Denny mansion on one of the city’s most fabled streets in 1943. That address, 808 Ridge Ave., is now the site of CCAC’s Allegheny Campus. Smith founded the watchmaking institute and named himself its president and technical director.

Originally from Charleston, S.C., where his father and grandfather were both watchmakers, Smith moved to Pittsburgh in 1922 and worked briefly for a jeweler in McKeesport. In 1936, he started teaching watchmaking in his home and kept getting more and more students, so he rented space downtown. Later, he moved to the North Side, and when his trade school really took off after World War II, he turned an old roller-skating rink into his substantial Sheraden School (now an unmarked warehouse near Langley High School). At one time, the WPHI comprised eight buildings.

The photos in the old brochure really prove the claim that it was the world’s largest watchmaking school. Several photos include hundreds of men (and a few women) at desks, many with magnifying loupes on their foreheads. Because watchmakers’ benches can be very high, the students sometimes look very odd—almost childlike, with intense eyes as they concentrated on the timepieces in front of them.

Smith also became renowned throughout the watchmaking world for his set of books that explained how to repair chronographs, the ingenious multipurpose watches that became popular after World War II. He created a world where horological information could be shared and passed on to later generations. But watches changed; cheap quartz and electronic watches became popular. The school closed in the late 1960s.

“We use a watch now ’til it stops. Then we buy a new one,” says Hagblom. “It’s a different world.”

WQED TV producer Rick Sebak doesn’t wear a watch nowadays. He checks the time on his iPhone instead.

This article appears in the October 2011 issue of Pittsburgh Magazine.
Categories: Rick Sebak