I’ve always hoped that, one day, I’d be able to interview the Pittsburgh Steelers, but this is not how I thought it would go:

I’m hiding at the end of a narrow hallway, wearing Joker makeup and clutching a rubber head. Steelers kicker Jeff Reed is in an opposite corner, looming, in full circus garb. A cowering trio of teenagers rounds Reed’s corner; he screams and lunges forward. The group squeals and hurries away from the kicker, then it’s on to the next one.

So, yeah. Not what I expected from my first Steelers one-on-one.

We obviously weren’t in the Heinz Field locker room; we were in South Park’s Hundred Acres Manor haunted house, a yearly Halloween attraction.

The haunt is entirely volunteer-based, and the proceeds are split between two charities: Animal Friends and the Homeless Children’s Education Fund. A group works on the house year-round (construction for the Halloween season begins in January), and the dedication shows: It’s one of the longest, scariest and most impressive spook-houses in town.

Steelers players have volunteered at the house for five years. On Monday night’s “Steelers Fright Night,” the team arrived straight from practice, which followed a Sunday win and a flight back from Miami.

“I’m a little sore,” Reed says, “but I think everyone else is a little more sore than me. It’s just always good to see a good turnout here.”

The evening began with the players enduring the lengthy attraction themselves. Reed was mostly unwavering throughout, but the house’s signature maze gave him trouble.

“I’d still be in there if I didn’t get help,” he says afterward. 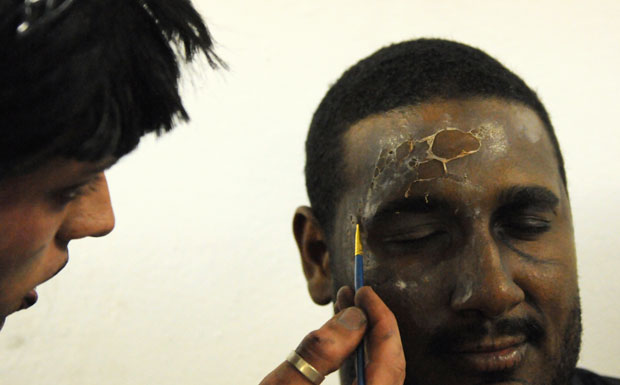 Max Starks in the make-up room prior to heading into the haunted house.

After the team walkthrough, the players head for the makeup and costume room. I ask a makeup artist to explain the disguise he’s preparing for offensive tackle Max Starks.

“I’m going to make [Starks] look like half his face is burned away,” the artist says.

Nearby, tight end Matt Spaeth is made-over into an intimidating zombie and creeps behind unsuspecting teammates and friends, his 6′ 7" frame towering above his startled victims.

“It’s all about the spot [in the house,]” he says, giving me a glimpse into his strategy: “Last year I had a chainsaw. I prefer the chainsaws.”

I quickly suit up myself—a thorough application of Heath Ledger-style Joker makeup and a floor-length burlap sack—and find Reed, who’s just about ready to head in. The plan? I’ll be positioned alongside him in the spook-house to observe his unique haunting style. This will, of course, require me to scare the guests, too.

While we wait to be escorted in, I ask Starks for an assessment of Reed’s scare skills. “Jeff has a great track record,” Starks says. “He’s a veteran in the clown room. He’ll definitely catch people off guard.”

Unfortunately, there’s a delay in admitting guests, and the spook-house is empty when we arrive. Wanting to scare as many as he can, Reed calls an audible and heads for “the garden”—a courtyard where the spooks with chainsaws stun guests. Reed positions himself in a dark corner, hoping he won’t be noticed in the fog. I slide down the hallway, waiting for the first crew to pass.

I’m shocked when Reed remains still as the first group passes. I ask him what went wrong. Apparently, they were looking straight at him: He wants to wait for those who aren’t expecting anything.

I see what he means with the next crew: One of the chainsaw assailants chases his target almost to Reed’s feet, and she isn’t looking at him as they round the corner. Just then, Reed lunges forward, clown makeup twisting into a furious scream, inches from the poor soul’s face.

All in all, it was a fine outing for the Steelers. In the name of charity, the Steelers were all too happy to extend their on-field intensity to the spook-house and performed at an undeniably all-star level.

Though Reed did take it easy on one victim.

“I told her she was lucky. I would’ve scared her, but she was wearing my jersey.”

This article appears in the October 2010 issue of Pittsburgh Magazine.
Categories: Sports