These newborns deserve the kind of party that comes only once every four years.

Dr. Carey Andrew-Jaja, known inside and outside of Magee-Womens Hospital of UPMC as “the singing obstetrician,” greets every baby he delivers with a song. The infants who arrived on Leap Day got an even bigger welcome.

The Leap Year babies and their families were treated to a nursery birthday party complete with party hats, cupcakes, favors and Dr. Andrew-Jaja leading a chorus of “Happy Birthday.”

“These babies are lucky,” Dr. Andrew-Jaja said after he and a choir or nurses completed four renditions of the song. “They’re only going to hear this maybe every four years, so we might as well sing four times.”

These little ones will have to wait four years before their birthday actually lands on the calendar again and of course they won't remember a thing of this special celebration. We suspect their parents, on the other hand, will have memories that will last a lifetime.

Waiting for a newborn to arrive can sometimes add tension to a couple's relationship. That's apparently the case for two bald eagles in Hays who are caring for three eggs. A new video (above) posted by PixController, which provides a feed from a web camera overlooking the nest, shows the two eagles getting physical as to who gets to sit on the eggs. At one point, the dad, who was sitting on the eggs like it was his favorite recliner, was unceremoniously removed by the mom, who clearly wanted some alone time in the nest. 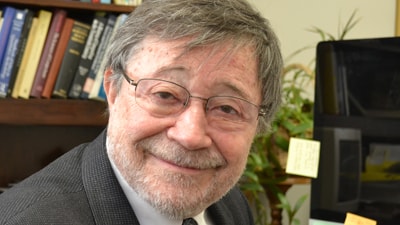 The award was established in 1969 by the late Pittsburgh physician Joseph Z. Dickson and his wife Agnes Fisher Dickson. It is given annually to individuals in the United States who make outstanding contributions to science.

Pearl is the Chancellor’s Professor of Computer Science and Statistics at UCLA. His work has influenced not only machine learning, but also natural language processing, computer vision, robotics, computational biology, econometrics, cognitive science and statistics.

Part of the Dickson cash prize will be donated to Pearl's alma mater, the Technion, the Israel Institute of Technology, and part to the Daniel Pearl Foundation, which was created in memory of his son, a journalist who was murdered in Pakistan in 2002.