This picture pretty much sums up the Jets' night in the Steel City.

h/t Derek of the mighty Pensblog

I could watch that all day. My favorite part is that magical little crease of disdain in the corner of his mouth as he looks down at the discarded headset.

And here I thought Rex Ryan knew how to deal with defeat.

It’s only fitting that after a full week of the media talking about the two quarterbacks, the Steelers took control of the game the old fashioned way, by running the ball through the Jets’ vaunted defense for nearly an entire quarter.

Rashard Mendenhall is a beast. Plain and simple. He made Jets linebacker Bart Scott look like a little baby-child.

And how about the work of offensive line coach Sean Kugler? After center Maurkice Pouncey was knocked out of the game on the opening drive, the Steelers’ offensive line looked like this:

That patchwork gang of backups and washed-ups took on one of the league’s best front sevens and smashed them in the mouth.

As Mike Tomlin says, "The standard is the standard."

Unbelievably, incomprehensibly, just five months after Las Vegas projected an 8-8 season, the Steelers are headed to Dallas for Super Bowl 45. And guess who’ll have the best seat in the house? 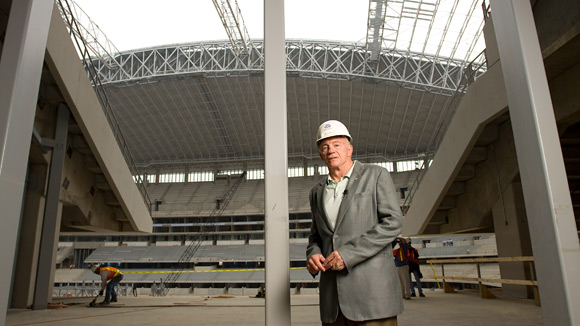 Once again, it’s a great day to be a Steelers fan. Believe.