Watch: Pittsburgh Grooms Pop the Question with a Song

Some may say: "You'd think that people would have had enough of silly love songs," but that’s not the case for these a cappella groups and the couples for whom they've performed. 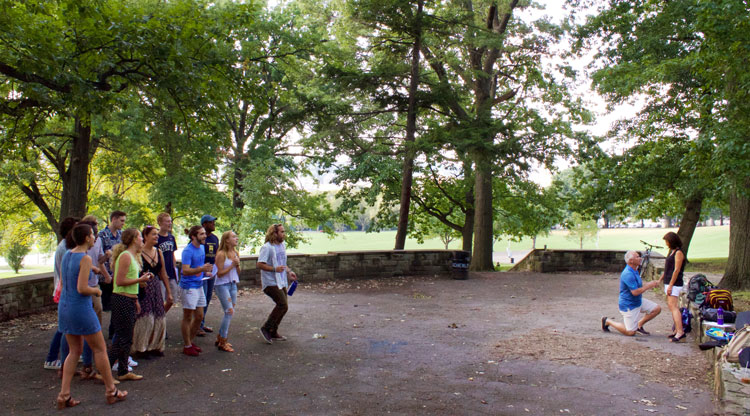 Sandor “Sandy” Katz didn’t hit the drawing board when planning the perfect proposal to his fiancée, Esther Haguel. He looked to the internet for inspiration.

“I was looking for a creative way to propose, [and] I went online and typed in ‘Pittsburgh a cappella groups’ and looked at a few of them,” he says. “The Pitt Pendulums [from the University of Pittsburgh] seemed to be what I was looking for, so I gave them a call and was surprised that they were interested. When I finally met them, they were just as excited as I was.”

Thanks to the popularity of shows like “Sing It On” and movies like “Pitch Perfect,” a cappella groups are having their solo moment when it comes to weddings and proposals. And with the help of a few Pittsburgh collegiate groups, these couples’ proposals and weddings hit all the right notes with their friends and family.

The Pendulums were just as surprised as Sandy when he asked them to take part in his surprise proposal (video above) in September.

“We were excited that somebody watched our videos and liked us enough that they wanted us to be a part of this really huge thing,” says Larisa Mednis, a sophomore member of the group.

After viewing the group's YouTube channel, Sandy emailed the group over the summer about performing Lake Street Dive’s cover of The Drifter’s “This Magic Moment” for his proposal. The group told him members could learn it could after auditions ended and the a cappella year began.

With all that planning came a little spontaneity, as The Pendulums learned one night during rehearsal.

“He [Sandy] decided to come into rehearsal one Thursday to sing it with us, and we were trying to figure out a date [for the proposal] and plan a few weeks ahead, and he was like, ‘What if we just did it tomorrow?’” says Cole Boillat, music director of the Pitt Pendulums.

The next day, on Sept. 16, The Pendulums gathered in Schenley Park in Oakland and feigned practicing as Sandy and Esther sat nearby for a picnic. Then, the pair walked towards the Pendulums and Sandy joined the group as the solo line began. Like a true romance man, Sandy popped the question as he serenaded Esther, pulling out the ring and dropping to one knee as the group took over the solo line.

For Sandy and Esther, the proposal was truly a magic moment thanks to the Pendulums’ help.

“People like to remember their proposal stories,” Sandy says. “This is one we’ll never forget, and I know Esther feels the same way. We can’t thank them enough.” 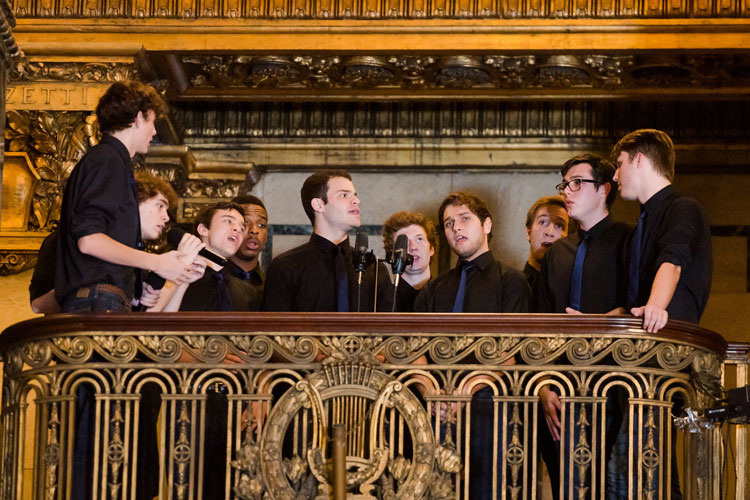 The Originals at Carnegie Mellon University

Here are some details several Pittsburgh collegiate a cappella groups want you know before asking them to perform at your wedding or proposal.

Unlike wedding bands, a cappella groups can’t pull up a guitar tablature and learn the chords in rehearsal; they have to arrange them, practice and polish the songs they perform. Because this takes tremendous amounts of time — upwards of 12 hours per song — group members say it’s incredibly important to give them plenty of time to arrange a new song. Otherwise, it might be best to choose from their repertoire.

“It takes a lot of work,” says Erik Fredriksen, vice president of The Originals at Carnegie Mellon University. “They don’t want to do it [poorly]. They want to rehearse it and make it really good.”

Although summer is wedding season, many groups prefer to perform at spring weddings because it gives them enough time to arrange and polish a song — it’s well after the audition rush and new member acclimation period that happens at the beginning of the fall semester. Also, a majority of their members are still in the area.

“A lot of these gigs get offered during the summer because that’s when a lot of these things are happening, but [since it’s the summer] you run the risk that your members can’t be in town for it,” says Andrew Dolan, president of C Flat Run at Pitt. ”It’s the number one reason why we’ve had to turn down these gigs.”

But regardless of season, one of the biggest reasons why a capella groups turn down wedding gigs, other than notice, is attendance.

“If we can’t get enough people, we can’t do the gig,” says Boillat. “We have to make sure we have one-to-two of every voice part, on top of soloists and vocalpercussion. We don’t want them to pay for something that’s not a good representation of who we are.”

A cappella groups need certain pieces of equipment, like solo and area microphones and amplifiers, so the crowd can hear them during their performance. If the group cannot provide this themselves, then you might need to contact your wedding or reception venue to provide it.

And if you invite a group to perform at your wedding or proposal, they’ll likely be incredibly grateful for the experience.

“It’s a lot of fun to see people’s reactions, and a wedding or proposal is one of the happiest moments of someone’s life,” says Nitsan Shai, artistic director of The Originals. “Being a part of that is pretty cool.” 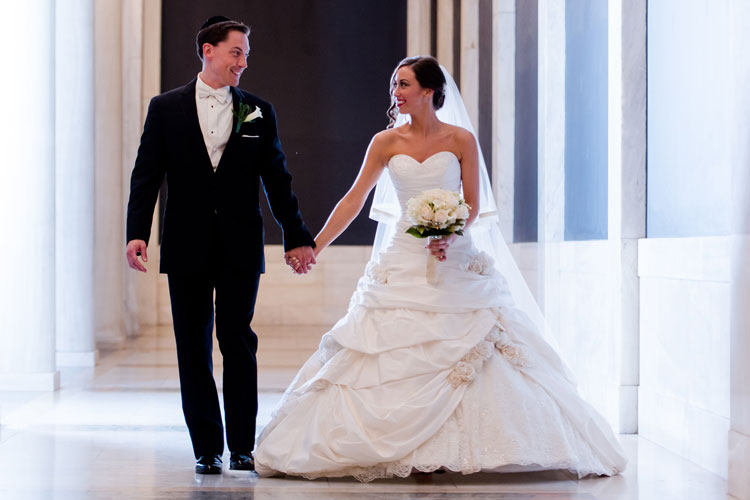 “Just the Two of Us”

For Rachel Anolik and her husband, Michael Moravan, the decision to have an a cappella group at their wedding was as easy as do-re-mi.

The couple met in the fall of 2009 when they both joined On Call, a med student a cappella group at the University of Rochester.

Like Sandy, Rachel found her choice group — The Originals — online.

“We listened to a couple of groups from Pitt and from Duquesne, and we just really liked the sound of The Originals,” she says. “We will occasionally listen to some a cappella music and so [they] reminded us of the music that we like.”

According to Rachel, it also made sense to book The Originals to perform since the reception was in the Carnegie Music Hall foyer.

“[Their performance] helped tie in the way that we met into our wedding, and I thought people liked it because it was very original,” she says, no pun intended. “It was just a neat, interesting, personal twist on our day that we really enjoyed.”

Sarah Dixon’s proposal was planned perfectly with help from Pittch Please at the University of Pittsburgh.

When her now-husband, Edgar Boord, was planning the proposal in 2014 with a mutual friend, they both agreed that having an a cappella group perform would make the experience more heartfelt.

Since Sarah’s brother Billy was president of the group at the time, all Edgar had to do was contact him over the phone to start planning the big event.

While Sarah checked out new exhibits at the Mattress Factory with a friend, Edgar decorated her living room with streamers, balloon and rose petals. Then, her friend blindfolded her and drove back to the house, where all her closest friend and family were waiting. Pittch Please began singing Stevie Wonder’s “Isn’t She Lovely?” as she entered.

Sarah shortly caught on to Edgar’s plan, but that didn’t stop her from enjoying the moment.

“Since it was the weekend of my birthday I thought it was a surprise party, but as I was being led into the house, they started singing and I knew immediately what was happening,” she says. “It could not have been more perfect, and having them there made all the difference. ” 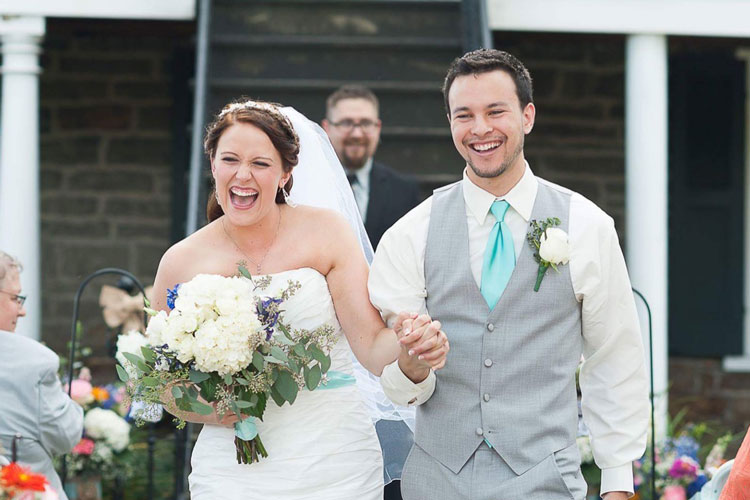 “I got engaged, and then a few days later I went to rehearsal right after our fall concert, and no one knew I was engaged,” she says. “I actually got down on one knee, showed them my ring and said, ‘Will you perform at my wedding?’”

So when the big day came around on July 31, 2015, after Shannon and her husband, Michael DeMateo, said “I do,” C Flat sang “Sweet Pea” by Amos Lee, a song Shannon arranged while she was a member the group.

At the reception, they performed about 10 more songs, including “Slow Dancing in a Burning Room” by John Mayer and “Lights” by Journey, both of which Shannon arranged.

“We love performing at weddings, and Shannon's [wedding] was really an especially meaningful experience,” Dolan says. “The chance to contribute to a friend and group alumna’s special day with our music was a really memorable one.”

Shannon says her wedding was a celebration of love — for her husband, for her family and friends, and for her a cappella group.

“There’s something special about [a cappella] that makes your college experience complete,” she says. “It was such an integral part to who I was in college, and my wedding would not have been complete if they hadn’t been there to support me.”