As the founder of the Alignment Chapter, Ray Nell Jones delivers bundles of essential items to struggling single mothers in Pittsburgh, as well as 18 other states.

For the past 11 years, Ray Nell Jones has been fighting for struggling single mothers in her neighborhood. She never expected a staff member from “The Ellen DeGeneres Show” to discover her on social media and offer her an interview with an associate producer. But when DeGeneres herself surprised Jones and her family in her Mother’s Day special this year and gifted her a Hyundai Santa Fe, Jones says it was an “out-of-body experience.”

“I have to honestly say, it felt good to be recognized for all the hard work that I do and how I risk my life everyday to make sure other families have what they need,” Jones says.

Jones, an administrative assistant at the University of Pittsburgh’s Office of Student Life, founded the Alignment Chapter with her husband Donald in 2019. It provides same-day emergency assistance to single mothers in need of support in the form of boxes filled with essential household items, anything from toilet paper and cleaning products to baby formula and diapers. 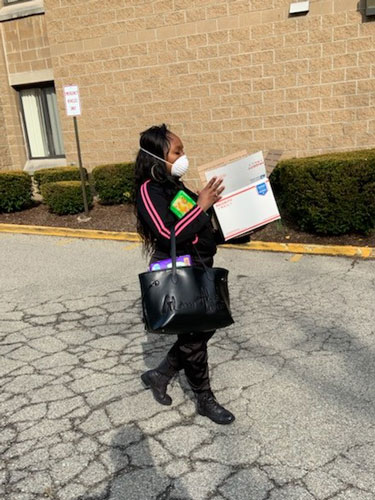 With the help from her “life-savers”, the name she gives to anyone who donates their own funds, products or time to the nonprofit, Jones is able to deliver the boxes, meant to last for a 30-day period, to single mothers in 18 states. Jones personally delivers boxes to mothers in Pittsburgh but also does daily post-office runs to ship supplies to life-savers in other states.

One of the main reasons Jones started the Alignment Chapter was because she was a struggling single mother herself and was even homeless at one point. Before she launched her nonprofit, Jones says she found ways to support single mothers in need by using her skills as an extreme couponer.

“I would stockpile so much stuff, and I was like, ‘I don’t need all of this stuff, why not give it away?’  I would put my products, like deodorant and other supplies, in a bag and I would walk to the local bus stop and give it to [single] moms.”

Mothers who are in need of essential items fill out an online application to receive supplies, and Jones says her requests have gone from 25 per day to more than 150 per day since the pandemic started.

With nearly 39 million Americans having sought unemployment benefits since the coronavirus outbreak and daycares still closed across the country, single mothers are in need more than ever.

Besides donating supplies, Jones also offers an online webinar course for mothers to gain financial literacy, which teaches them about credit and how to save money. Not only does she want to increase the income for single mothers, but one of her main missions is to reduce the suicide rate in mothers, as well as the child neglect statistics. When a single mother jumped off Homestead Grays Bridge while her three children watched last year, Jones says this “ignited a fire” in her.

“Things are affecting single mothers more severely, and people don’t know about it,” Jones says. “This is hurting households. Whenever we get a request and a mother has four kids or five kids, it is our duty to make sure it’s fulfilled.

“I do this because it’s my passion,” Jones says. “I no longer want this to be a silent thing. I want to make sure [single mothers] get serviced and they get what they need.”