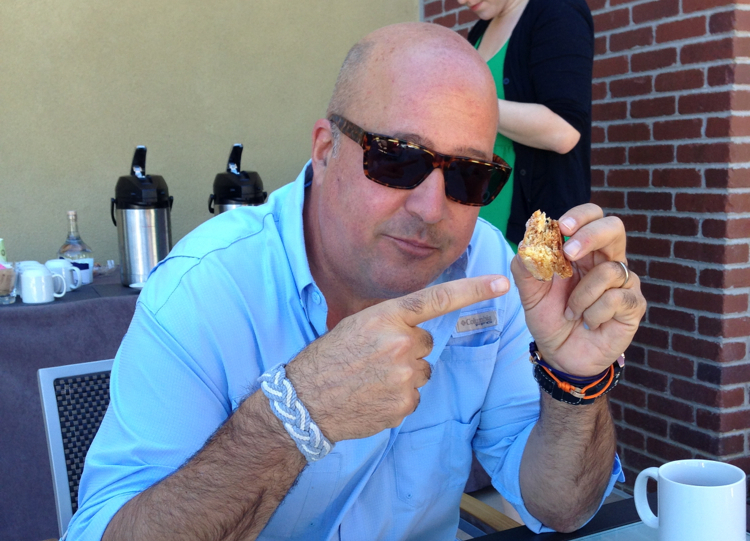 Andrew Zimmern, host of the Travel Channel’s “Bizarre Foods America,” has a soft spot for food that’s authentically off-kilter. So we knew he would enjoy his recent trip to Pittsburgh. We just didn’t know he’d show us so much love.

The Pittsburgh episode aired on Monday, and was a beautiful tribute to our emerging foodie scene and the fascinating characters who are driving it. Zimmern rolled up his sleeves at Cure’s butcher’s table with Justin Severino, received a walking history of the Strip District from our own Rick Sebak and had the timeless stuffed cabbage at Emil’s.

What we loved most about the episode is that Zimmern was never cloying or patronizing — something that happens with far too many TV personalities who come to town brandishing decades-old stereotypes about the culture here. (Guy Fieri’s trip to Kelly O’s on “Diners, Drive-Ins and Dives” was an especially embarrassing act of Yinzploitation.)

Zimmern was even honest about his predetermined bias against the Primanti Bros. sandwich. He ended up loving it.

#Gossip: Regular Pittsburghers wind up at GQ party, end up being stars

The Los Angeles Times went to GQ’s Men of the Year party at the swanky Wilshire Ebell Theatre. Naturally, the place was wall-to-wall with celebs. Will Ferrell. Matthew McConaughey. Lady Gaga. So who were the Times’ favorite people at the party?

"But two of our favorite folks at the party turned out to be a very, very not-famous couple from Pittsburgh by the name of Joseph and Claire Faulk, whom we met by sheer happenstance. The Faulks were there, it turns out, because they'd won a GQ– and Olympus-sponsored all-expenses-paid "men of influence" contest. Their excitement and wonderment at the celebrity swirl was truly something to behold.

We ended up crossing paths with the Faulks several times over the course of the evening, and as we made our last sweep through the Ebell for any last celebrity sightings, we noticed them chatting amiably on the patio with "Mad Men" creator Matthew Weiner and actor Clark Duke (Hot Tub Time Machine).

A deliciously memorable "only in Hollywood" moment if ever there was one."

Our favorite part is the look of shame at the end when it’s like, “Yeah, I ate some anyway and I’m not proud of it.”