After noting how much fabric ends up in landfills, Pittsburgh designer Kelly Simpson-Scupelli found a way to incorporate the unused scraps into her fashion line. 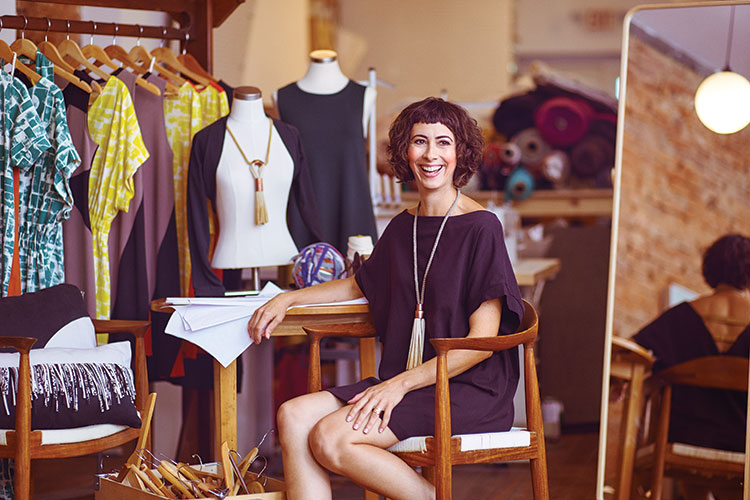 Sitting at a table in a room with beautiful hardwood floors surrounded by racks of clothing, Kelly Simpson-Scupelli couldn’t be further from the beginnings of her fashion career. In 2006, the designer and owner of Kelly Lane was working out of her house creating skirts on a Singer sewing machine she received as a gift. Now it’s three days until the grand opening of Make+Matter, a collaborative studio and storefront shared with Rebekah Joy of Flux Bene and Rona Chang of Otto Finn.

Kelly Lane is known for its color blocking and use of beautiful prints that Simpson-Scupelli designs herself. However, her concern for the environment impacts her designs as much as her sense of style. Apparel industry professionals estimate that about 15 to 20 percent of the fabric used to produce clothing ends up in landfills because it’s simply easier to dump the scraps than to recycle them.

“One reason pollution from the fashion industry ranks second to oil and gas is that many factories simply discard fabric cut-aways directly into the garbage,” Simpson-Scupelli says. In addition, there is the “inventory waste” created because most manufacturers will not produce small numbers of items, so designers are forced to order more than they think they can sell.

Simpson-Scupelli has worked to find solutions to this from the beginning. In 2008, A-Line by Kelly Lane was launched. All scraps and excess fabric were returned from her New York manufacturer. She sorted the scraps by size and used the remnants to create A-line skirts. These designs were extremely limited, maybe only five of a particular style, generating income while keeping “scraps” from ending up in landfills. This process continued until 2013, when she put the business on hold to spend time with her newborn son.

Returning to the studio in 2016, Kelly Lane launched a kid’s line to accompany its women’s apparel. Children’s clothing serves a similar role as A-Line by Kelly Lane; the small pieces left over from creating the women’s collection are well-suited for creating kids clothing.

But there are still even smaller scraps of fabric that cannot be used for clothing. The goal of creating apparel with zero waste led to Remnant Lab, “a new collaborative and evolving project with three cornerstones,” Simpson-Scupelli says, “to discover innovative ways to breathe new life into cut-aways from our collections, to divert textile waste from landfills and to delight our customers with high quality, one- or few-of-a-kind handmade pieces that tell a story.” Remnant Lab works with students, interns and local artists to create jewelry, clutches, totes and pillows. The collaborations have gone so far as using juicing scraps from Reed&Co, a Lawrenceville healthy food and juice bar, to dye fabrics. Now almost every scrap is used, and research continues to see if the smallest can be shredded and used as stuffing.

Listening to Simpson-Scupelli talk, surrounded by like-minded Pittsburgh artists and creators, it feels as though she has been working towards this moment since the beginning. “Make+Matter strives to create a hub of high-quality, local design in the heart of Pittsburgh, specializing in ethically made, eco-friendly clothing, accessories and objects for your home,” she says. Make+Matter is not only a retail space, but is also a working studio; all production for Kelly Lane and Remnant Lab is either done on-site or by local independent seamstresses. One thing you will not see in this space is fabric in the trash.

This article appears in the September 2018 issue of Pittsburgh Magazine.
Categories: Arts & Entertainment, From the Magazine, Hot Reads