Plus, 'Rocky Horror' beckons audiences, a bluegrass duo performs at Calliope and a Cake Boss comes to town. 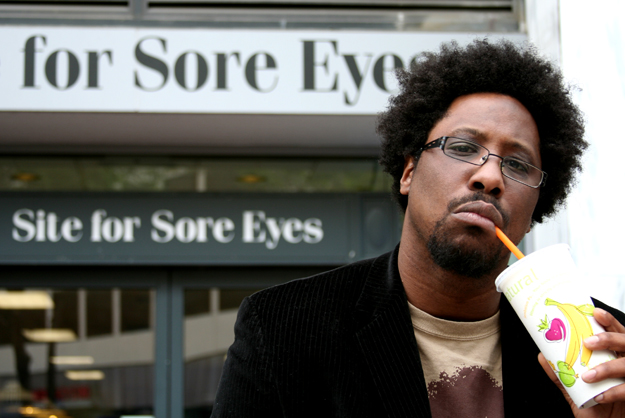 W. Kamau Bell brings comedy to Papa J’s
The credits of underground stand-up superstar W. Kamau Bell are hard to deny. His one-man show, “The W. Kamau Bell Curve: Ending Racism in About an Hour,” was a sold-out favorite in San Francisco before moving to New York and the Edinburgh festival. SF Weekly named him Comedian of the Year for 2010, and Time Out NY gave Bell’s show a four-star rating and named him a Critic’s Pick. His album, Face Full of Flour, was called one of the 10 best of 2010 by Punchline magazine. Robin Williams said that Bell is “ferociously funny.”

Bell’s material, though, is far removed from the comedy-club norm. Tackling issues of race and class, Bell manages to weave serious discourse into stand-up in a format that makes both the comedy and the commentary stand out. If you’ve never encountered stand-up that pushes the boundaries of the genre, Bell is a great place to start. You’ll have your chance Saturday night at Papa J’s Centro, a rising venue for comedy in the ‘Burgh; local standout Ron Placone will open the show.

Dammit, Janet, it’s that time of year again
As a recovering Rocky Horror Picture Show addict, it’s difficult for me to talk to you about that particular cult phenomenon without risking relapse. And I've finally got my sleep schedule back to normal again after a solid year of dancing in front of movie screens at 1 a.m., so I’m not looking to fall off the wagon. Nevertheless, it’s a few weeks until Halloween, and so it’s my duty to direct you to this season’s top Rocky Horror destinations. This week’s edition of After Dark offers a trio of opportunities to do the Time Warp again. Get your fishnets ready.

Stand up against homelessness Thursday, Oct. 20 with Homeless Children’s Education Fund. Be a part of a performance art installation on the lawn of Soldiers & Sailors in Oakland, and listen to the stories of inspirational speaker Roy Juarez, Jr. A day of your time can make a lifetime of difference.For more information, please visit homelessfund.org.

The Honey Dewdrops perform in showcase
The popular Acoustic Masters series presented by Calliope: The Pittsburgh Folk Music Society is under way, with a slate of world-class artists in the lineup. In the meantime, though, you can catch rising stars in performance at Calliope’s Center Stage Concerts at the Pittsburgh Center for the Arts. Tonight, it’s rising bluegrass duo The Honey Dewdrops. Virginia natives Laura Wortman and Kagey Parrish announced their arrival on the bluegrass scene with a memorable performance on “A Prairie Home Companion” before releasing a pair of critically-beloved albums. Seating is limited, so get your tickets now!

In theaters this weekend
New films coming to Pittsburgh this weekend include: a third trip into an over-monitored haunted house with Paranormal Activity 3; a second visit from the poor man’s Austin Powers in Johnny English Reborn; a millionth treatment of The Three Musketeers; and an ultra-rare original concept, Emilio Estevez’s The Way. PM Film Editor Sean Collier will be on the 102.5 WDVE Morning Show tomorrow at 7:15 a.m. to review Paranormal Activity 3 and Johnny English Reborn. Sean grudgingly admits being scared stupid by the original Paranormal Activity—but will the third film in the series leave him screaming or yawning? Find out tomorrow morning!

The Cake Boss is comin' to town! Buddy Valastro, star of TLC's "Cake Boss," will be at Soldiers and Sailors Hall this Sunday.  He will demonstrate cake-making, tell stories about his famous family and show you why he is the one and only "Cake Boss." READ MORE.