View Pittsburgh & Its People From The 1850s Through Today

#pixburgh: A Photographic Experience features images from the Sen. John Heinz History Center vault, which contains close to 1 million images. The show features a sampling of 400 images from the 1850s through today — including landmarks, fun, folly and floods. 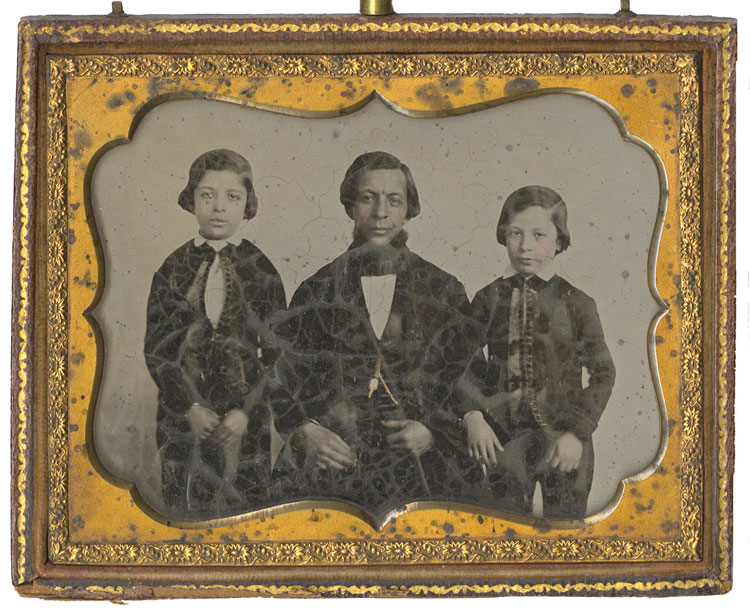 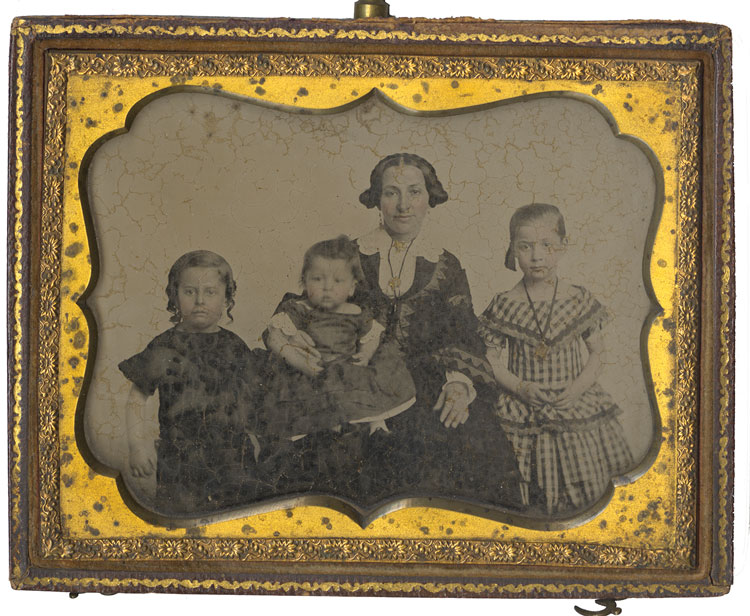 William and Pauline Frank and their children, early 1850s
German immigrants William Frank and Pauline Wormser, who married in 1843, were among the first Jewish families to settle in Pittsburgh. Active in both the business and philanthropic communities, William operated a dry-goods store and later a glass factory and was among the founders of Rodef Shalom congregation. Pauline founded the Jewish Ladies’ Relief Association, which assisted with fundraising to aid Civil War soldiers. 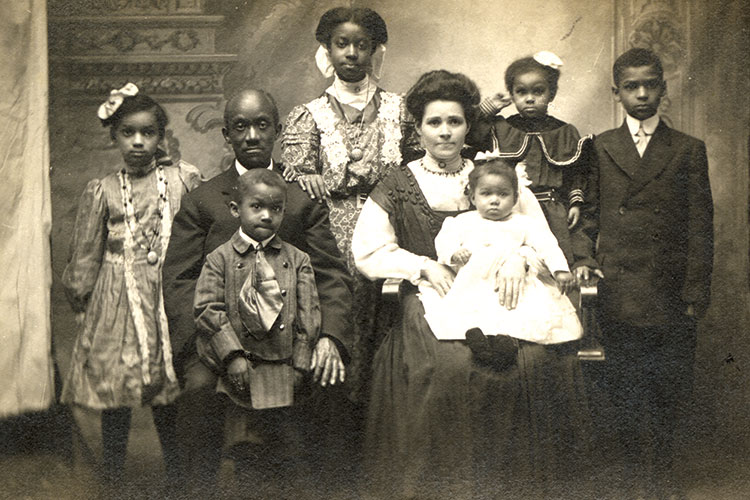 Dr. George and Mary Turfley and family, c. 1900
George Turfley, the first registered African-American physician in Allegheny County, had his home and general practice in the Hill District. The beloved doctor attended patients for 56 years. 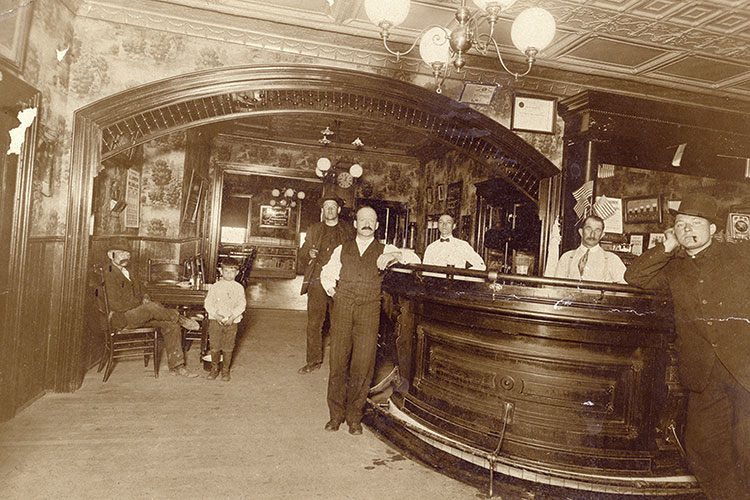 South Side Saloon, c. 1900
A small group of patrons poses for the camera along with two bartenders in this image of the interior of a South Side saloon at the turn of the century. Seeing a child among them was not surprising; many saloons were also family-run businesses, with relatives sometimes living in the upper floors of the same building. Saloons outside Downtown also catered to the preferences of specific ethnic groups. For some of these groups, a family trip to a public space such as a saloon would naturally involve children. 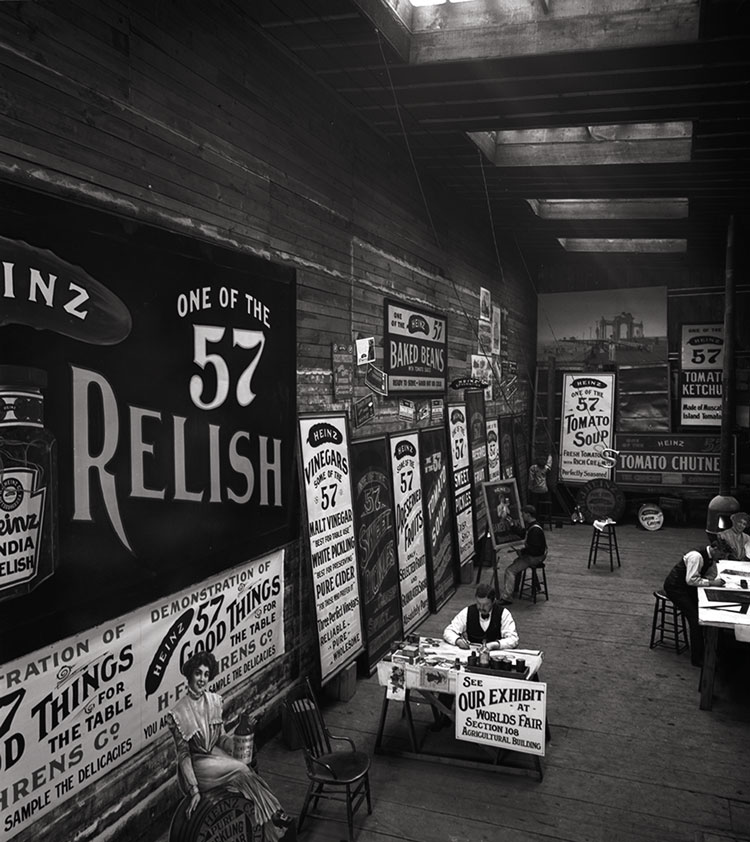 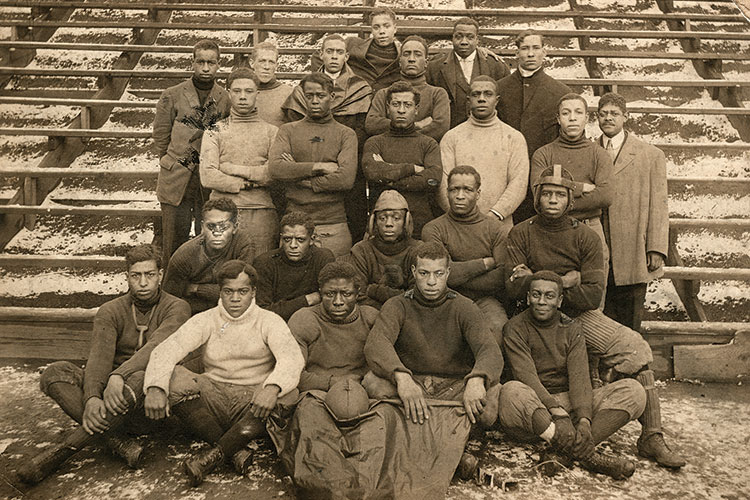 Collins Tigers, c. 1912
James Dorsey (front row, second from right) was well known locally for his athletic prowess, and formed his own basketball and football teams. After taking physical-education classes at the University of Pittsburgh, he served as recreation director at Washington Park, the Crawford Bath House, Centre Avenue YMCA, and the Ammon Center. He also won local renown as the only African American to pass the examination required to join the English Folk Dancing Society. 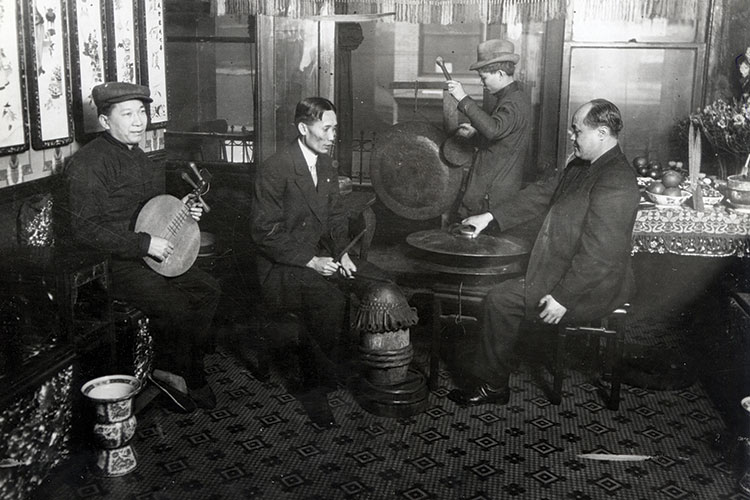 Men play traditional instruments in Chinatown, 1912
Remnants of a now-vanished Downtown community, these musicians were part of Pittsburgh’s Chinatown. By the early 1900s, the community featured a park, multiple stores and two competing Chinese fraternal organizations. The community was never very large, and when construction on the Boulevard of the Allies started in 1921, the new roadwork eventually crowded out most of the stores and businesses. By the 1950s, only three families remained. 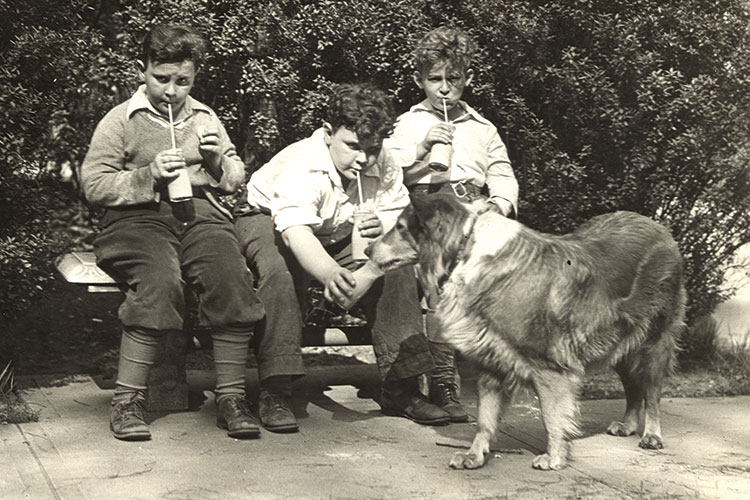 Wanda and Friends, 1934
The Irene Kaufmann Settlement in the Hill District offered milk to provide children with a source of nutrition during the Depression. Resident Director Sidney A. Teller’s dog, Wanda, shares the snack with neighborhood children. 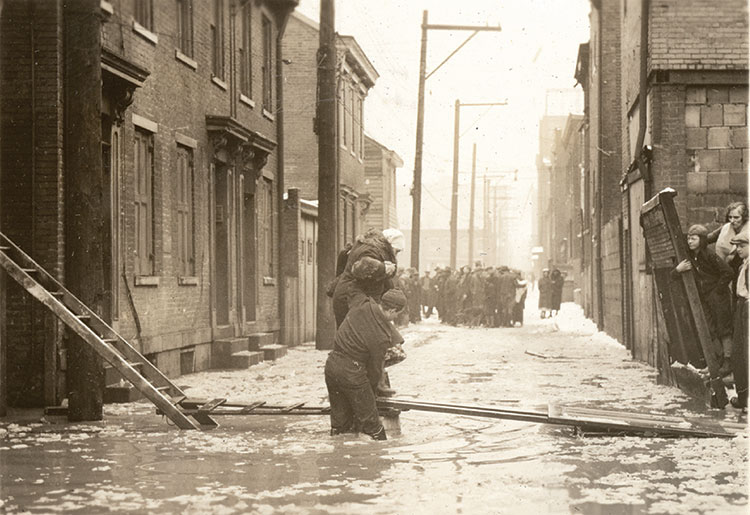 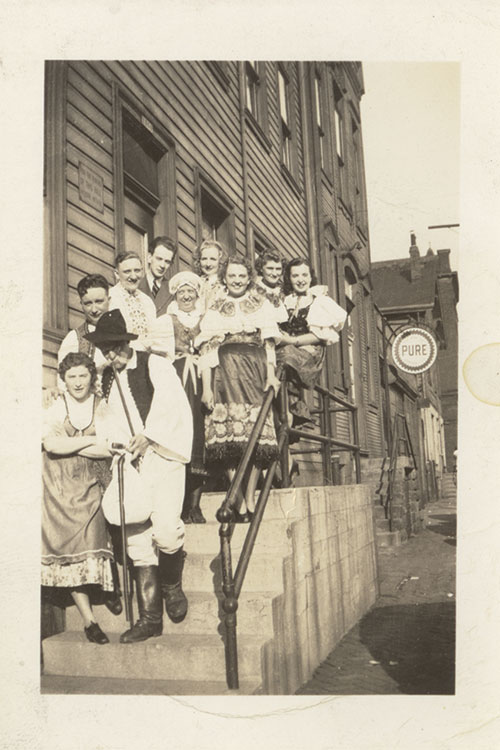 Ohio River Celebration, 1929
Pittsburghers line the Monongahela Wharf to see the flagship steamer City of Cincinnati and celebrate the canalization of the Ohio River from Pittsburgh to Cairo, Ill. The completion of the project was the culmination of more than a century of river improvements on the Ohio, a sustained effort prompted by the rise of the steamboat era on western rivers, starting in Pittsburgh in the 1820s. 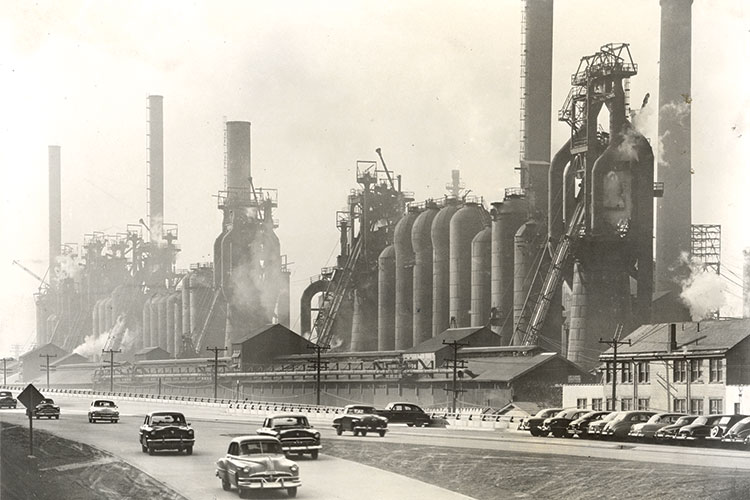 The Eliza Blast Furnaces at J&L, Hazelwood, 1950s
James Laughlin built the Eliza blast furnace along the Monongahela River in Hazelwood in 1859. A few years later, he joined with B.F. Jones, who had rolling mills across the river on the South Side. Together they formed Jones & Laughlin, or J&L Steel Co. The blast furnaces dominated the neighborhood until they were torn down in 1983. 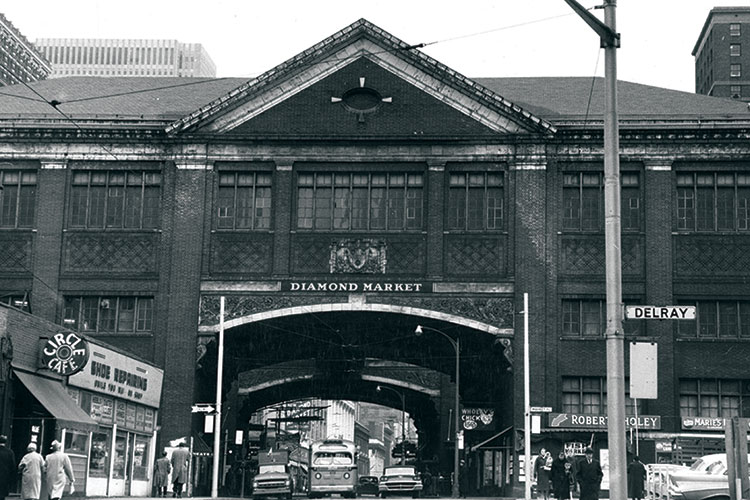 The Diamond Market, c. 1960
For 47 years the Diamond Market presided over the activities of the space now known as Market Square. Home to a regular clientele of market stands as well as a roller-skating rink, the structure’s condition became an issue after a piece of decorative cornice fell off and injured a woman. The market closed on Dec. 31, 1960, and was demolished the following summer. 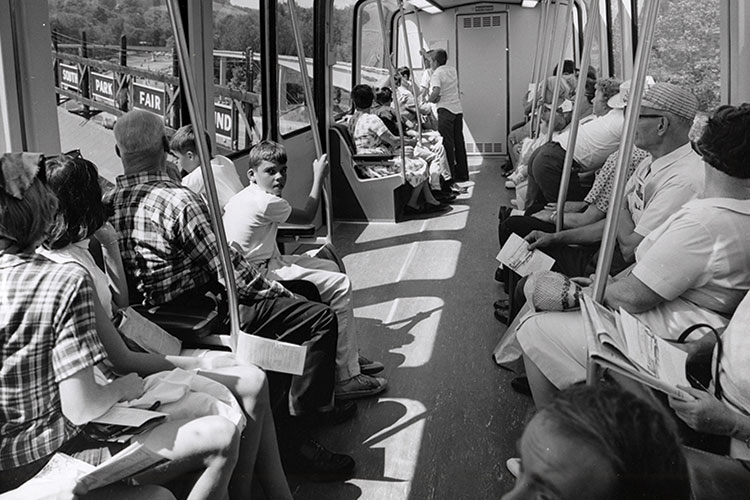 South Park Fairgrounds Skybus, c. 1965
Skybus, a prototype elevated monorail meant to replace the region’s tangle of buses and trolleys, ran on a 2-mile loop around the South Park Fairgrounds from 1965 to 1971. Mired in financial and political battles, the Skybus project ended in the early 1970s. 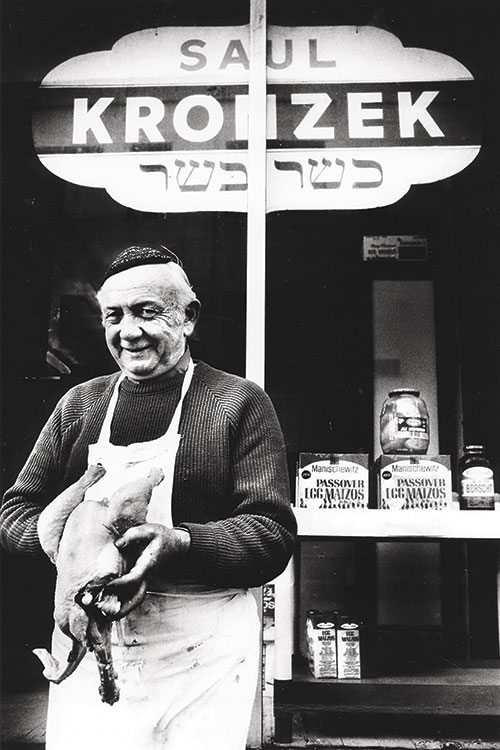 Saul Kronzek outside his shop in Highland Park, 1987
Saul and his family fled anti-Semitism in Poland and came to Pittsburgh in 1927. Though he had studied to be a rabbi, Saul took a job as an apprentice butcher to help support the family.

This article appears in the February 2017 issue of Pittsburgh Magazine.
Categories: Community Feature, From the Magazine, Hot Reads